The Fault in Our Stars Featured 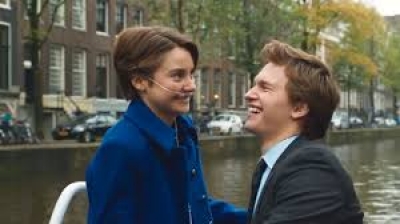 Yes this is truly a boy meets girl story, boy gets girl but only as long as time allows. Hazel (Shailene Woodley), the girl that starred in Divergent, is dying of cancer at the age of seventeen. Technically she should have died at the age of thirteen but she did not due to a positive reaction to medications. She is suffering from depression and her parents Frannie (Laura Dern) and Michael (Sam Trammell) recommend she attend a support group at the local church. It is in this group of young adults that not only does Hazel begin to lose her routine of television, doctors and medications on a daily basis but it is within the group that she meets Augustus (Ansel Elgort) a young attractive man that not too long ago in life lost his leg to cancer. It is Gus that also helps out his friend Isaac (Nat Wolff) who is going blind but is still dating a hot girlfriend, Monica (Emily Peachey) at least until he loses his entire sight.

It’s not long after Hazel and Gus meet in which they become good friends and soon thereafter help each other not to fear oblivion and understand that pain demands to be felt. Yet still their attraction grows and soon it reveals to each other that ok is their always no matter what life throws at them. Hazel is a fan of a novel by Peter Van Houten (Willem Dafoe) and requests that Gus read it while he requests she follow the video games he so loves to play. It is not long after that Gus writes to Houten about Hazels love for his work and receives a reply. Not too long thereafter Hazel, Gus and her mother are on a plane to meet Houten in Amsterdam but sadly things are not always as they appear to be sometimes and disappointment becomes the true reality in life leaving Hazel’s questions unanswered. If not for Lidewij (Lotte Verbeek) their trip may not have been worth the effort and those words that everyone longs to hear, “I love you” may not have been spoken in return. Truthfully this film takes you on a journey into the discovery of love between two young people that do not have time on their side.

The world is not a wish granting factory and sometimes well most of the time in the real world people live and die around us all. Someone is grieving the loss of a loved one every second and you may not know them but that does not make them less important. Truly in life and love we only need one admirer since it could be that person that loves you that will change your life forever no matter what the circumstances. Sometimes we may ask ourselves what is enough? The answer is the love from another and the fact that they will remember you after death. Love is giving someone a forever no matter what the numbered days may be. Yet in life if you want the rainbow you will have to deal with the rain. Life comes from life yet death can be forever sealed within the last letter.

I must say I absolutely loved this film based on the book from John Green. It is not a difficult story to follow but once you get invested in the characters you too will fall in love and enjoy their journey of life, love and death. The bells and whistles within this story are truly the writing which helps you to understand death and the meaning of life. People come in and out of our lives every day and I have often stated that it is the quality of friends rather than the quantity that matters but in reality it is that one special person that you hopefully meet in life that will forever be your lifeline. A beautiful score and some wonderful direction help to make this romantic drama worth seeing in the theater but beware even though you will extract many messages about life and love you may want to pack some tissues for your own journey into the lives of Hazel and Gus.

Woodley and Elgort are both from the recent film, Divergent, and both are truly a match made in heaven that work well together on the screen. Wolff is a good support and adds a bit of levity to his challenges in life. Dern and Trammell are both nicely matched as the parents of Hazel but it is Dafoe that steals his on screen time. Overall a nicely developed movie that is sure to attract a female audience out to shed a tear on the weekend. I did not know what to expect from this film but was pleasantly surprised on just how engrossed I got pulling out small messages that were honestly a reflection of my own world. Written and appreciated for the messages of love woven throughout this story with three paws out of four, I’m Jon Patch.

More in this category: « Edge of Tomorrow 22 Jump Street »
back to top

We have 204 guests and no members online