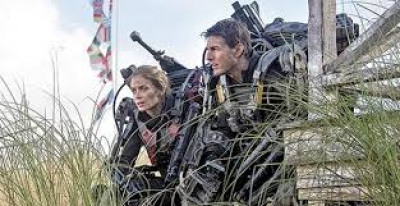 Warner Bros. Pictures, Village Roadshow Pictures and 3 Arts Entertainment present a PG-13, 113 minute, Action, Sci-Fi, directed by Doug Liman, written by Christopher McQuarrie, Jez Butterworth, John-Henry Butterworth, based on the novel “All You Need Is Kill” by Hiroshi Sakurazaka with a theater release date of June 6, 2014.

An alien invasion has taken over the world and the only option for mankind to survive is to fight before it’s too late. Major Cage (Tom Cruise) has been flown to the United Defense Forces Headquarters in London to meet with General Brigham (Brendan Gleeson) but little does Cage know that his future soon holds military combat. Cage is a cowardly soldier that has never seen a battle field let along blood yet when he tries to bribe his way out of going to the front line he instead gets arrested and sent to combat training. He is soon linked up with the J Squad led by Master Sergeant Farell (Bill Paxton) along with squad members Skinner (Jonas Armstrong), Kimmel (Tony Way), Griff (Kick Gurry) Ford (Franz Drameh), Kuntz (Dragomir Mrsic), Nance (Charlotte Riley) and a number of other fighting personnel that are strapped into robotic type armor. There motto “no courage without fear” and Cage has a lot of fear and not much courage.

First day into battle Cage is sweating, unaware on how to even operate his equipment and when he is suddenly dropped into the battle ground he not only gets abruptly introduced to the “Angel of Verdun” Rita (Emily Blunt) but also a terrorizing battlefield of aliens but when attacked and killed something happens to Cage causing him to constantly repeat his days at war. One advantage of course is that when he returns each time to battle he has an advanced knowledge of been here done that memories that help to not only advance his efforts at war but gain the courage to fight and learn the truth about how to stop this alien race, problem is he has to die every time in order to advance his intelligence.

It seems Rita is aware of his special powers and recommends he keep it a secret in order to protect his life from his own military and that of the Mimics. She takes on the challenge of training Cage for combat and along the way a relationship begins to develop, one that may live or die based on how far they can go. Bottom line, an enemy that knows their future can’t lose. Or can they?

Liman does an excellent job of directing this film and the writers give it dramatics, intrigue, power, mystery, levity and character development all combined into a superb action film. I must say I did not have great expectations on this alien film that steals many moments from earlier films like Alien, Groundhog Day, Source Code, The Butterfly Effect, Starship Troopers amongst many other films but so be it the film is still very much worth seeing at the theater with your 3D glasses on face. Great CGI and special effects laced with a dramatic score and this story is filmed brilliantly especially since the recurring days that are similar are more than different enough so as not to lose interest.

Cruise really takes on this role especially after he gets into the gritty part of combat. Blunt is able to kick butt just as good as the men in this film while still maintaining a sense of attractiveness along the way. Gleeson has a small role but performs it with authority and finesse and although Paxton came across as a bit awkward at times he still carries his own weight in the story. Other than the many extras involved in the making of the film, the supporting characters were a welcome addition to a very well done movie that should help to elevate Cruise’s career once again as one of the top leading men in Hollywood. Written and enjoyed with three paws out four by Jon Patch.

More in this category: « A Million Ways to Die in the West The Fault in Our Stars »
back to top