A Million Ways to Die in the West Featured 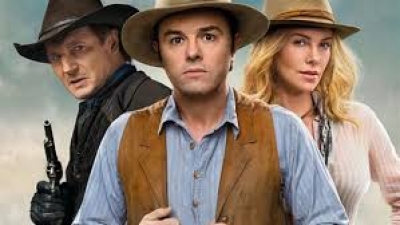 Set in Arizona, year 1882, on the American Frontier, two men stand in the middle of a dirt road in the center of town ready to gun fight. Albert Stark (Seth MacFarlane) is the town’s cowardly local sheep farmer who owes money to another gun touting local and if he doesn’t get his money Albert is a dead man. One amicable solution later, Albert lives but his girlfriend Louise (Amanda Seyfried) dumps him for another, Foy (Neil Patrick Harris), the local moustache shop owner. Apparently Louise did not like the fact that Albert who still lives with his parents is not only a coward but one heck of a nice guy who would not do wrong by anyone so she appears to think the grass is greener on the other side. Well in this case the dirt is darker maybe! I feel your pain Albert!

At the local whore house Millie (Alex Borstein) is pouring the drinks and Ruth (Sarah Silverman) is hard at work, literally! Well maybe not her but her customers sure are! All except her boyfriend Edward (Giovanni Ribisi) who has never had sex due to Ruth’s Christian values. Yes this film pokes fun at every possible ethnic and religious group known to man. Meanwhile Albert is just distraught over losing Louise and decides later to drink and ride. Not a good idea but after telling Louise he loves her and she does not sometimes the pain is too much to bare.

Off in the not too far distance Clinch (Liam Neeson), the man most wanted and his posse along with his wife Anna (Charlize Theron) are riding their way into town. First to arrive, Anna and her recently adopted dog, Plugger, along with posse member Lewis (Evan Jones) who pose as siblings in order to fit in and look unsuspicious. Not a good look for either of them! Soon though after a bar room brawl Anna and Albert become very close friends and after some time she not only teaches Albert how to appreciate himself but also how to shoot, along with a few other things. She informs Albert that sometimes a girl has to get a few assholes out of her system in order to really see the good guy in front of her. Yes we are talking about Louise and Albert. It’s not until the County Fair that the two couples have a confrontation leading up to a one dollar bet which was a lot of money back then. Photo shots, games to play, a barn dance that leads to the now infamous Moustache song written by Stephen Foster all lead up to the infamous kiss amongst friends bringing Albert back to the future.

Once Clinch hears of this kiss he is in town and looking to end the life of the man that got in the way of his marriage. Grant it Albert had no idea Anna was married. Soon thereafter a jealous husband, a message of love, a sheep’s penis and Albert is off on a run that is until he gets kidnapped by Indians led by Cochise (Wes Studi). Sometime later Albert is tripping, leading up to yet another gun fight, love and happy trails for some. Remember to stay past the credits for yet another racial moment not unexpected from MacFarlane.

This film is raunchy yet hysterical and actually is well directed, written and scored. The cinematography is outstanding and as for the western theme it works so well that you will find yourself laughing from beginning to end. Grant it, this is not a family film by no means but albeit get a babysitter and check this one out it’s worth it. Ironically I felt that this story in this moment in time reflected my exact life right now less the sheep but otherwise right on target with my life and time now. Even the animals in the film were plentiful yet not abused, thankfully.

MacFarlane, the Jack of all trades in this film is ideal in so many ways. Theron not only looks good but as usual is right on the mark. Seyfriend is truthfully not my favorite actress but she performs well here. Neeson was revealing, and Ribisi hysterical in so many ways but it is Silverman that really packs the sexual innuendoes and crosses the line a bit. Harris is perfection right down to his number two moments. Everything about this film is somewhat of an insult but that aside it is truly hysterical, filled with cameos and highly recommended and to be taken with a grain of salt. Written with three paws out of four by Jon Patch.

More in this category: « Maleficent Edge of Tomorrow »
back to top