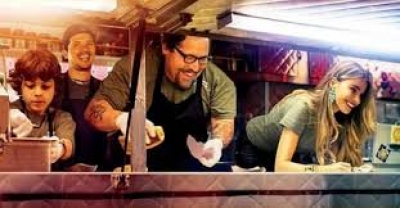 Open Road Films and Aldamisa Entertainment present an R rated, 115 minute, comedy, directed and written by Jon Favreau with a theater release date of May 23, 2014.

The film opens to Chef Carl Casper (Jon Favreau) in his restaurant kitchen preparing a beautiful medley of chopped vegetables and fruits but then it takes a turn towards the dark side if you’re an animal lover and apparently others in the theater were besides me as we witness a pig tossed up on the counter then butchered for the evening meal. That evening Carl is preparing a menu for a very important critic, his biggest fan, Ramsey Michel (Oliver Platt).   Carl’s staff, Martin (John Leguizamo), Tony (Bobby Cannavale) and Molly (Scarlett Johansson) are prepping the kitchen for what Carl believes will be one fantastic experience for the palate. One problem enters the kitchen, the owner Riva (Dustin Hoffman) as he demands the regular menu they always serve and not Chef Carl’s elaborate cuisine. Soon thereafter the war begins on twitter between Ramsey and Chef Carl due to a bad menu and a lousy lava cake and before you know it the world is at hand witnessing the beginning of a meltdown.

Chef Carl Casper is a workaholic who loves to cook and by doing so has neglected his son Percy (Emjay Anthony) who he had with his ex-wife Inez (Sofia Vergara). It’s not until a second encounter with Riva that sparks an eruption in Carl causing him to realize he feels unhappy and lost in his current world. After some convincing by Inez to take a trip to Miami from Los Angeles with her and Percy as a getaway does Carl realize, with the help of Inez and her other ex-husband Marvin (Robert Downey Jr.), that life once again can be exciting and new . Carl’s future looks like a food truck called El Jefe that will specialize in authentic Cuban food which he and his new associate Martin with help from Percy will clean, prep and cook their hearts out in for the American people.

Soon Percy and Carl are bonding and after a bit of tender loving care from both of them and Martin the food truck is open for business. A road trip across country from Florida to California with several stops along the way the food truck is selling out especially thanks to Percy and his expertise on twitter. Life is good and a father and son have bonded and the food they make is phenomenal except don’t try the cornstarch hush puppies, not a good idea! In the end, after some one second videos a Chef finally becomes a father and an unhappy life for all is no longer unhappy nor lost and thanks to a certain twitter enemy El Jefe has become grounded.

I absolutely loved this film and the use of twitter messages incorporated in the picture was brilliantly well done. It had a great story some wonderful character development and just an all-around feel good comedy with some great Latin beats and relationship building moments sure to make each and every audience member feel good about family and of course food. Grant it the pig scene could have been left on the editing floor or at least left to the imagination but other than that this is truly a nice film to go see one evening with a date or family.

Favreau does a wonderful job as director, writer and lead actor. Sadly the film will probably not be winning any major awards but it is still a must see in my book. Leguizamo is a welcome addition that works side by side with Favreau, both seem to complement each other well. Cannavale, Johansson and Vergara don’t have huge roles but they are an asset to the story. I must say even though Hoffman had the smallest on screen time I thought his character was a bit weak and I would have probably went with someone a bit more authoritative for his character. Platt is always a charm and once again brings a smile to my face when I see him on the screen. There are a number of other cameos in the picture which adds some substance to the movie that are not absolutely necessary since this film stands well enough on its own just by story alone. Written and enjoyed with two and half paws out of four by Jon Patch. Bon Appetite!

More in this category: « X Men: Days of Future Past Maleficent »
back to top

We have 343 guests and no members online