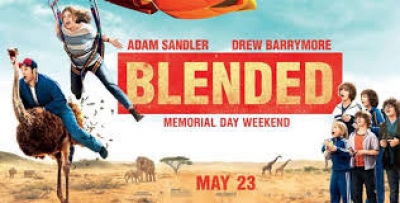 When the Closet Queen Lauren (Drew Barrymore) gets set up on a blind date with Dick’s Sporting Goods employee Jim (Adam Sandler) things at Hooters could not go any worse. Lauren is a single mother of two sons Brendan (Braxton Beckham) the babysitter obsessed young man on the verge of puberty and Tyler (Kyle Red Silberstein) the boy with more energy than he knows what to do with especially when things don’t go his way. Lauren’s ex is Mark (Joel McHale) the irresponsible father that makes time only for him and not the boys. Jim lost his wife to cancer and raised his three daughters Hilary (Bella Thorne) who everyone thinks is a boy, Espn (Emma Fuhrmann) who cannot let go of her mother and believes she is still invisible yet with her all the time and Lou (Alyvia Alyn Lind) the youngest of the three girls. Needless to say when the blind date went bad and Jim had to end it early due to an avalanche in his backyard the hopes of any type of relationship between the two was next to never.

Yet when Jim returns Lauren’s credit card after an altercation at a local store he and Lauren both discover from her co-worker Jen (Wendi McLendon-Covey) who happens to be dating the owner of Dick’s stores that they are not going to Africa so both Lauren and Jim unknowingly buy at a reduced rate the tickets for the trip. When they all show up at the same time in Africa at the hotel greeted by Mfana (Abdoulaye NGom) Lauren and Jim who very much despise each other discover that for the next week they will all be living in very close quarters, together.

During their time together a lot of bonding occurs between all of the members from each family. Hilary becomes a young woman after a makeover and dad decides finally to let her enjoy being a girl while allowing her to spend time with Jake (Zak Henn) the son of Eddy (Kevin Nealon) who is also on vacation in Africa with his partner Ginger (Jessica Lowe). Espn finally begins to let go of her mother holding on to the memories and Lou has taken to Lauren and does not want to let go. Tyler is finally hitting the ball and Brendan has finally released the beast but the biggest and most rewarding achievement was between Lauren and Jim who both discover that in life sometimes moving forward is better than moving back. Somewhere over the rainbow dreams do come true. Falling in love, making rhino love, listening to the monkey’s, saying I’m sorry can all lead up to the kiss and the realization that “I can do this”.

I like the teaming again of Sandler and Barrymore, they obviously make a good leading pair of actors for comedy. The film is directed well with some even better writing but sadly enough the story is a bit cheesy and off course until about half way in to the movie. Basically half way into the story the characters become more interesting, better developed and much more relatable with a mix of drama added into the comedy. The best part of the film though happens to be the footage in Africa which makes me want to go and I would if I could afford it since this film does a great job of representing a must go on vacation there. Even the score and soundtrack is fun and appropriate to the environment but it is Nickens (Terry Crews) that truly puts a huge comedic spin on the music in the film. If they were able to make the first half of the film as good as the last this movie would have truly been higher on my list to see in the theater. It seems that Sandler has been losing his way in movies but is trying diligently to find the right formula that works like it once did.   Bring back Bob Barker to his next endeavor!

Sandler and Barrymore both play well together and you can just tell the chemistry that they have between them. Thorne, Fuhrmann, Lind, Silverstein and Beckham all perform well with the award going to Fuhrmann in her scene with her father as she decides to let go of the past and Lind is just a joy to watch. Crews is absolutely hysterical, Nealon who I have hung out with in LA will never change but as he is getting and looking older he needs too and as for McLendon-Covey she steals the moments when she appears on screen. Overall a fun movie but like I said much more to offer in the last half of the story than the first but either way I’d still see it in the theater but if not I’m sure it will be on DVD before you know it, although the animals of Africa on the big screen are breath-taking. Written and enjoyed with two paws out of four by Jon Patch.

More in this category: « The Trials of Kate McCall X Men: Days of Future Past »
back to top

We have 324 guests and no members online