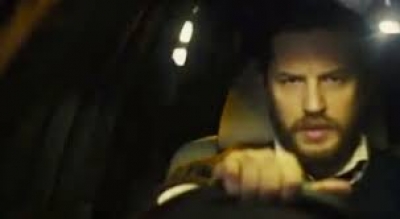 A24, IM Global and Shoebox Films present an R rated, 85 minute, drama, thriller, directed and written by Steven Knight with a theater release date of May 16, 2014.

Ivan Locke (Tom Hardy) sets out on a short journey to London in his BMW after discovering that a medical emergency has occurred that indirectly but directly affects his life. A man loved by everyone and known for doing everything in life right by all standards is about to discover that once versus never is the same as good versus bad and that the ultimate difference between once and never is everything.

Along his journey he has several conversations with Bethan (voice of Olivia Coleman), the reason for his journey, Katrina (voice of Ruth Wilson) his wife and mother of Eddie (voice of Tom Holland) and Sean (voice of Bill Milner), coworker Donal (voice of Andrew Scott), his boss Gareth (voice of Ben Daniels) who is in charge with Locke of a 100 million dollar concrete project from Chicago, along with a few other people in his life. Little does Locke know though that as he travels the highways towards his final destination the life he once knew will never be the same all because he is trying to do right thing. When not on the phone he even argues with his father over the wrongs he caused in his life while growing up. Overall complications continue to pile up in his business, personal and emotional life throughout his journey from point A to point B yet in the end all he needs to do is “listen”.

An amazing job by the director and writer Steven Knight as he keeps your attention for 85 minutes while the character Locke drives to London alone in his BMW, with highway images laced over a great score that helps to pass the time. In many ways we all can relate to some of his conversations in one way or another. Have you ever told someone you loved them and they could not say it back? Have you ever made one mistake in your life that you truly regretted? Have you ever blamed your parent for the way you grew up? Has your life drastically changed for the worse in just a few hours? Some say life would be boring without change! I say life would be wonderful if it was change for the good but I guess that’s a dream, a prayer, a wish that in life there is no bad! As Locke beautifully portrayed by Hardy in this film reveals through his raw emotions and reactions to his swiftly changing life there is always going to be choices that will forever affect our lives like his for once versus never, good versus bad, yet sometimes in order to survive all we need to do is just listen. Even though the film is somewhat uneventful in terms of images it is emotionally riveting thanks to Hardy. Written and appreciated with two paws out of four by Jon Patch.

More in this category: « Godzilla The Trials of Kate McCall »
back to top