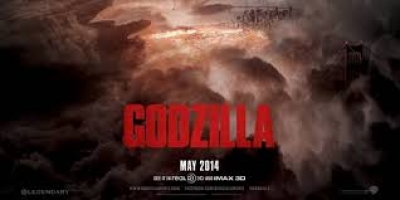 In 1954 the government partook in a top secret project called, Monarch. In order to rectify the projects potential threat to humanity an atomic bomb was used to eradicate the problem.

The Philippines in 1999, scientists enter into a cave at the Universal Western Mining project where they discover the fossilized remains of a huge creature and it looks like at some point something burst out in search of its freedom. Joe Brody (Bryan Cranston) and his wife Sandra (Juliette Binoche) are living in Janjira, Japan with their young son Ford (CJ Adams) and on this particular day they are going to celebrate dad’s birthday. When Ford goes to school his parents head to work, both working at the nuclear power plant and with recent tremors happening possibilities are high of a possible reactor breech. Yet when it happens and the plant literally implodes life for Ford changes forever.

Fifteen years later, Ford Brody (Aaron Taylor-Johnson) is living in San Francisco with his wife Elle (Elizabeth Olsen) and their young son Sam (Carson Bolde). He receives word that his father Joe has once again been arrested in Japan for entering a restricted area. It happens to be where he and his family lived fifteen years ago before the accident but Joe knows that the government is hiding something in that area and it’s not nuclear fallout. So when Ford arrives in Tokyo to bail out his father he eventually finds himself in the same predicament as his dad but this time when arrested they are taken out to the reactor site for questioning. It is not to long after their interrogation that all hell breaks loose, literally, this time in the form of some huge flying insect which after causing mass destruction flies off in search of food which happens to be nuclear devices.

Dr. Ichiro Serizawa (Ken Watanabe) with the help of Vivienne Graham (Sally Hawkins) and the advice of Joe Brody discover the meaning behind the electromagnetic pulses they have been studying which clarifies that the earthquakes are not natural but rather caused by echolocation. The U.S. Navy soon gets involved with forces led by Admiral William Stenz (David Strathaim) and Captain Russell Hampton (Richard T. Jones) but their plan A turns out not to be the right plan at all and soon thereafter Ford who was trying to get home to San Francisco by way of Honolulu Hawaii is once again a major part of the equation to kill the giant bugs. When Godzilla awakens a Tsunami wipes out thousands and as for Vegas Elvis has definitely left the building with nowhere to return to any time soon. Tactical Operations Command is set up in Oakland, California but it seems the only way to kill the bugs is to let them battle with Godzilla that has risen from the sea to become the savior of the city.

I really had high expectations for this film since the trailers looked so great and by no means was I disappointed but it did miss my high expectations mark slightly. Probably some of the best CGI with the help of 3D and IMAX I’ve seen in a while along with a thrilling score but as for the writing it seemed to have big character development in the beginning but once the creatures start to battle the characters kind of fade to black. No gigantic complaint about that since the monsters are the true characters here but realistically the film showed a lot of the bugs and very little of the actual star of the movie, Godzilla, at least until about an hour into the story. Overall though with a few lulls in the script this film keeps a good pace with some phenomenal special effects. Grant it I think Godzilla has been eating a little too much lately since he seemed slightly pudgy, like the original, that aside he or she can still so many years later kick some butt when he needs to.

As for the acting, I liked Taylor-Johnson who seemed to get a bit better once the audience gets more interested in his story. Olsen although she doesn’t have a huge role she definitely supports it well. Watanabe was spot on as the scientist looking for clues and Cranston was superb. Too bad Binoche was under-used but she was a good setup for story line. The kids were all great supports and the use of the dogs and birds as messages to what may be coming was perfection yet overall it turns out to be the big scary guy that steals the show and rightfully so since he is Godzilla. I’d definitely experience this film on the big screen rather than DVD yet I’m sure it will find its way into my personal collection someday down the line. Written and enjoyed especially for the CGI with three paws out of four, I’m Jon Patch.