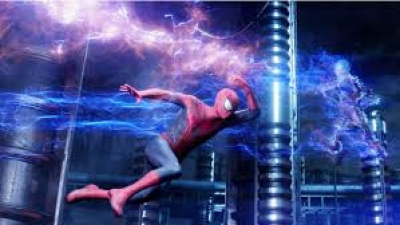 Richard Parker (Campbell Scott), a scientist at Oscorp is fleeing the country with his wife Mary (Embeth Davidtz), leaving behind their young son Peter (Max Charles)in the hopes that he will not be harmed because of the secrets of the Roosevelt project Richard created for Norman Osborn (Chris Cooper)the owner of Oscorp. Matters don’t always turn out as one may plan and Peter is soon left without his parents both of whom he was told were traitors to their country. Raised by his Aunt May (Sally Field) since his Uncle died Peter (Andrew Garfield) now grown and graduated from school has strong feelings for his girlfriend Gwen (Emma Stone) but apparently not strong enough to repeat her words of “I love you”.

Peter is living in New York swinging happily from one building to another, protecting the civilians of the big apple. Alistair Smythe (Paul Giamatti) is driving a truck full of plutonium through the streets of the city while dozens of police cars are in hot pursuit but once again a man of great powers who is aware of his great responsibilities has swung in to save yet another day. Peter is constantly having visions of Gwen’s father Captain Stacy (Denis Leary) and fears that it is a true sign that he needs to leave Gwen out of his life and if not it could mean the end of hers.

Many in the city still struggle with the fact whether Spider-Man is amazing or a menace but for most he is truly amazing especially to Max Dillon (Jamie Foxx) an electrical engineer at Oscorp. A nerd who is unrecognizable to friends and associates Max becomes a victim to Oscorp’s Hydro-electric power system which literally lights up the whole city. Getting electrocuted and falling in a tank full of live electric eels Max is no longer unrecognizable as he emerges as Electro and due to his anger issues wreaks havoc on the citizens in Times Square. With super human electrical powers Electro soon destroys the famous Square in New York City and in a fight to the finish it is Spider-Man that puts an end to his path of destruction.

Norman Osborn is dying and leaves his fortunes to his son Harry (Dane DeHaan) but it is not only a gift but a curse when Harry discovers he shares the same disease as his father, the disease that took his life and now working at taking Harry’s life too. There is only one thing that can save Harry and that would be the blood from the spider bitten Spider-Man. Good luck since Spider-Man has no intension of giving it up willingly nor does Peter Parker, one in the same. When Harry decides to enlist the help of Electro he decides to take matters in his own hands by giving Electro the source of the city’s power which he uses to survive and in return Harry gets the spider venom needed to survive. One slight issue, Harry does survive but he soon becomes the Green Goblin trying to take down Spider-Man once and for all.

Matters grow worse in the love department for Peter when Gwen says she is leaving to attend Oxford University in England. She can no longer live telling Peter how much she loves him while he does nothing to share his words with her. Struggling with his failing relationship, life, the unknown truth of his parents and why they left him all his answers come eventually answered leaving him no choice but to decide what he truly wants in life. Secrets are revealed, feelings are proclaimed, villains still exist in the world and the set up for part three is made with hopes of continuing the Spider-Man franchise for a few more years. Oh there’s no place like home especially for some since it is there that they find their heart.

The film is nicely directed although a bit too long which makes some of the scenes too drawn out, causing a bit of a sleepy reaction to some moments. The writing is well done but at times some of the levity written in the story line is lost on some of the actors like Garfield. I truly miss Maguire who did a much nicer job as the web slinger than the current Spider-Man. A nice score accompanies some beautiful cinematography along with 3D effects help to make this film worth watching in the theater.

Garfield does justice to his role as Spider-Man but like I said I still miss Maguire who I thought did a much better acting job in the role. Stone is always nice to look at but this time although she has more presence on the screen she tends to get lost in the shuffle of the dialogue which this film is high on but low on action. Foxx I thought was brilliant as Electro but a bit over-done as Max Dillon the electrical engineer who I just did not get at first. DeHaan is a bit odd looking as Harry and even more so as the Goblin but he tends to pull this character off with conviction. Giamatti has a small role but he certainly stomps his way through it. Field is always a treat and once again does not disappoint. Overall the acting is well done by all, the direction is good, the writing a bit lost at times and the special effects good but far and in between for a Marvel film. Albeit I enjoyed the film it just did not meet my expectations and although the ending was a bit dramatic I would not have finished this story off the way that they did. Don’t look for some clues of the next film in the credits since there are none. Yes a bit disappointing! Written and enjoyed but not loved with two and half paws out of four by Jon Patch.

More in this category: « Brick Mansions Legend's of Oz - Dorothy's Return »
back to top

We have 487 guests and no members online