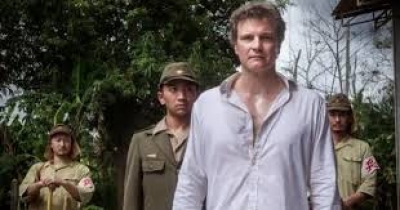 A group of middle-aged men are sitting in a Veterans club in England during the year 1980 when Eric (Colin Firth) decides to speak to his best friend Finlay (Stellan Skarsgard) and the others. A man who happens to love trains his entire life meets up with his true love Patti (Nicole Kidman) but he did not know she was his one true love until he stepped off the train. Sometime later, a meal, a kiss and a shaven face Patti decides to try and put him back together, together and shortly marries Eric. Little did she know the secrets that lay hidden within the depths of his soul, too painful for Eric to discuss with anyone, not Patti nor his military comrades. War leaves a mark and Patti is determined to fix him but can she?

Singapore, February 15, 1942, the fall of the British Empire, prisoners are taken which includes a young Eric (Jeremy Irvine) along with a young Finlay (Sam Reid) and many others. To build a railway through mountains and jungle the Japanese will needs slaves and these British soldiers are their slaves. Some are taken and tortured and put on the line but most of the small groups of men with Eric are kept for other duties at camp. When Eric Lomac and his comrades decide to build a radio with thoughts of escape but mainly for the purpose to have contact from the outside world the Japanese discover their radio and beat Eric to near death. Later Japanese officers and a young Nagase (Tanroh Ishida), the translator, take Eric away and subject him through weeks of private torture to get him to speak of their plan, a torture so horrifying that he has never spoken to anyone about it for all his years.

Eric and the other veterans could not love, they could not sleep, they basically could not live, scarred from the memories of their past during the war with the Imperial Japanese Army. Eric finds out that Nagase (Hiroyuki Sanada) still lives beyond the war and spends his life giving tours of the war museum that once housed the tortured British soldiers during war which included Eric and a room that he will never forget for as long as he lives. When Eric travels to take his revenge upon an older Nagase he is soon faced with decisions. Did these British soldiers die or were they murdered? Was this war a tragedy or a crime? What happened in that dark room that Eric was taken into? Lies or truth either way any man that served during that time in 1942 was still at war until their death. Is the word sorry enough to remove that dagger from ones heart? If anyone of these men could they would never live that time in their lives over but could Eric stop the hate and forgive and would he ever let Patti in to that room with him that he could never speak of?

The film unfolds like a well written book on the big screen. Brilliantly directed with some spectacular cinematography the story is absolutely mesmerizing and powerfully written that it keeps your attention from beginning to end. Although I must admit in the first twenty minutes or so I thought this film was turning into a romantic love story rather than that of a war that robbed the lives of so many dedicated young men. Either way from the score in this film that takes us through the journey of a man’s inner struggles to the acting by leads Firth and Kidman along with Irvine this story is an important part of history that is truly worth getting to know if you don’t already. Firth dives heads first into this role although I would have liked a touch more depth he does a good job of emitting his fears within the story but it is Kidman that proves why she can bring a character to life whether a lead or support she shines on the screen. Irvine is definitely well casted as the young Eric and does the role justice. I would have enjoyed seeing a bit more relationship on screen between the two best friends Irvine’s character and that of Reid who I think gets a bit disregarded in the story but overall all the characters help to make this a must see film if not on the big screen than at least on DVD. The beginning of the story may take you some time to relate to but once it gets involved in the moments of war it is then that the film takes a turn for the better. Written and appreciated for its story with two and half paws out of four, I’m Jon Patch.