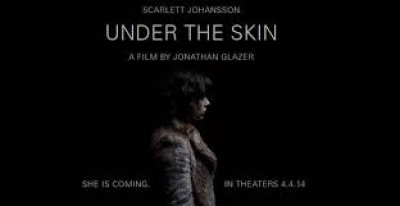 A motorcyclist pulls over on the side of a road walks into the darkness and pulls a girl’s body from the shrubs.  Next we witness a full white screen with one woman (Scarlett Johansson) pulling the clothes off of the girl’s body and placing them on herself.  Later throughout the entire film this woman who happens to be an alien is picking up male strangers with no attachment to friends or family, stripping them naked where they soon disappear into the depths of darkness.  Once covered in this blood like darkness eventually their skin is stripped from their body to be used by this female alien.  Interesting enough when she meets a disfigured male one evening she decides to spare him from death until later a motorcyclist cleans up her mistake.  It not long after this alien has the skin needed to fit into the human world does she start to develop feelings, the want to try living a human lifestyle with pleasures of television, music, vanity, the attempt to eat food and have sex neither of which are fitting to her species.  When one afternoon she is walking in the woods and is surprised by a male hiker she herself soon becomes the prey to his predator and life is forever diminished for her on earth.
The film is one of the strangest pictures I’ve witnessed in some time.  Grant it the film has a certain artsy technique to it that some people may appreciate but for most of the theater goers out there this film will fall flat.  The music is eerie like that out of an old horror film such as “The Blob” and the actor’s speech seems to get lost quite a bit in translation.  It is extremely slow and a bit boring with not a lot to keep your interest other than the fact of wondering what the heck you’re watching.  Some may like the nudity involved which keeps the story realistic but that is surely not a good reason to want to see this some call masterpiece some call horrible film.  I call it don’t waste your time personally.  I will say that is does have its originality, pretty cool camera angles and intriguing moments but overall not for me.  At least there was a dog in this picture but of course it did not have a happy ending let alone the family that owned it.  Written and forgotten with one paw out of four by Jon Patch.

More in this category: « Draft Day Heaven is for Real »
back to top

We have 290 guests and no members online