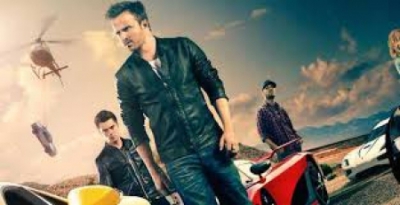 Tobey Marshall (Aaron Paul) lives in Mt. Kisco, New York and runs a garage called Marshall Motors.  His friends who happen to be his mechanics are Benny (Scott Mescudi) also known as “Maverick” for he happens to be the groups eyes in the sky when they race the streets, Finn (Rami Malek) the comedian of the group that likes to bare all, Joe Peck (Ramon Rodriguez) the level headed one and Little Pete (Harrison Gilbertson) who happens to be like a little brother to Tobey.  Apparently Tobey had a thing at one time with Pete’s sister Anita (Dakota Johnson) who now lives in the big city with Tobey’s rival Dino Brewster (Dominic Cooper) wealthy, spoiled and immature to say the least.
Well Tobey needs to get money to keep his business open and decides to take an offer from Dino against his liking of course to be rebuild a Ford Mustang that happens to be worth millions.  In return for the work on the car Tobey and his friends will make about half a million which will help save his garage.    Once finished and being showed off to the racing world Tobey meets Julia Maddon (Imogen Poots) and an instant love hate relationship began.  Little did Tobey know what he was getting into when he decided to race Dino for all or nothing of the Mustangs value because Pete joined the race as well and due to Dino’s greed to win Pete never got to finish the race and Tobey went to jail for two years.  A free man he discovers his garage has been foreclosed, he has no money, Anita thinks he is guilty for what happened to Pete and all Tobey wants is to get back in the race, the Da Leon race, which would make him a lot of money and revenge on Dino.
Tobey needs a car and thanks to Julia he has one to race, the Ford Mustang but she becomes part of the picture.  Traveling to Detroit to assemble his friends again the group goes to pick up Finn saving him from his corporate boring job.  Once the gang is all together it is now a cross country drive to California so Tobey can enter the biggest street race run by the Monarch (Michael Keaton).  Along the way sparks fly both on the streets in some of the wildest car chases and crashes on the screen and in the car as both Tobey and Julia begin to discover quite a bit more about each other on their journey across country.
In the end, the race is on and Tobey is not only looking to prove his innocence for a crime he did not commit but is also looking to make money to save his business and if falling in love happens then that just adds more value to the win.  Another 178 days later life goes on and so does some very familiar faces.
The film has elements of “Smokey and the Bandit”, “Fast and the Furious” amongst many other racing films.  The direction is well done keeping the audience entertained for the most part with a number of races throughout the streets of the city.  The writing is sufficient but at times I thought it lacked some imagination, intensity or for the most part a little levity for some of the characters, which by the way were not developed enough in order for the audience to get truly invested in them.  The 3D is great, the crashes and special effects and stunts phenomenal as is the score but overall even though I enjoyed this film It felt a bit like been there done that but just not as good as before.
Paul does a nice job as the lead but sad to say he just doesn’t stand out enough.  Poots has more appeal as his side-kick in the story during their journey from east to west.  Cooper plays a good villain and Rodriguez adds support along with Gilbertson who happens to give the story its plot no matter how weak it can be but it is Mescudi and Malek that seemed to pump adrenaline into the story.  On a side note nice to see Johnson in this film since I happen to be great friends with her Grandmother, TIppi Hedren, a person I hold near and dear to my heart.  Also Dakota will be starring in the new film “50 Shades of Grey” coming out in the near future.  Keaton is not a huge part of the film but during the times he is on camera he plays it well.  Definitely worth seeing especially if you’re a die-hard car fan but overall I would not make it my top priority when trying to decide one film from another.  Written and enjoyed with two paws out of four by Jon Patch.

More in this category: « Mr. Peabody & Sherman Captain America: The Winter Soldier »
back to top