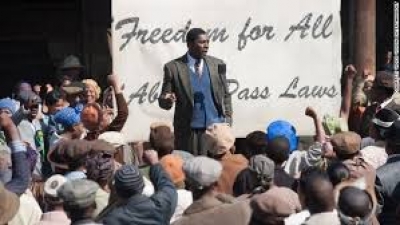 
The film takes us on a journey of Nelson Mandela from his days as a boy to his coming to age as a man.  In 1942 he has grown into an intelligent lawyer representing the black community in the court of law.  Of course many of the white community that battled in the courts against him were not too thrilled to be addressing a black man.  When a young black man is taken by three white police officers in jail, beaten and left for dead and the white courts decided to do nothing about it Mandela (Idris Elba) decided otherwise.
He marries for the first time and bares children with her but after spending more time away then at home and later cheats on her she leaves and Mandela continues his movement and speeches for freedom for all.  After spending time in jail then out, Mandela meets social worker Winnie Madikizela (Naomie Harris) at a bus stop and offers her a ride home.  Sometime later he and Winnie marry as he continues his movement for freedom of which Winnie is more understanding than his previous wife.
Sharpeville March 1960, officers offer a final warning to protestors and soon thereafter hundreds of Africans are killed.  Mandela decides to participate in the South African ANC training camps learning how to shoot and manufacture bombs with several of his close allies.  Not too long after the government is searching for Mandela to bring him to justice but he has gone into hiding.  In a fight for freedom Mandela has now led the ANC to violence.  In 1963, at the Palace of Justice in Pretoria Mandela and his men are sentenced to life in prison for sabotage and in June of 1964 they are sent to Robben Island where they will spend the rest of their lives under the watchful eyes of Colonel Badenhorst (David Butler).  During Mandela’s time there Winnie has been arrested several times as she continues his fight for freedom extending the violence towards the white government.
While in prison Mandela has lost family members to death, missed the childhood of his daughters and learned of the war and violence that has continued for so many years in South Africa.  In September 1970 Winnie is finally released from solitary confinement after a year and returns once again to her children.  June of 1976 in Soweto, riots are breaking out and deaths are still occurring in the streets, Mandela has greyed tremendously and his oldest daughter has not joined the movement under the watchful eyes of her mother Winnie.
In March 1982 after eighteen years on Robben Island Mandela and his men are moved to a Cape Town prison to be held under more sanitary conditions but it’s not without the authorities keeping a close eye and ear on the men’s actions and conversations.  In February 1985 Mandela’s daughter is giving speeches as the UDF unites while at this time government officials are in talks with Mandela to offer him freedom and his men in return for his efforts to stop the violence.  Turning seventy Mandela insists to them that when blacks come to power there will be no revenge but only time would tell if Mandela speaks the truth.  In February of 1990 Mandela is given his freedom but the tensions of his people are not his only fight.  There are issues built between he and Winnie and when he addresses the South African population on a television broadcast he actually does confirm that the only way to stop this violence is with peace and forgiveness, no weapons just peace.  To end war but to begin to vote and in April of 1994 the ANC announces a victory and that long walk to freedom for Mandela and his country has finally become a reality.  It is his final words in the film that ring true today, no one is born to hate based on color of the skin it is learned but throughout it all they can be taught to love.  These are words to live by as we need to forgive and move forward in love in order to have a better tomorrow for all race, religion and orientation.
Chadwick does a beautiful work of art in directing this film on the life of Mandela and at over two hours the times passes pretty quickly.  Superb writing, great cinematography, costumes and score along with very realistic images of years past make this film worth seeing.  I’m sure that statue named Oscar will be reflecting brightly on this film for 2013.  Especially in regards to Elba who is superb as the character Mandela.  With a great cast of supporting characters and walk down the halls of history this film is surely worth the education to purchase a ticket at the box office.  You may find out that Mandela was a complex character in life not loved at first by all but in the end full with the wisdom and the voice for peace, freedom and equal rights for all mankind.  Written and thoroughly enjoyed especially for his final words in the film with three paws out of four by Jon Patch.

More in this category: « August: Osage County Paranormal Activity: The Marked Ones »
back to top