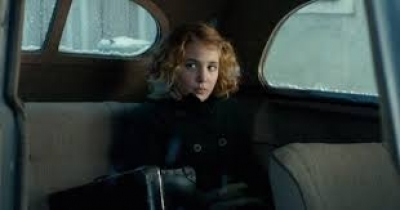 No one lives forever!  A statement expressed by the narrator (voice of Roger Allam) of this story.  Ironically the narrator happens to be death!
As a mother (Heike Makatsch) and her two children, Liesel (Sophie Nelisse) and her younger brother  (Julian Lehmann) take a train ride to meet with the children’s new parents Hans (Geoffrey Rush) and Rosa (Emily Watson) the young boy dies and is quickly buried on the side of the tracks.   The new parents, Hans and Rosa thought they would get two children and two allowances but of course things changed, not pleasing Rosa, even more so when Liesel takes a liking to Hans and not Rosa.
The neighborhood boy, Rudy (Nico Liersch) has decided to take a liking to Liesel and escort her to her first day of school but once there the other students soon find out that Liesel is absolutely uneducated and unable to read.  She carries with her a book that she discovered when the gravediggers buried her brother but not being able to read she knows not what it says.  It’s November 1938 and the Germans have attacked the Jews, a young man on the mercy of his mother’s wishes asked him to flee for his safety upon which the young man, Max (Ben Schnetzer), ends up at the home of Hans and Rosa.  He soon bonds with Liesel while sleeping in what should have been her brother’s bed.  When the Germans get closer to the villages, Hans and Rosa decide to hide Max in the basement, whereas Liesel has used the walls as a dictionary to study words as she tries to learn to read.
April 1939, the day of the Fuhrer’s birthday and all the Germans are in celebration, burning books in the streets as they hail Hitler.  When Liesel hangs out after everyone leaves she grabs a book from the fire but is soon seen doing so by Isla Hermann (Barbara Auer) the wife of Buergmeister Hermann (Rainer Bock) friend of the Fuhrer, as rumor has it.  Secrets start to add up as Liesel keeps her word to not speak a sound of Max, let alone the fact that she took a book from the fires.  When Rosa asks Liesel to deliver laundry one day she finds herself in the home of the Hermann’s and soon in the library where Isla decides to share her knowledge of books with the young girl.  Day after day Liesel would return to read until one day when Buergmeister discovered her in their home he band her from returning but unwelcomed Liesel still came back to borrow books but rather than a door she entered through an opened window.
It’s December 1941 and Hans and his family celebrate Christmas, Max’s first ever, they have snow fights in the basement and build a small snowman, as they sing carols while Hans plays his accordion.  Max hands Liesel a gift – it is his book, a book of blank pages.  He expresses that words are life and Liesel has truly learned in time how to live them.  The season grew cold, the basement damp and Max took very ill.  The Germans are checking basements for hidden Jews and if caught life would end for the entire family including Liesel.  When Max regains his health he leaves so as to protect the family that has harbored him for years.
November 1942, the bombs are getting closer and the war is getting stronger and in the close distance there are no sirens but rather death that walks the rubble streets.  A whisper in the night, “good night your majesty” as death moves even closer.  Humans are sometimes ugly or beautiful; it is hard to comprehend how some can be both.  Two years later in the year 1945 U.S. troops occupy Germany and we find that it is true no one lives forever but some may live a very long time and in some cases death can truly be humbled by humans.
The film is very well directed and smartly written and plays on the big screen as if you are ready a book allowing your imagination to kick in at times and wonder what the true meaning of war is and why it has to exist in life but without it I guess there would be less death.  Wonderful cinematography and a great score will truly keep you invested in this story of a young girl and the people she meets, the situations she encounters, the books she reads and the encounter she meets up with in death.  It was nice to step away from all the special effects in most films and watch a story unfold on the big screen that contains depth and meaning.
Great voice work by Allam.  Rush is spectacular and portrays himself as the father every child wishes they had to grow up with.  Watson is a tough character but you get to see both sides of her role as she soon discovers that there is more to life when you’re surrounded by family and love.  Liersch was a nice support to Nelisse but it is her character that carries this film the entire way leaving the audience no alternative other than to fall in love with this young girl caught in the ugliness of war.  There are a number of supporting characters that help make this story worth the time in the theater.  It will probably not be a huge box office success by far but hopefully you’ll appreciate the story idea enough to watch it on DVD in the future.  Written and appreciated with two and half paws out of four by Jon Patch.

More in this category: « The Hobbit: The Desolation of Smaug American Hustle »
back to top