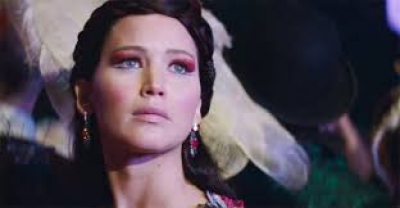 
As the story of Katniss Everdeen (Jennifer Lawrence) and fellow 74th season Hunger Games winner and known to the world has new lover, Peeta Mellark (Josh Hutcherson) unfolds we find the newly crowned winners getting ready to set out on a victory tour throughout the 12 districts.  Of course the world still sees Katniss and Peeta as a young couple in love but as for President Snow (Donald Sutherland) he sees so much more, a threat to society.
In the opening moments of the story Katniss is out hunting with her real love interest Gale Hawthorne (Liam Hemsworth).  Surrounded by turkey’s Katniss takes a shot but in her mind it is not the turkey she kills but rather the horror she encountered during the games as allies and foes were gruesomely killed around her.  Her fears are real, her love for Gale is real and her friendship for Peeta is real yet for Peeta it is much more.  As for President Snow it is even more important to him that his people see Katniss and Peeta as real lovers and he will stop at nothing to prove this even as much as to kill her family, her mother (Paula Malcomson) and her young sister Primrose (Willow Shields) if Katniss does not fulfill her end of the agreement by proving her love for Peeta to everyone.  So for 12 days and 12 districts Katniss and Peeta set out on a lie, giving speeches for fallen competitors and becoming mentors for new future players in the games.
Katniss and Peeta are still surrounded by their original staff and colleagues, Haymitch Abernathy (Woody Harrelson) their coach, Effie Trinket (Elizabeth Banks) the oddly dressed publicist to them and the games,  Cinna (Lenny Kravitz) their designer and yet of course the television host Caesar Flickerman (Stanley Tucci).  President Snow has brought on a new member to his team, the game maker, Plutarch Heavensbee (Philip Seymour Hoffman) to create a new event for the 75th Hunger Games, The Quarter Quell.  Things don’t quite seem as they appear in the Capitol suddenly and President Snow fears a rebellion with Katniss in the crosshairs as a potential threat.
The games have taken a new turn as President Snow addresses the Capitol expressing the fact that for the 75th Hunger Games past winners both male and female will be chosen to compete and as for district 12 there was only one female winner, Katniss.  Once again Katniss and Peeta have been thrown together to compete for their lives in the tropics and sands of the new games competing against a group of past champions.  24 players will compete but this time there will be only 1 winner, not 2 and the players are of varied ages, health and blood.  Once in the games Katniss and Peeta are faced with apes, lightning, storms, birds, sacrifice, fear, trust and survival along with an educated and cut-throat group of players.  In the beginning some are allies, most are not, some have motives, some have no clue but overall there are broken promises all leading up to the ultimate rebellion and an ending that leaves this story wide open for chapter 3.
The film is beautifully directed and written accentuated with a brilliant score and bed of songs sure to make this soundtrack stand out to the audience.  There is truly much more dialogue and story line to this chapter and even though there are the games they are not the main focus to this continuing story surrounding the life of Katniss Everdeen.  Overall I cannot say anything negative about this film since it especially in IMAX is absolutely breath-taking and superbly projected for the much awaiting audience eager to see what happens next in the Capitol.
Lawrence is just plain phenomenal in this role and has even upped her acting game even further making the audience feel every ounce of her inner emotions.  Hutcherson is the perfect match to her talents and abilities and brings even more perfection to them on screen together.  Hemsworth has his moments but is far from a major character in this film.  Harrelson I thought missed the mark once or twice but only in a very small way so otherwise he is always interesting to watch.  Sutherland is brilliant as evil and Banks is wonderful from head to toe as she walks on and off screen like a cartoon character.  Kravitz has a small supporting role but his future is uncertain moving forward but not so for Tucci who like a circus leader controls the audience every time he speaks.  Overall this film is brilliant and is sure to satisfy the box office once again even though I felt there could have been a bit more game time albeit this review is written with three and half paws out of four by Jon Patch.
Read 2991 times
Published in Movie Reviews
Tagged under

More in this category: « Delivery Man Danger in the Manager »
back to top

We have 901 guests and no members online