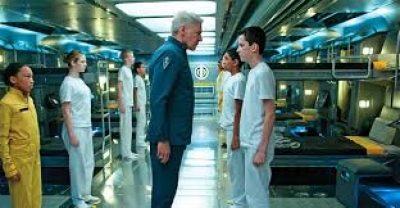 
In the case of defeating your enemy they say you must first know him and then love him.  Fifty years ago Earth was attacked by aliens known as Formics and humans have been preparing for yet another attack.  Colonel Graff (Harrison Ford) and Major Gwen Anderson (Viola Davis) have discovered a new recruit on Earth that they believe can someday become a leader, Ender Wiggins (Asa Butterfield), a quiet and reserved young man with the intelligence of someday becoming a leader such as Caesar.  When tested in several trials he showed more promise than any other young recruit including his beloved sister Valentine (Abigail Breslin) and his out of control brother Peter (Jimmy ‘Jax’ Pinchak), both who happened to fail the opportunity to become a cadet.
Ender once accepted was flown with several other young males and females to a station in space where they would learn the skills of a cadet and one day fight to protect humanity.  Being such a skilled student Ender has not only become a target by his commanders to perform well but in the beginning a target by his fellow students.  He begins to befriend several others that truly see his capabilities as he attaches himself to fellow cadets Bean (Aramis Knight) and Alai (Suraj Partha) but seems to butt heads with Bernard (Conor Carroll).
The teams are sent through constant battle drills with the thought of one past leader to keep in mind as their mentor, Mazer Rackham (Ben Kingsley), a brave man that flew his jet into a queen Formic ship bringing the other enemy ships to oblivion.  It’s not too soon after Ender’s arrival that he is transferred to the Salamander team led by Bonzo Madrid (Moises Arias) a small yet vindictive team leader that wants nothing more than for Ender to fail.  Whether it is during war games, boot camp practice with the only girl on the team, Petra Arkanian (Hailee Steinfeld), lunch or in the shower, Bonzo is quick to try and keep Ender in line.  The bottom of the line that is!  But Ender does not falter and once again proves his dedication and skills eventually leading to the Dragon army, his own assembled team.
It is not until this team of so called misfits assembles does Ender begin to realize why he is truly on board with Graff and the military.  His dream has now become a reality but when faced with the truth of his dream he soon discovers it is not the reality he expected.  Like a queen ant that controls her army, kill her and the whole colony dies, kill all the queens and the entire species dies.  Or does it?  Does one want to be remembered as a killer or victor in life?  It all depends on the end result and making amends for one’s wrong, overall keeping your initial promise.
The film is absolutely breath-taking visually with so many great special effects and zero gravity scenes that make it worth watching even though it’s full on story but low on action.  Hood really does a brilliant job directing and writing this film, keeping the audience intrigued from beginning to end, even though I thought the script had one or two holes.  Then again maybe I blinked once or twice!  It sometimes had a feel like “Hunger Games” or “Twilight” to it as you totally get invested in the story and the young actors.  Even besides the superb cinematography, the dramatic score is fantastic and perfect to what is going on in this story.
As for the actors Butterfield, an unknown to me, really is wonderful and takes this lead role as well as any seasoned actor.  Speaking of seasoned, Ford of course does not disappoint at all as he leads Wiggins through the course of boot camp.  Davis and Kingsley are not huge roles but rather great supports to the young actors and both do justice to their characters.  Steinfeld, Knight, Partha, Carroll, Breslin and Pinchak are all perfect and really bring a sense of team work to this story.  Sergeant Dap (Nonso Anozie) who I have not mentioned earlier definitely deserves a high five as the aggressive in your face drill sergeant on the ship.  Arias first gets a chuckle from the audience because of his size but soon proves that big things can come in small packages.  Personally I am hooked on this film in many ways and would highly recommend it as a must see at the theater since all this space deserves a big screen.  I’m surprised it was not in 3D.  Written and truly enjoyed with three paws out of four by Jon Patch.
Read 2321 times
Published in Movie Reviews
Tagged under

More in this category: « Last Vegas One Direction: Reaching for the Stars »
back to top

We have 340 guests and no members online