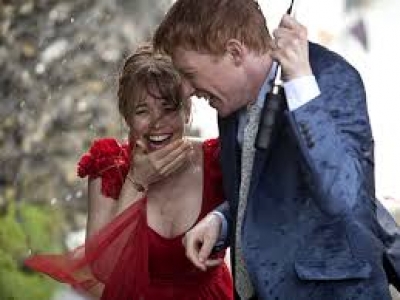 
At the age of 21, red haired, pasty white, Tim (Domhnall Gleeson) who lives with his parents (Bill Nighy), (Lindsay Duncan), his sister Kit Kat (Lydia Wilson) and forgetful Uncle (Richard Cordery) in Cornwall has been told a secret.  His father confided in him that he like all the other men in their family have a gift.  The power to travel through time, not being able to change history but rather certain elements of his own life which of course affect the people around him as well, Tim just needs to get into a dark place like a closet, clinch his fists and think of where and when he wants to be.  Now you would think this would be a blessing but for some not so much.
Tim decides to head to London knowing of his powers to find a girlfriend and become a lawyer.  He moves in with his father’s old pal Harry (Tom Hollander) an aspiring playwright and a bit of an odd character to say the least.  At the law firm he becomes friends with Rory (Joshua McGuire) but still keeps in touch with his other friend Jay (Will Merrick) who happens to have a bit of an interest in Kit Kat that is until she gets involved with Jimmy (Tom Hughes).  Remember though time does change everything whether time in the future or time in the past.
One night out in London, Tim meets Mary (Rachel McAdams) while she is out with her friend Joanna (Vanessa Kirby) the girl with the pretty prostitute looks, before he knows it he falls in love with Mary.  The only problem is that when he traveled back in time to try to win her over he ends up making matters worse until finally he wins her heart.  Time goes by and it’s not until Tim bumps into an old interest, Charlotte (Margot Robbie), does he realize it’s time to ask Mary to marry him.  In time they announce not only the engagement to the family but also that Mary is pregnant and it certainly wasn’t Immaculate Conception by no means especially when you can travel back in time for more.  Tim and Mary get married; they start a family of their own, realizing then what is truly important in life.  Years pass by, lessons are learned and loss is experienced that time travel cannot cure.  His father once told him to experience parts of life twice so that you can actually see the enjoyment of living the second time around.  For Tim sometimes some days he only wanted to live once since the unknown of everyday is the best of life to enjoy.
Curtis once again does a great job of writing and directing a wonderful film about love, family and the elements of life that truly matter.  I loved his film “Love Actually” and within this story there are many similarities dealing with the everyday aspects that life throws at you like the search for love or understanding about life and the people within your own story.  Curtis deals with the premise of time travel but he doesn’t let it overwhelm the real meaning behind his story but in some circumstances uses it to add a bit of humor.  Some nice cinematography, mixed in with a delightful score and the story takes you on an adventure in life that will in some aspects possibly reflect your own.  I mean if you had the chance to change your fate maybe in just the slightest way would you take advantage of the opportunity?
I was only familiar with McAdams and Nighy and am a fan of both of them but it is McAdams that I always seem to enjoy most in her roles out of most of the Hollywood leading ladies.  Nighy is always spot on and once again does not disappoint.  I am not familiar with Gleeson but he surely does a convincing job as the main character in this story even though at times he comes across a bit nerdy and awkward which of course is his character.  Hollander adds some interesting moments as does Wilson that helps to propel the story forward with Cordery doing a nice comical relief moment from time to time.  The rest of the cast even though to me unknown all do a superb job in making this film worth a box office ticket especially if you out on a date headed to the theater.  Written and enjoyed especially for the writing and developed cast of characters with two and half paws out of four by Jon Patch.
Read 2440 times
Published in Movie Reviews
Tagged under

More in this category: « Bad Grandpa Free Birds »
back to top

We have 353 guests and no members online