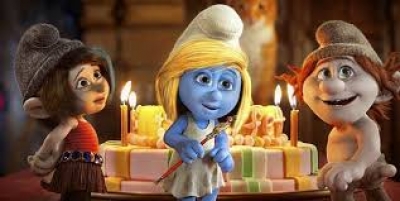 
As the story unfolds we learn the Smurfology of the one and only female Smurf, Smurfette (voice of Katy Perry) and how she was the creation of Gargamel (Hank Azaria) born white and evil but turned blue and good by Papa Smurf (Jonathan Winters).  It happens to be Smurfette’s birthday and like every year she feels a bit depressed and a bit lonely, little does she know that the other Smurfs in the village are planning a surprise party for her.  She continues to have nightmares about the time she was evil and out to destroy the Smurfs but since Papa cast a Smurf spell on her making her blue she has become a true member of the Smurf family.
Back in Paris, Gargamel is a hit on stage as he hosts his own illusions show called Gargamania along with his cat Azreal (Mr. Krinkle)and his newest creations that he keeps alive with essence, Vexy (voice of Christina Ricci) and Hackus (voice of J.B. Smoove) known as Naughty’s.  Gargamel has a plan which is to enter a portal once again, return to the Smurf village, capture Smurfette and get the secret spell that creates Smurfs, this way he can create an army of Naughty’s turn them blue and take over the entire Smurf population ultimately ruling the world by the way of Smurf-a-geddon..
When Smurfette does get captured and taken to Paris, Papa Smurf, Grouchy Smurf (voice of George Lopez), Clumsy Smurf (voice of Anton Yelchin) and Vanity Smurf (voice of John Oliver) set off to find Patrick (Neil Patrick Harris) and Grace (Jayma Mays) to help them find Smurfette and help to bring her home before it’s too late.  Little did Papa Smurf and the group know along with Patrick and Grace would come the help of their son Blue (Jacob Tremblay) and Patrick’s stepfather Victor (Brendan Gleeson).  Along the way though things just don’t quite go as planned, Victor becomes a duck, Smurfette becomes family to Vexy and Hackus jeopardizing the entire Smurf colony and Gargamel becomes even stronger, still quite the idiot but stronger.
In the end we learn that love is not conditional and family will always be family no matter if born into it or welcomed in.  It doesn’t matter where you come from but rather who you choose to be.  Smurfette has some major decisions to make that will not only affect the Smurfs but the lives of Vexy and Hackus as well.
The film has great animation and still incorporates Narrator Smurf (voice of Tom Kane) who helps to put some of the story into perspective for the audience.  The writers really did a nice job with the dialogue adding a few moments of whimsical adult humor and references to some other films like Star Wars but overall in the end the story plays more to young children than the adult audience unlike many other animated films tend to do that play to all demographics, young and old.  Either way the film is still quite delightful filled with many visual delights of Paris, a fun score and soundtrack along with some brilliant animation, all making this film worth the ticket price for the whole family.  I must say besides the Smurfs themselves, Azreal the cat is one of my favorites as is Harris who once again pulls off a stellar performance and Azaria who really brings the idiotic evil side to the story as the true villain out to conquer the Smurfs.  Once again the Smurfs are full of surprises and fireworks sure to make this second addition to the little blue creatures not a huge domestic box office but one that should perform well enough to strongly contemplate a Smurfs 3!  Written and enjoyed with two and half paws out of four by Jon Patch.
Read 3010 times
Published in Movie Reviews
Tagged under

More in this category: « The Wolverine 2 Guns »
back to top