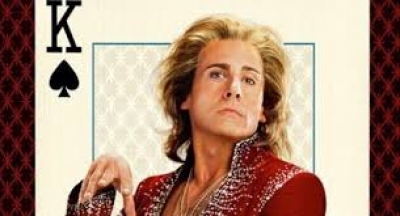 
In 1982, a young boy named Burt (Mason Cook) had no friends, a matter of fact if it wasn’t for the bully’s in his life than no one would even talk with him.  That one special day on his birthday his mother gave him a present, well more so left it for him at home, a magic set by Rance Holloway (Alan Arkin) and from that moment on young Burt knew his destiny.  A destiny that already got him one friend at school, Anton (Luke Vanek), who later became his best friend and years later his partner on stage at Bally’s in Las Vegas on the stage headlining ‘The Incredible Burt and Anton Show’.  I happened to enjoy the young kid’s story a bit more so than that of their adult version years later and would probably have enjoyed the buildup to Vegas a bit more!
For approximately ten years Burt Wonderstone (Steve Carell) and Anton Marvelton (Steve Buscemi) worked side by side as best friends and partners on the Vegas strip.  One day when a new up and coming act starring Steve Gray (Jim Carrey) came from the streets to cable television Burt and Anton knew they had to up their game.  Their pretty girl assistants, all named Nicole, were disappearing and so was their audience.  The owner of the casino Doug Munny (James Gandolfini) knew that Burt needed to freshen up his act.  Hence the idea to survive one week outside the hotel and casino in a glass box lifted high above the ground for all their fans to marvel.  Things did not go quite as planned and suddenly the act was over and so was the partnership and friendship between Burt and Anton.  You’re only as good as your last act seems to ring true on the big stage especially in the world of magic.
Nowhere to go Burt reaches out to his assistant Nicole, real name Jane (Olivia Wilde) for a roof over his, his birds and rabbits heads but that didn’t work out to well either.  No money, no act, no friends, Burt tries his hand working at different local smaller venues, much smaller, but along the way he finally finds his humility and his world and the people in it all finally come around  along with his old boss who offers Burt a gig performing at his son’s birthday party.  With the knowledge from Rance, the support from Jane and the competition from Steve and a tiny little puppy, Burt has found his passion once again.  In the final contest for a once again headlining act in Vegas Steve drills it through his head that in the world of magic the best act wins in the end and always gets the girl but hopefully this time the winner doesn’t put the audience to sleep at least for all the wrong reasons.
The film is very well directed with a great story and it has several hysterical moments but not as many as I would have thought.  A matter of fact it seemed to fall a bit more on the side of drama than comedy and thankfully so I hope, no animals were truly hurt in the making of this illusion.  Birds, bunnies, puppies, butterflies and the references to reasons for not working with big cats on stage are all featured throughout the story but it is the magic acts themselves although a bit lame that are the main attractions and the people performing them, some traditional and some just down right gross and pathetic.  One thing though there is quite the product placement throughout the story from ‘Bounty’ to ‘Big Lots’ and not to forget ‘Bally’s’ the big screen definitely features some ‘Trojan’ moments.  Overall though the film will entertain due to some superb writing but it falls a bit short for me otherwise except for the actors who all do their roles justice although not as hysterical as it could have been.
Carell is spot on once again and does a nice job delivering his character as does Buscemi who tends to steal the light from Carell when they’re in the same scene.  Wilde proves that she can pull of a comical moment but even if not she still looks good on the big screen.  Ok now I sound like Wonderstone but all that aside she falls a bit flat not because of her but more so because of her character which never seems to step up to the plate for anything other than a support to the main characters Carell and Buscemi.  Even big name Carrey took a bit of a backseat in this film bringing a more idiotic and grotesque aspect to his role than whimsical and funny.  Gandolfini is not quite the mob boss here but fits in well as the casino owner out for the next best thing.  Even Arkin straight from his role in “Argo” once again mesmerizes in this film as well.  There are a number of other appearances, Jay Mohr, Erin Burnett, Brad Garrett and David Copperfield to mention a few but overall a good story that occasionally brings out some laughter along the way.  Written with a slight lack of magic and two paws out of four by Jon Patch.
Read 3006 times
Published in Movie Reviews
Tagged under

More in this category: « The Call Stoker »
back to top