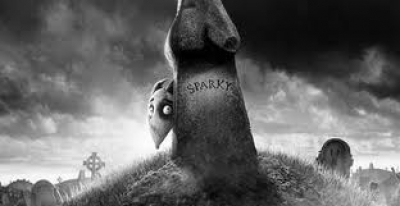 
Victor Frankenstein (voice of Charlie Tahan) lives in a modest home, in the suburbs of New Holland with his parents (voices of Catherine O’Hara and Martin Short) and his best friend, man’s best friend, his dog Sparky.  Victor did not have many friends rather he spent his life in the attic working on monster films that starred Sparky.
Next door to the Frankenstein’s lives Elsa Van Helsing (voice of Winona Ryder) along with her Poodle, a backyard friend to Sparky.  Since her parents are out of town, Uncle Bob (Robert Capron) the Mayor of New Holland has been keeping a watchful eye on her and the property, especially his flower garden.
Mr. Frankenstein suggests to his son Victor to get out of the house and possibly join a school sports team, like baseball.  Well its Victors first game he steps up to the plate, Sparky is barking him on, smack it’s a home run out of the park and the ball bounces on to the street.  Sparky out runs the kid’s grabs the ball and then it happens, the driver of the car never saw Sparky until it was too late.
At New Holland Elementary we get introduced to an array of characters one being the evil looking but quite nice science teacher Mr. Rzykruski (voice of Martin Landau) who is teaching Victor, Edgar ‘E’ Gore (voice of Atticus Shaffer), Toshiaki (voice of James Hiroyuki Liao) and the other kids about lightning and electricity, demonstrating on a dead frog how electricity to the muscles of a dead body will make them still react to the voltage.  Oh what an idea for Victor, after school he runs to the pet cemetery digs up Sparky and during a fierce storm resurrects his dog.  Ok so he looks a bit different and has a few flaws but he still loves Victor and Victor loves him.
Even though Victor tries to keep his miracle a secret soon the town catches on and when the kids get involved to steal his idea for the school science fair, everything imaginable goes wrong.  Elsa’s cat, Mr. Whiskers has suddenly gone batty and empty graves become noticed at the pet cemetery.  Soon what was once kid’s pets, along with some other animal like creatures are brought back from the dead, although this time science has gone wrong and the townspeople are left to run for their lives.  Albeit in the end everything goes up in flames but it took one misunderstood canine to save the day proving that dog is truly man’s best friend, in this case dead or alive!
Typical Tim Burton, dark, strange, a good story even though it follows the classic tail, I mean tale, containing a lot of bizarre yet amusing twists and turns.  The 3D is nicely appreciated along with the many creatures in this interesting yet not so younger child friendly story about a dog brought back from the dead because of the love from a child.  Oh what will forever be laced within the minds of the young children who lose their own beloved pet after seeing this film?  It does contain an appropriate score to accompany some strange yet phenomenal animation; Burton directs the film well filled with a few holes yet bizarre effects like the scene in which the Frankenstein’s are watching actual humans on television.
Overall I enjoyed the film, the use of animal behaviorism, some of the characters, albeit mostly undeveloped, especially that of Edgar who happened to be my favorite but in the end I’d be a bit worried about the effects it could have on the very young at heart.  So parents be prepared to answer a lot of questions and comfort your little ones when they get a bit frightened from the subject matter.  Since I host a national animal show this is written with a slightly heavy heart for the use and depiction of some of the animals, with two and half paws out of four by Jon Patch.
Read 11548 times
Published in Movie Reviews
Tagged under

More in this category: « Looper Seven Psychopaths »
back to top

We have 573 guests and no members online