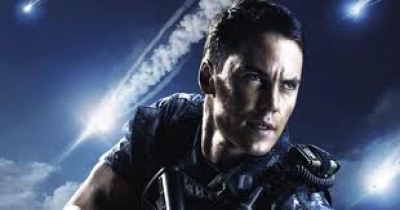 Back in 2005 we discovered another planet out there that could sustain life and through “The Beacon Project” we’ve decided to try and communicate with it, assuming it contains life. Officials believe that there are other planets like Earth and now they may have proof in their new find of what they call “Planet G”.

In a local bar on the island of Oahu, Hawaii, two brothers Alex Hopper (Taylor Kitsch) 26 years old that day, jobless and always in trouble is sharing a drink with his older brother Stone (Alexander Skarsgard). That is until a beautiful blonde, Sam (Brooklyn Decker), walks into the bar in search of a chicken burrito. Determined to meet her and hopefully make is birthday wish come true Alex sets out to have a conversation but things don’t quite go as planned. Next day Stone who happens to be a commander in the Navy informs Alex that he is going to straighten his life out and join the Navy. Is it really that simple! One rule is for him to stay away from the beautiful blonde who happens to be Admiral Shane’s (Liam Neeson) daughter. Well of course the bad boy turned naval officer did not listen and as the saying goes once a loser always a loser! Or is that so! Well it is when he plays a soccer game against the Japanese fleet, creating an eternal enemy, Captain Yugi Nagata (Tadanobu Asano) just from one kick to the face. The writers at this point have set up the character development as best they can albeit a weak story line with a few unlikely occurrences in the real world but hey this is a movie and if you’re in it for special effects and awesome scenes then it’s well worth it. Ignore the story but enjoy the ride!

Back at Pearl Harbor on the U.S.S. Missouri Admiral Shane is saluting our naval veterans before the navy sets out on the U.S.S. Ronald Reagan, U.S.S. Sampson and the U.S.S. John Paul Jones to partake in the RIMPAC Exercises. Alex’s days are numbered in the Navy due to reckless behavior so any thoughts of asking for Sam’s hand in marriage from the Admiral are far and in between. But things can change and this story once again like many before it makes a hero out of an idiot. At times the film seems to fit in as a promotional advertisement to join the Navy but it takes a darker yet deeper emotional twist when we get to visit Sam at her job as a physical therapist working with the soldiers that returned home without legs, arms and other war caused handicaps. She centers her attention on Lieutenant Colonel Mick Canales (Gregory D. Gadson) who returned home from war with no legs. What better exercise than to get out in the open air and hike up to Saddle Ridge Station but little did they know what they’d eventually find themselves in the middle of sometime later.

The Beacon Project has worked and five unidentified flying objects are headed towards earth, specifically Hawaii. Although when a satellite gets in the way of the alien communications ship thousands of lives end up lost in Hong Kong. Once again some pretty awesome like “Transformers” special effects in which one scene seemed reminiscent to “9/11”. Four ships crash into the Pacific Ocean and soon Earth is under full attack. In a battle to the end the aliens launch some type of rotating metal balls that spin like electrified barb wire taking out life and structures on the island and they have a reason for their targets. In the ocean the battle continues between the humans and the alien ships and lives and destroyers are lost in the process but two unlikely men find the courage to fight together and hopefully save the day. Have you ever seen an alien? Well you will here, first up close from the one the U.S.S. John Paul Jones fished out of the sea and later on when many others take over the satellite dishes on Saddle Ridge in hopes of communicating with their planet. Think “E.T.” phone home, although these guys in metal suits mean business and nothing is about to stand in their way, not even a Reese’s Pieces. Unless you’re unarmed and helpless than by chance they may pass you by when they scan you as a possible threat. These creatures have their weakness and leave it up to ‘Ordy’ who carries a picture of his pet on his phone to discover what one is.

Like moments from “Titanic” blended with “Independence Day” amongst several others the film uses many other ideas from other films to make this high octane 131 minute music video type film come alive. Not only due to the fact that an R&B crossover Pop star is utilized in the story, Petty Officer Cora ‘Weps’ Raikes (Rihanna), who the director uses in several scenes but the writers supplied little lines too, this film will attract a definite younger audience. Though there is global unrest going on due to this alien attack in Hawaii it seems hard to believe that no one else is in the fight to help save the day other than the Navy led by one American and one Japanese officer. How does one go from being a misfit to Captain of a ship? Only in the movies and besides the fact of some poor writing again I liked this film for many reasons but mostly due to the fact that the effects truly kicked some major butt. Only hours left, the last remaining ship, an old crew, a handicapped man and Cal (Hamish Linklater) fight to see if they can find the world another day with an old naval philosophy, the art of war.

The film like I said steals moments and ideas from other films at least I thought so but like everyone knows Hollywood is struggling for some original ideas. Maybe if they would look beyond their own walls they’d see that the world is full of them. Product placement is throughout the film, cliché moments as well but the best part was the acknowledgement to our war veterans and our wounded soldiers which was oddly placed but very much appreciated and deserved with honor for these outstanding men and women. Overall though like I mentioned earlier even though the story is a bit weak, not overly well acted and filled with a few holes and many unrealistic scenarios this film is pure entertainment and moves well from beginning to end.

As for the main actors Kitsch tried his best and pulls it off once he moves from speaking to action it’s just too bad they made him into such a loser role in the beginning rather than just centering the attention on the brother’s relationship. Skarsgard is a good actor, known for his role in “True Blood” along with several other movies but he is underutilized here. Maybe they should have switched roles and he should have been the loser and Kitsch the intelligent one! Speaking of underused, Neeson of whom I am a big fan gets very little screen time and would have been excellent if only he was the one to save the day. Maybe the budget was all used up for the special effects and not the actor’s pockets! Decker was good to look at of course but not the best choice since she seemed a bit awkward most of the time. Asano does a fine job along with many of the other supporting characters but thankfully when the writers decided to add Rihanna to the film, probably to attract her fans, it was well thought out to use her throughout the film and give her a small amount of lines. Good thinking since it kept her chances of being thrashed by critics to a minimum. Maybe! Albeit in the end I have to say nature was calling towards the last half hour for me yet I had no intention on missing any part of this high octane special effects thrill ride so I held it off until the credits but missed what happened after that. Oh well life will go on for yet another day. Even in Hawaii! Written and absolutely recommended for the CGI, photography and score with two paws out of four, it took a major hit due to the writing and a bit of the acting, I’m Jon Patch.

More in this category: « What To Expect When You're Expecting Men in Black III »
back to top

We have 456 guests and no members online