Re Mattei will join Jon and Talkin' Pets to discuss her new single, "Feels Like It's Gonna Rain" 12/8/18 at 630pm EST and give away copies of her CD 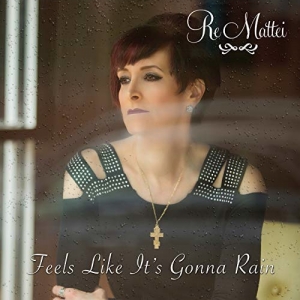 NASHVILLE, Tenn. - (October 16, 2018) – Berklee College of Music graduate and International touring, recording and performing artist, Re Mattei, has released the lyric video for her current single “Feels Like It’s Gonna Rain” which was written by Carrie Underwood, Don Poythress and Barry Dean and released exclusively on The Country Note on Monday Oct.15. Watch the emotional lyric video here

"Re Mattei's sultry and smooth vocals stand out beautifully against delicate piano and guitar,” stated The Country Note Creative Director; Janeen Megloranzo. “One can hear traces of Reba McEntire and Jennifer Nettles throughout the song, showing the songstress' prowess over her amazing instrument."

“Feels Like It’s Gonna Rain” is the second single off her current project and is steadily moving up the MusicRow Chart. Mattei recently returned from a New York media tour and exclusive performance for WFRY/Froggy 97 listeners at the 1000 Islands Winery in Watertown, NY.

“From the moment I heard this song I fell in love with it. I listened to it for six months before deciding to do it and every time I played it I would have tears in my eyes,” states Re Mattei. “I had no idea Carrie Underwood was one of the co-writers, but I am grateful that I have had the opportunity to sing it. I hope you fall in love with it as much as I did.”

“A powerful emotional single delivered by one country’s brightest new up and coming stars. It sure feels like Re will be showering us with hits for a long time to come." said KFAV/Warrenton Program Director; Mike Thomas.

The New Jersey native has toured globally entertaining crowds with her sultry, soulful voice and magnetic energy. Her passion for music bringing stories to life with her contemporary country sound.

About Re Mattei:
Re Mattei is a Berklee music scholar, global entertainer and guitar aficionado. She launched her successful music career as the lead guitar player for the all-female, Top 40 band, Uptown Girls. Redirecting her concentrations toward her own independent recordings. Re is poised to introduce her unique brand of musical talents as a songwriter, composer and instrumentalist. The "must-see" entertainer, has toured the world playing in Japan, Philippines, Singapore and Hawaii. Watch for the upcoming release of her new album--Believin’ Is Seein’ due in the Fall of 2018.
.
# # #
Read more...

Check out the latest newsletter from Mercy For Animals

David Frei is well-known to millions of television viewers as the longtime co-host of USA Network’s annual telecast of the popular Westminster Kennel Club Dog Show.

David has co-hosted the live Westminster coverage from New York’s Madison Square Garden since 1990. In connection with that role, he has made many appearances on The Today Show, Good Morning America, The Early Show, Ellen, The View, Martha Stewart, Charlie Rose, and many more. His adventures with the Westminster Best In Show winners have taken him many places, including the White House and for a ride on a float in the Macy’s Thanksgiving Day Parade. He has been director of communications for the Westminster Kennel Club since 2003.

David also has been co-host on NBC of The National Dog Show on Thanksgiving Day since its inception in 2002, a telecast seen by about 20 million viewers every year.

His new book, Angel On A Leash, about his work and observations in the world of therapy dogs and his life in dogs, was released in November 2011.

A longtime breeder-owner-handler and judge in the world of purebred dogs, he has judged all over the world, including the U.S., Canada, Australia, Denmark and China, and has also enjoyed much competitive success with his Afghan Hounds, Brittanys and Cavalier King Charles Spaniel. His Ch. Stormhill’s Who’s Zoomin Who was the #1 Afghan in 1989 and retired as the top-winning female in the history of the breed.

But he is most proud of the wonderful work that his own dogs do as therapy dogs, regularly visiting patients and families at the Ronald McDonald House New York and at Memorial Sloan Kettering Cancer Center in New York. His Brittanys, Teigh and Belle, who have recently passed, pioneered the practice in many places, and his Cavalier, Angel, and Brittany, Grace, are carrying on for them today.

With Westminster, David helped to create Angel On A Leash, a charitable activity supporting a therapy dog program at the Morgan Stanley Children’s Hospital of NewYork-Presbyterian. Angel On A Leash has become an independent 501(c)(3) charity with David as president and CEO, and has expanded into a number of additional facilities across the country. The success of the program provided the inspiration for his new book of the same name.

David’s contributions to the world of dogs have been recognized by the Dog Writers Association of America in 2009 with its prestigious American Kennel Club Distinguished Service Award, and in 2010 by the World Dog Press Association with its Media Award.

He also does volunteer work with Transfiguration Church and School in New York’s Chinatown, and in 2006 was honored by the Transfiguration Education Association with a special award for “his loyal support of Transfiguration Schools and his dedication to philanthropic causes.” His work with Angel On A Leash and his own therapy dogs has been recognized by the American Cavalier King Charles Spaniel Club with its prestigious Patricia L. Kanan award, and by a number of other organizations as well.

David is the co-author, with Mike Lingenfelter, of The Angel By My Side, a critically-acclaimed best seller about a heroic service dog, published in 2002 (www.angelbymyside.com) and the winner of two DWAA awards as best book of the year.

In 2004, he appeared in one of the final episodes of the HBO hit series, Sex And The City, playing a smitten dog show judge awarding a big win to Charlotte and her Cavalier (mostly to Charlotte).

Previously, he held public relations positions with the Denver Broncos, San Francisco 49ers and ABC-TV Sports in New York. A native of Oregon, he owned two very unique and popular sports bar restaurants in the Seattle area, as well as his own public relations agency, before moving to New York City in 2002. His wife, Cherilyn, is a certified Catholic chaplain and Director of Spiritual Care and Family Support at The Ronald McDonald House of New York City.

We have 232 guests and no members online