Bobby Bones, musician, author, mentor of American Idol and last year's winner of Dancing with the Stars, will join Jon and Talkin' Pets 9/28/19 at 630pm ET to discuss our Nation's Veteran Heroes and service dogs through dogchow.com/service 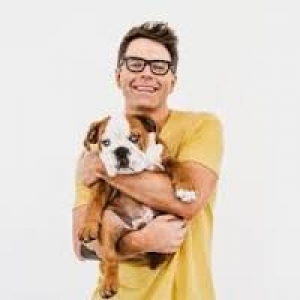 From Wikipedia, the free encyclopedia

Jump to navigation Jump to search

For the American musician and actor, see Bobby Bones (musician).

Bobby Bones (born Bobby Estell,[1] April 2, 1980)[2] is an American on-air radio personality, best known for hosting the nationally syndicated The Bobby Bones Show, originating at WSIX-FM in Nashville, TN. Bones is also serving as full-time mentor on American Idol on ABC, and was the winner of season 27 of Dancing with the Stars with partner Sharna Burgess. He has also written two New York Times best sellers and was a judge of Topgolf's original series Who Will Rock You.

Bones was born in Hot Springs, Arkansas, and raised in Mountain Pine, Arkansas.[1] He has said his mother became pregnant with him at age 15, when his father was 17.[3] He was raised in the small community of Mountain Pine, Arkansas, by his mother and maternal grandmother. His biological father was with him until the age of five, but then disappeared.[4] Bones began dreaming of a radio career around the age of 5 or 6.[5] He grew up poor in a trailer park, and often viewed radio as way of escaping poverty.[4] Bones began his radio career at age 17 at the campus station of Henderson State University, KSWH-FM 102.5 The Pulse. He graduated with a B.A. in Radio/Television from Henderson in 2002.[citation needed]

While still in college, Bones went to work as a station hand at KLAZ in Hot Springs, Arkansas, but was put on the air within a few days of being hired. A manager there gave him the choice of going on the air as Bobby Z or Bobby Bones.[5] Bones's first full-time radio contract paid him $17,000. In 2002, Bones was hired by Q100/KQAR in Little Rock, Arkansas. He then worked for radio station (KLAL), which led to his hosting The Bobby Bones Show on KHFI-FM in Austin, Texas.

Bones was originally hired for the evening shift on KHFI-FM and moved to the morning drive shortly after. While in Austin, he met two of his future co-hosts, Lunchbox (in a bar) and Amy (in a Culver's). He initially hired Sarah Osburn, who was familiar with the radio industry, but then decided that Amy would be a better fit. Bones believed in Amy and put her on the air immediately.[6] His executive producer, Alayna, was previously an intern on the show.

Over ten years, the show built its audience into the top-rated morning show in Austin[7] and was syndicated in a few regional markets. At the height of his popularity, Bones was offered a job outside of radio but ultimately chose to remain with Clear Channel.[8]

In the fall of 2012, Clear Channel moved Bones and his show from Austin with its Top 40 format to Nashville and a country music format while taking The Bobby Bones Show nationwide.[6] Bones took over the slot hosted by longtime DJ Gerry House,[9] who retired in 2010. Bones now broadcasts from WSIX-FM in Nashville on weekday mornings from 5:00 a.m. to 10 a.m. (CT). His co-hosts are Lunchbox and Amy, and features Ray, Eddie, Morgan, Mike D., and Morgan #2. Michael Bryan is the program director.

On air, Bones and his co-hosts break the country radio mold with a mix of pop-culture news and information. As Bones noted in one interview, "I'm not a cowboy. I don't wear a belt buckle, or I don't have those traditional old-school country music radio elements about me. But from where I grew up and how I grew up, country music has always been the fabric of the music that I've listened to."[11]

In February 2013, The Bobby Bones Show went into national syndication with Premiere Networks (owned by Clear Channel)[13] and was made available via iHeartRadio.com and the iHeartRadio mobile app. The show launched with 35 stations and is currently carried by 68 FM radio stations in the U.S.[14] It is regarded as central to Clear Channel's partnership with Country Music Television in what's been termed a “country music media arms race.”[8] According to Clear Channel Radio, which owns WSIX-FM, the show is the number one-rated morning show in Austin, Texas, Wichita, Kansas, Amarillo, Texas, and Lubbock, Texas.

Nationally, The Bobby Bones Show is the biggest country music morning show in the country, with an estimated audience of nearly 3 million listeners. The show's largest market is Washington, D.C., where WMZQ airs it weekdays from 6:00 a.m. to 10:00 a.m.[15]

As part of the Clear Channel organization, Bones was tapped to host the inaugural iHeartRadio Country Festival held in Austin, Texas, in 2014.[17] He presented the award for Country Song of the Year at the first iHeartRadio Music Awards in Los Angeles.[18]

Bones appeared in the 2009 feature film, Bandslam, with Vanessa Hudgens. He has also appeared on the ABC drama Nashville and has been a guest host with Kelly Ripa on Live! with Regis and Kelly.[19]

Bones is also the host of the podcast “The Bobbycast” where he interviews singers/songwriters of all genres. He has also launched his own podcast network, the Nashville Podcast Network.[citation needed]

On May 17, 2016, he released his first book entitled Bare Bones, I'm Not Lonely If You're Reading This Book.[21] The book became a New York Times Best Seller.[citation needed]

In 2018, Bones was a guest mentor for season 16 of American Idol (the first to air on ABC) during the top 24 round. On November 6, 2018, it was announced Bones would become a full-time mentor for the series beginning in season 17.[22] During an episode aired April 8, 2019, Bones served as guest host, as host Ryan Seacrest was sick and missed the taping.[23]

Dancing with the Stars

In September 2018, Bones was announced as one of the celebrities to compete on the 27th season of Dancing with the Stars, being paired with the professional dancer Sharna Burgess. Despite the second lowest scores for a couple in the final 4, the couple made it to the finals, and ended up winning the competition.[24]

According to the Washington Post, Bones is different from typical radio DJs, as he doesn't have the "classic, booming radio DJ voice".[25]

On September 28, 2013, Bones and his crew were part of a team that set the Guinness World Record "Most hunger relief meals packaged in one hour (team)".[26]

In October 2014, Bones accidentally triggered the Emergency Alert System, by playing EAS tones, during an on-air rant about an erroneous EAS test interrupting coverage locally of the 2014 World Series on Fox affiliate WZTV. The EAS tones, would have only triggered the EAS issuance in Nashville but the show was in syndication and so the signal cascaded through the show's nationwide affiliates, which caused AT&T U-verse boxes nationwide to lock up with the erroneous test.[27] In May 2015, Bones's employer iHeartMedia paid a $1 million FCC fine due to the incident and removed all EAS sound effects from their nationwide sound library to prevent a recurrence.[28]

For four years running, from 2004 to 2008, Bones was named Best Radio Personality by the Austin Music Awards, presented by The Austin Chronicle and SXSW. The Bobby Bones Show also won Best Radio Program 2007-2008.[31] On April 6, 2014, Bones, Amy and Lunchbox won their first Academy of Country Music Award for National On-Air Personality of the Year, just nine months into Bones's first year in country music.[32] Bones was inducted into the National Radio Hall of Fame during a ceremony on November 2, 2017, at the Museum of Broadcast Communications in Chicago[33]

On November 19, 2018, Bones and professional ballroom-dance partner Sharna Burgess won season 27 of Dancing with the Stars.