More than 1 Million Households Forced to Give up Their Beloved Pet Each Year, ASPCA Research Reveals

NEW YORK, NY—The ASPCA® (The American Society for the Prevention of Cruelty to Animals®) today released results of a published research study addressing the re-homing of cats and dogs in the United States, as well as the reasons behind why many pet owners feel they have no other choice but to re-home their pets.

“While some of the reasons people re-home their pets are quite complex and difficult to change, many reasons given by the respondents in this study might have been easily resolved through affordable, accessible veterinary care, pet-friendly housing and access to other supplies and resources,” said Dr. Emily Weiss, vice president of research and development for the ASPCA. “Knowing that many pet owners would’ve opted to keep their pet with them if they’d had access to such critical services   illustrates the need for programs and services that intervene and reach these pet owners before they’re forced to make this difficult decision. This is especially crucial in underserved communities where poverty rates are high and access to resources is limited.”

Of pet owners surveyed who reported having given up a pet within the last five years, the following trends were uncovered:

“Efforts to address animal homelessness often focus on helping animals in shelters, but this research and our own community-focused programs show we need to focus just as much on keeping pets from entering shelters in the first place, specifically by helping owners access critical resources,” said Matt Bershadker, president and CEO of the ASPCA. “When pets are kept out of shelters, it not only protects those animals, but keeps families together, and frees up critical shelter space and supplies for other animals in need.”

The ASPCA has seen firsthand how providing access to resources can help pets at risk. In June 2014, the ASPCA launched a “safety net” program at two of the highest intake Los Angeles County shelters. Since its launch, the program has assisted over 4,100 animals who were at risk of entering the shelter system. Early follow-up with a small sample of clients has reported that over 80% of these pets still remain in their homes. Over the past five years, the ASPCA has distributed nearly $4 million in grants to over 300 organizations in 46 states to support safety net programs.

The ASPCA estimates that of the approximately 7.6 million pets who enter animal shelters each year, approximately 2.7 million are euthanized.

About the ASPCA®
Founded in 1866, the ASPCA® (The American Society for the Prevention of Cruelty to Animals®) is the first animal welfare organization in North America and serves as the nation’s leading voice for animals. More than two million supporters strong, the ASPCA’s mission is to provide effective means for the prevention of cruelty to animals throughout the United States. As a 501(c)(3) not-for-profit corporation, the ASPCA is a national leader in the areas of anti-cruelty, community outreach and animal health services. For more information, please visit www.ASPCA.org, and be sure to follow the ASPCA on Facebook, Twitter, and Instagram. 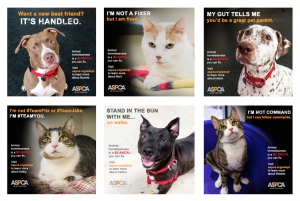 “Everyone knows that season four of Scandal is set to premiere tonight on ABC – and that everyone is desperate to know where Olivia Pope jetted off to. But there’s an even bigger scandal out there that the ASPCA wants to uncover: pet homelessness. In fact, the biggest scandal of all is that there are millions of pets in shelters across this country who just want a loving home. Well, the ASPCA wants to fix that.

By creating these six e-cards featuring famous lines from the show with animals available for adoption right now at the ASPCA Adoption Center, the organization would like to remind everyone to make pet adoption their first option and help get a handle on the number of homeless animals waiting in shelters for loving homes.”


Thousands of Greyhounds In Need of Permanent Homes Due to the Economy, Track Closings

Framingham, MA-A 40 mile per hour couch potato is just waiting to be adopted into a loving and permanent home and what better month than National Adopt-a-Greyhound month to welcome a beautiful, graceful and gentle greyhound into your family.

April is National Adopt-a-Greyhound month and the need to place greyhounds housed in temporary homes and facilities has never been greater. The Greyhound Project is spreading their message of greyhound adoption awareness to ensure that 100 percent of these greyhounds find caring homes.

In the last three years, 11 racetracks have closed around the nation because legislative initiatives and a struggling economy, putting enormous pressure on adoption groups to find homes for as many as 1,000 dogs at every track closing. Pending legislation in Florida may mean that many of its 13 tracks will soon close. Add greyhounds that have retired from still active tracks around the country and you have thousands of wonderful, elegant dogs being cared for by adoption groups as they wait to be adopted into their permanent homes.

“Greyhounds make great pets and companions,” said President of The Greyhound Project Michael McCann. “They are graceful and gentle and can be a great addition to any dog-loving family. Recent track closings and a struggling economy have resulted in fewer adoptions and more surrenders. National Adopt-a-Greyhound month is a great time to welcome these wonderful Greyhounds into loving and permanent homes.”

NEW YORK—The ASPCA® (The American Society for the Prevention of Cruelty to Animals®) today announced that it has awarded a grant of $7,000 to the Hidden Springs Horse Rescue (HSHR) in Marianna, Fla., which will be used to fund the rehabilitation of 14 neglected horses seized by local law enforcement last January. The grant funding will help cover the cost of hay, feed, and vaccinations, as well as veterinary, dental, and farrier care for the horses while HSHR works to restore their health and place them into permanent homes.

“We were saddened to hear about the suffering these horses had to endure,” said Jacque Schultz, senior director of the ASPCA Equine Fund. “The ASPCA has an extensive history of helping equines around the country, and we’re glad we were able to assist the HSHR in nursing these neglected horses back to health and finding them loving homes.”

“The grant that HSHR received from the ASPCA has been instrumental in allowing us to provide food and veterinary care for a large number of horses,” said Melanie L. Higdon, executive director of HSHR. “Additionally, the grant has enabled us to continue our operations and rescue more horses that are in need. Many of the rescued horses have been returned to their former majestic forms, and none of this would have been possible without the assistance from the ASPCA Equine Fund.”

Last year, the ASPCA Equine Fund awarded nearly $1.5 million in grant funding to 165 non-profit equine welfare organizations in 38 states whose focus and expertise is concentrated on reducing the suffering of equines who have lost their homes or been cruelly treated.

HSHR is a non-profit equine rescue that assists law enforcement and animal control by taking in abused, neglected, and abandoned horses. The organization provides veterinary care and places the horses into loving, permanent homes through their adoption program. For more information about HSHR, please visit www.FloridaHorseRescue.com.

Founded in 1866, the ASPCA® (The American Society for the Prevention of Cruelty to Animals®) is the first animal welfare organization in North America and serves as the nation’s leading voice for animals. More than two million supporters strong, the ASPCA’s mission is to provide effective means for the prevention of cruelty to animals throughout the United States. As a 501(c)(3) not-for-profit corporation, the ASPCA is a national leader in the areas of anti-cruelty, community outreach and animal health services. For more information, please visit www.ASPCA.org, and be sure to follow the ASPCA on Facebook, Twitter, and Pinterest.

Hidden Springs Horse Rescue (HSHR) is a 501(c)(3) non-profit organization dedicated to saving and improving the lives of horses. HSHR takes in and cares for a large number of rescued horses with the help of a crew of wonderful volunteers. The majority of the funds required to operate the program are raised through public support, there is no government funding for horse rescue services. For more information about the organization’s work, please visit www.FloridaHorseRescue.com.

We have 621 guests and no members online