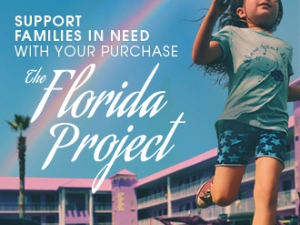 A24 will donate 5% of proceeds from first week digital sales of Sean Baker’s award-winning film The Florida Project to the Community Hope Center, an organization that assists families that are either homeless or living in motels along Osceola County's Highway 192 corridor, where the film was shot.

The Community Hope Center’s primary emphasis is serving the homeless and those living in motels and hotels. Through programs designed to restore dignity and self-sufficiency to those in need in Central Florida, the Center uses a holistic approach to case management, funds assistance, and life skills. The program—a collaborative effort between local churches, social service agencies, Osceola County, the city governments, and community businesses—is intended to provide gap services that other agencies are not currently providing. Find more information at http://hope192.com/

Set on a stretch of highway just outside the imagined utopia of Disney World, The Florida Project follows six-year-old Moonee and her rag-tag gang of friends. Moonee and her rebellious mother Halley live week to week at “The Magic Castle,” a budget motel managed by Bobby (Willem Dafoe), whose stern exterior hides a deep reservoir of kindness and compassion. With The Florida Project, Sean Baker gives life and a voice to a community rarely seen on screen. Through the eyesof Moonee, Halley, and Bobby, Baker has created a spellbinding and transformative portrait of contemporary lives lived in the margins. The Florida Project declares, boldly and proudly, that anywhere can be a Magic Kingdom—it just depends on how you see it.

Willem Dafoe’s performance in The Florida Project has been called a “career best” and earned him an Academy Award nomination for Best Supporting Actor. The Florida Project appeared on over 200 Top 10 lists and was named the Best Film of the Year by The New York Times.

The title is now exclusively available to own in digital HD before it is released on DVD and      Blu­‑ray. Buy the film between 1/30 and 2/5 on iTunes, Amazon, Google, Xbox, Playstation, Vudu, Fandango, Comcast, and Verizon to help support families in need. 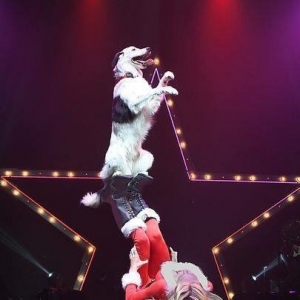 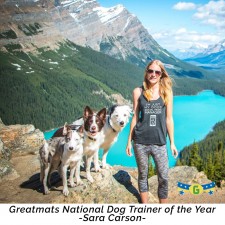 2017 A Year to Rember for Trick Dog Trainer

Milltown, WI, December 15, 2017 (Newswire.com) - When it comes to dog trainers, few have had a bigger breakout year than the 2017 Greatmats National Dog Trainer of the Year - Sara Carson of The Super Collies.

Well known as the America's Got Talent finalist who moved from Canada to the United States and built a name for herself and her dog, Hero, while living out of her car, Sara inspired people from all across the country to pursue their dreams - even if others close to them do not share their passion.

Despite now being recognized as one of the top trick dog trainers in the world, the 23-year-old up and comer said, ''I don't think I've ever been nominated for an award before. ... It means a lot to me. I've been a dog trainer for about 12 years now. So just the fact that some people take time out of their day to vote for me says I'm doing something right I guess - because there are a lot of dog trainers. That support is really great. I'm really thankful for it.''

That's just one aspect that made this year's nomination for Greatmats National Dog Trainer of the Year Award so special. The other is the fact that joining her in the finals was another dog trainer she knows and respects - Dee Hoult of Applause Your Paws of Miami, Florida.

''I'm actually quite good friends with her,'' Sara said of Dee. ''I stayed at her house for a few days and went to her training facility. I'm supposed to be teaching there next year.''

In the meantime, Sara's still spending most of her time on the road - as she has done for the last 3 years after leaving the training facility she had started in Canada at the age of 15. Aside from the performance side of her job, Sara's also helping others train their dogs through an app, called Puppr, that she came out with less than a year ago and now reaches about 6,000 users per month.

''When I was on the road in my car, I wanted a way to kind of reach out to people more so we came up with that thing and it's been a really really cool experience, getting people just emailing me and sending in their footage of their training, and I help them digitally,'' she said.

As the winner of the Greatmats National Dog Trainer of the Year Award, Sara has chosen to receive Greatmats Dog Agility mats as her prize.

''I did just get a house which is super exciting,'' Sara said. ''I need a little indoor training space for my dogs, and I think that would be a super cool opportunity.''

Runner Up Dee Hoult
No stranger to having a strong support system in the dog world, Dee Hoult was still surprised and pleased to know that people are following her work and recognizing what she and her trainers at Applause Your Paws are doing.

''They really care and are really passionate about all of the things that we do,'' Dee said of her clients and community.

She also noted how much fun it was watching her supporters throughout the contest.

''I love how into it people get. I love being reminded how engaged my customer base really is. A majority of the people that contributed to our vote count are actually our customers. We have about 5,000 person customer base.''

Dee, who won her first blue ribbon with one of her dogs at age 5, is now 35 and has been a professional in the industry since 2006. She was nominated due to the work she has done in the Miami-Dade County Rehabilitation Boot Camp, helping inmates through dog training. But that is just one part of how she has inspired those around her. She is also passionate about helping community and county shelters lessen the number of animals that are euthanized each day by working with the transfer office to get friendly animals new homes in other parts of the country.

Sara and Dee combined to accumulate more than 2,500 votes in the annual contest, which saw its largest voting turnout ever. More than 3,800 total votes were cast in the 3rd Annual Greatmats National Dog Trainer of the Year Contest.

BETHESDA, Md., USA – Oct. 10, 2016 – Cat advocates have scheduled over 1,000 events worldwide to join Alley Cat Allies in celebrating the 16th anniversary of National Feral Cat Day on Sunday, Oct. 16, 2016. Inspired by this year’s theme, “All Cats All Communities,” supporters from around the world are advocating for the lives of cats and educating their communities about humane policies, like Trap-Neuter-Return (TNR), that help save cats’ lives and protect all cats in all communities.

“For more than 26 years, Alley Cat Allies has been leading the movement to protect and improve the lives of cats everywhere, and this year’s National Feral Cat Day theme reflects that,” said Becky

Robinson, president and founder of Alley Cat Allies. “From the pet cats in your home to the outdoor cats in communities around the world, all cats deserve our care and protection. Together, we are creating change that saves their lives.”

A full listing of events in local communities is located atNationalFeralCatDay.org/actions. Supporters worldwide have organized more events this year than any in the 16-year history of National Feral Cat Day. Volunteers in every corner of the world are holding spay/neuter clinics and food and supply drives, arranging educational sessions, hosting adoption events, encouraging official governmental proclamations, and raising funds to support local TNR programs.

Even if you have just five minutes available, there is still time to get involved and help raise awareness about the issues that impact all cats. Visit NationalFeralCatDay.org/ideas to see simple suggestions such as signing a pledge to protect the lives of cats, sharing a selfie on social media to display your National Feral Cat Day pride, or reading a newsletter. Visit www.NationalFeralCatDay.org/gear and find educational materials to inform others, and gear to show off your National Feral Cat Day pride.

Alley Cat Allies, the only national advocacy organization dedicated to the humane treatment of cats, launched National Feral Cat Day 2001 as a call to action to raise awareness about community cats, promote TNR as the only effective method of stabilizing cat populations, and empower and mobilize the millions of compassionate Americans who care about cats everywhere.

Follow all the activities for National Feral Cat Day on social media with the #feralcatday hashtag.

Alley Cat Allies, headquartered in Bethesda, Md., is the only national advocacy organization dedicated to the protection and humane treatment of cats. Founded in 1990, today Alley Cat Allies has more than 600,000 supporters and helps tens of thousands of individuals, communities and organizations save and improve the lives of millions of cats and kittens worldwide. Its website is www.alleycat.org, and Alley Cat Allies is active on Facebook, Twitter, Instagram, Google+ and YouTube.

Linda Kramer, CEO of Daybreak/Lindy & Company will join Jon and Talkin' Pets 7/9/16 at 630pm EST to discuss her nonprofit dog treat bakery, give away dog treats and discuss Daybreak the non-for-profit that helps homeless teens. 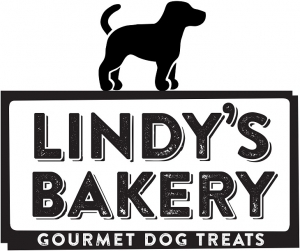 The launch lineup of Lindy’s Bakery gourmet pet treats includes 10 SKUs with many more in development. The line includes indulgent flavors as well as grain and gluten free offerings. Treats range in price from $5.99 to $6.99 and comes in unique flavors such as Apples & Cheese Please and Grain Free Carrot Cake. To learn more and support a great cause, please visit www.daybreakdayton.org.

Created by the nonprofit Daybreak, Lindy’s Bakery is a gourmet pet treat bakery that teaches homeless teens and young adults valuable work skills so they will never be homeless again. 100% of proceeds from the sale of Lindy’s Bakery pet treats go directly to Daybreak. These funds provide emergency shelter, housing, and support for over 500 homeless teens and young adults each year! Please visit www.lindyandcompany.com for more information.

TLC ROOTS FOR BOSTON UNDERDOGS IN NEW SPECIAL
PREMIERING AUGUST 12
(Los Angeles, Ca.)  Dogs are not only a man’s best friend for this Irish-Boston canine lover in TLC’s new special BOSTON UNDERDOGS. Stacia Gorgone is Boston’s spunkiest and most passionate dog lover. After losing her spotted, four-legged best friend, Stacia decided to dedicate her blood, sweat, and tears into rescuing dogs. As owner of her own dog rescue, KickAss K9, and with the help of her three best friends, Stacia is completely determined to rescue every dog and will not stop until all of her four-legged furry friends find a loving home. BOSTON UNDERDOGS premieres in a one-hour special Monday, August 12 at 10 PM (ET/PT).
Stacia will stop at nothing when it comes to saving dogs.  But while her dog rescue, KickAss K9, is growing by leaps and bounds, so are her life's problems.  With almost no financial funding, Stacia's inability to say no to a dog in need continually lands her in hot water - putting relationships with her boyfriend, family, and life-long friends in jeopardy.  Stacia believes she has found the man of her dreams, but does her heart belong to him or the dogs? Although Stacia believes working with dogs brings nothing but happiness to people’s lives, it seems that theory doesn’t apply in a female brawl between two of her closest friends as they allow past high school drama get in between them.  With Boston's St. Patrick's Day parade just around the corner, Stacia has an opportunity to make things right with those closest to her, while raising enough money to save more dogs – but her tendency to act with her heart, instead of her head, puts all of this at risk.
Read more...

Three sister puppies that are Jack Russell and poodle mix approximately 3 months old need forever homes. These puppies are extremely active and need space to run. They are paper trained and have their shots, we will have them spayed for whomever adopts them. They have wonderful personalities and need lots of attention. They like other animals both dogs and cats.

We have 714 guests and no members online