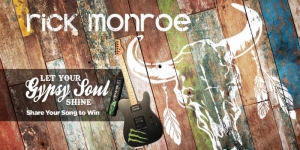 Nashville, TN (October 9, 2017) - Singer/songwriter Rick Monroe invites fans to sing from their "Gypsy Soul," via a contest that launches today on Facebook.  Entrants have until November 13 to film their own version of Rick's signature tune, post the video to Monroe's Facebook page and then solicit "likes."  The entrant with the most "likes" wins the contest.  Contest rules are explained in a YouTube video; fans can get a free download of "Gypsy Soul" by texting "Rick" to 38470, or by clicking HERE.  Lyrics are available on Monroe's FB page and website.
The grand prize is a Monster-branded Schecter Electric Guitar, and additional prizes include Westone Audio UMPRO 30 in-ear monitors, a Rip Tide Ukulele from World Music Nashville, a custom Gypsy Soul ring from Speakeasy Original Jewelry, a box of Medium Acoustic Strings and t-shirt from GHS Strings, a Shubb Capo and t-shirt, and a Camo Soft cooler, hat, t-shirt and license plate from Banded.com.  The contest, presented in conjunction with Evok Advertising & Marketing, runs today through November 13, and winners will be announced on November 20.  "Gypsy Soul" is the title track of Rick's current EP, which can be purchased from iTunes.
Rick toured heavily this year, entertaining fans with the sultry Billboard hit, "This Side of You," and other songs from GYPSY SOUL.  Monroe also revisited tunes from his previous project, IT'S A LOVE THING, including the previous Billboard hit "Great Minds Drink Alike."  Rick made time to participate in several charity events, including a July house build for the Murfreesboro, Tennessee chapter of Habitat For Humanity.  He also played in the annual Team Gamez golf tournament supporting The Boys and Girls Club, performed at a fundraiser for Folds Of Honor during The Masters Golf Tournament in Augusta, Georgia, and participated in the Hike for the Homeless, benefitting Safe Haven Family Shelter, Middle Tennessee's only shelter-to-housing program for families.

Singer/songwriter Rick Monroe will join Jon and Talkin' Pets 5/13/17 at 630pm EST to discuss and give away his new EP, Gypsy Soul 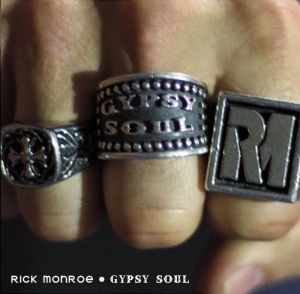 Nashville, TN (May 8, 2017) -- Singer/songwriter Rick Monroe has been hard at work for the last several months promoting the May 12 release of his new EP, GYPSY SOUL.  Now, with the clock ticking to Friday's official release, Monroe is doubling down.  One Country will premiere the disc's title track today, and fans can listen live tomorrow, May 9, when Rick visits with Devon O'Day at 5:15 p.m. CT on WSM-AM's "Nashville Today" show.  On Wednesday, The Boot will premiere "Rage On," the Outlaw/Southern Gospel sensation from the six-track EP; The Alternate Root will feature the gritty number in their Top 10 Songs of the Week on Saturday.  Sean Giovanni (John Rich, Clint Black, Big & Rich) produced five tracks for the project, while renowned engineer/producer JD Shuff (Collin Raye, CeCe Wynans) helmed one.  GYPSY SOUL can pre-ordered now at iTunes.

"A great introduction to Monroe's skills as a singer and songwriter. It's a journey that visits just about every facet of his musical soul, and with sumptuous results."

The EP's groove-based first single, "This Side Of You," is already resonating with radio and listeners alike.  The track is currently sitting at #52 on the MusicRow CountryBreakout™ Chart, and holds the #60 position on the BILLBOARD Indicator Chart.  Fans can enjoy the track on Spotify.

Rick's live shows are also garnering attention, and promoters are applauding his talents:

"WOW!  People were talking about this for weeks after his performance.  Not an empty seat in the house.  Oh, did I mention, he was up against Miranda Lambert who was in concert down the road?"

"Rick Monroe put on an awesome show; he had the crowd rocking from the first song till the last."

"Rick is a favorite at the Mad Boar.  A class act, one of the best we have ever had, can't say enough about him as an artist and a person."

In addition to performances and appearances at CMA Music Festival 2017, Rick's upcoming shows include: