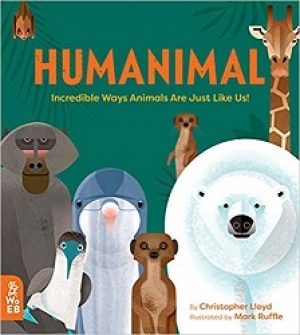 From author ofAbsolutely EverythingChristopher Lloyd comes a fascinating book uncovering the curious connections between humans and other animals.

So you think you're special? You think that just because people have built giant cities, invented pop-up toasters and put a person on the Moon that they are somehow different from other living things? Well it's time to think again!

HUMANIMALshows the inextricable interconnections of the human and animal worlds in ways you never before imagined... Inside you will discover how slime moulds can solve how to navigate through a maze; how rats tickle and laugh out loud; how elephants have funerals for their lost loved ones; how bees vote in elections to decide where to locate their nests; how crows use cars to crack nuts and a whole lot more! This oversized, richly illustrated, mesmerizing exploration shows that humans and other animals don't just live on the same planet, they also share many of the same patterns of behavior, making us all fellow players in the drama that is life on Earth.

GIFTS OF THE CROW

How Perception, Emotion, and Thought Allow Smart Birds to Behave Like Humans

By John Marzluff and Tony Angell

In the depths of winter 2012, this compulsively watchable video of a crow sledding down a roof in Russia on jar tops http://www.youtube.com/watch?v=3dWw9GLcOeA&sns=fb went viral, sparking debate among its almost 700,000 viewers around the world.  Crow expert and author John Marzluff received it from enthusiastic viewers from across the United States and several different countries around the world.

In GIFTS OF THE CROW: How Perception, Emotion, and Thought Allow Smart Birds to Behave Like Humans (Free Press, June 5, 2012, $25.00), Marzluff, the preeminent researcher on crows, teams up with artist and fellow naturalist Tony Angell to offer an astonishing look at the little-known and largely underappreciated intelligence of the birds of the amazing corvid family, which includes crows, ravens, and jays. Showing that these “bird brains” are actually quite sophisticated, Marzluff and Angell tell fascinating, true stories of surprising crow behavior, such as crows using tree bark to wind surf along ridge tops, tools to get food from hard-to-reach places that human babies can’t figure out, and, most surprising of all, giving gifts to people who help or feed them. Along with these and other amazing stories, the authors explain the engrossing, breakthrough science that accounts for this behavior, as well as arresting illustrations of the crow’s antics and anatomy.

In GIFTS OF THE CROW, Marzluff and Angell prove that crows are highly intelligent, undeniably emotional, and much more similar to humans than we ever imagined. In fact, Marzluff and Angell reveal, crows have taken on seven key human characteristics: language, delinquency, insight, frolic, passion & wrath, risk-taking, and awareness. Their unusually large and complex brains, long lives, social lifestyles, and shared habitat with humans have led to crows evolving these human traits. With surprises on every page, Marzluff and

Exciting and conversation-changing, GIFTS OF THE CROW reveals new discoveries about crows’ intelligence, behavior, and relations with people and other animals, as it provides a fresh theory about how crows have assumed human traits—and what their behavior tells us about ourselves.

In an interview about GIFTS OF THE CROW, John Marzluff and Tony Angell can discuss:

· What makes corvids so much more like humans than other species, such as the eagle, whale, or bear

· The symbiotic relationship between crows and humans: how they adapt to us and learn from us and what we can learn from them

· Why crows over the years have been considered clever, from Aesop to Dickens to Poe to today, and why the term “bird brain” is not an insult but a compliment

· Their most surprising and poignant astonishing discoveries about crows

· How these findings about the amazing abilities of crows should influence the way we, as humans, go about protecting and preserving these and other sentient beings.

John Marzluff, Ph.D., is Professor of Wildlife Science at the University of Washington. The author of four books and more than one hundred scientific papers on various aspects of bird behavior, his research has been the focus of articles in the New York Times, National Geographic, Audubon, Boys Life, The Seattle Times, and National Wildlife. PBS’s NATURE featured his raven research in its 2001 production “Ravens,” and featured his crow research in 2010 with the documentary film, “A Murder of Crows.” John has been a guest on NPR’s Diane Rehm Show, the Jay Thomas Show, and Morning Edition.

Tony Angell has authored and/or illustrated a dozen award-winning books related to natural history. Most recently, his drawings in the coauthored book, In the Company of Crows and Ravens, received the prestigious Victoria/Albert prize. His works are continuously available at galleries in Seattle and Santa Fe and are in several museums and corporate collections across the country.

We have 655 guests and no members online