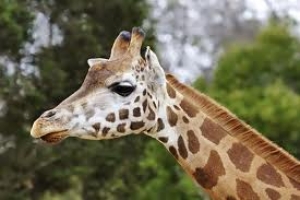 Oakland, CA, March 7, 2012.... On Thursday, March 8, 2012 at 11:00am, Dr. Joel Parrott, President & CEO of Oakland Zoo, will be surrounded by supporters, friends of the Zoo, volunteers, and staff as a new giraffe barn is unveiled. The Zoo’s new 1500 square-foot barn will accommodate a herd of nine giraffe. “Benefiting the animals should always be our clear goal,” stated Oakland Zoo Zoological Manager Michelle Jeffries. “With the help of Oakland Zoo supporters, new facilities like this barn become a reality.” Thanks to contributors, led by Robin Reynolds and George Zimmer, funding was made available to raise the roof for the Zoo’s nine reticulated giraffe.

The new barn is designed to better accommodate the animals and their specific needs – twenty-five foot ceilings, a birthing area, space for medical procedures, two large doors specially designed to create a round-about where animals can shift easily in and out of the barn, and a floor made out of materials best suited for hoof stock. The new barn replaces old structures that were outdated and need of repair. The Zoo is still seeking additional funding for medical equipment needed for the giraffes' medical care. For information on making a donation, please contact Emma Lee Twitchell, Oakland Zoo's Development Director at (510) 632-9525, ext 153.

The Bay Area’s award-winning Oakland Zoo is home to more than 660 native and exotic animals. The Zoo offers many educational programs and kid’s activities perfect for science field trips, family day trips and exciting birthday parties. Nestled in the Oakland Hills, in 500-acre Knowland Park, the Zoo is located at 9777 Golf Links Road, off Highway 580. The East Bay Zoological Society (Oakland Zoo) is a nonprofit 501(c)3 organization supported in part by members, contributions, the City of Oakland and the East Bay Regional Parks. For more information please visit our website at www.oaklandzoo.org.

SACRAMENTO, CA - Governor Jerry Brown signed the California shark fin ban, AB 376, into law on Friday, making California the the fourth state to pass a ban on the sale of shark fins.

Shark finning is a process by which fishermen catch sharks, slice off their fins and tails, then throw the fish back into the water to die. Up to 73 million sharks are killed through finning every year, pushing some shark populations to decline by as much as 90 percent in recent years. About 85 percent of U.S. shark fin consumption occurs in California.

The bill’s passage marks a huge win for the Asian Pacific American Ocean Harmony Alliance (APA Alliance), an organization that formed to give voice to Asian Americans who support the ban on the sale of shark fins. Bill Wong, a member of the APA Alliance, recruited more than 25,000 people to join a campaign on Change.org calling for passage of the ban. The APA Alliance was one of the bill’s sponsors, organized call-in days, and was instrumental in pushing Gov. Brown to support AB 376.

"We applaud Governor Brown for signing AB 376,” said Bill Wong, creator of the petition on Change.org and member of the Asian Pacific American Ocean Harmony Alliance. “It puts California at the forefront of the global effort to save sharks led by a broad coalition of Asian Pacific Americans, conservationists, animal rights activists, commercial fishermen, business leaders and artists. The passage of this bill may just be the tipping point that will preserve the shark species and the ocean ecosystem."

AB 376 passed in the state senate in early September, giving Governor Brown until October 9th to either veto the legislation or sign it into law. Despite lobbyists for fin importers and the restaurant industry pressuring Gov. Brown to veto AB 376, he signed the bill into law on October 7th.

“The APA Alliance started a petition on Change.org in support of AB 376 even before the bill was put up for legislative proposal,” said Sarah Parsons, Senior Organizer at Change.org. “The organization has worked to build momentum for this legislation for months, successfully getting many members of the Asian American community to support AB 376. It has been encouraging to watch people from across the state come together to express their support for a shark fin ban.”

The ban goes into effect on January 1, 2012, but businesses and individuals can sell shark fins obtained before the ban went into effect until July 1, 2013. California is now the fourth U.S. state to enact a ban on the sale of shark fins, joining Hawaii, Washington, and Oregon.

To view the APA Alliance’s petition on Change.org:
http://www.change.org/petitions/join-the-apa-alliance-to-ban-shark-fin-in-california

For more information on Change.org, please visit:
http://www.change.org/about
Change.org is the world’s fastest-growing platform for social change — growing by more than 400,000 new members a month, and empowering millions of people to start, join, and win campaigns for social change in their community, city and country.