David Frei - The Voice of Westminster joins Jon at 7:30 PM EST from Hotel Penn on February 11 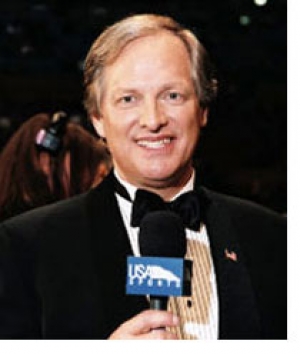 David Frei is well-known to millions of television viewers as the longtime co-host of USA Network's annual telecast of the popular Westminster Kennel Club dog show.

Since 1990, David has co-hosted the Westminster coverage from New York's Madison Square Garden, a live telecast seen by millions of viewers every year. In connection with that role, he has made many appearances on The Today Show (NBC), Good Morning America (ABC), The Early Show (CBS), Charlie Rose (PBS), National Public Radio, Fox News Channel, MSNBC, CNN and more. David also co-hosts the NBC television coverage of The National Dog Show every Thanksgiving Day.

A longtime breeder-owner-handler and judge in the world of purebred dogs, he has enjoyed much success with his Afghan Hounds and Brittanys. The most famous was Ch. Stormhill's Who's Zoomin Who, the #1 Afghan in 1989 who retired as the top-winning female in the history of the breed. He has exhibited his Brittanys in conformation and field trials, but is proudest of the fact that his Brittanys, Teigh and Belle, are registered therapy dogs that visit people in hospitals, nursing homes and hospice every week..

David is the co-author, with Mike Lingenfelter, of "The Angel By My Side," a critically-acclaimed best seller about a heroic service dog, published in October 2002. He is a trustee for Take The Lead, a national non-profit foundation providing support for members of the dog show family suffering from terminal disease or life-threatening illness. He is a charter member of Morris & Essex Kennel Club, serves on the board of the Dog Writers Association of America.

A past president of the Afghan Hound Club of America, he chaired the widely acclaimed Afghan Hound World Congress in San Diego in 1995, which hosted more than 500 fanciers from 23 countries. Licensed by the American Kennel Club to judge Afghan Hounds, he has officiated at shows throughout the U.S., Europe, Australia and Canada.

David is co-chair for the annual Transfiguration School and Church Benefit Dinner in New York's Chinatown. He is also scheduled to appear in a role in the HBO hit series, Sex And The City in 2004. He will play a dog show judge in one of the final eight shows of the series.

Previously, David has held public relations positions with the Denver Broncos, San Francisco 49ers and ABC-TV Sports in New York. His wife, Cherilyn, is a chaplain resident at New York Presbyterian Weill Cornell Medical Center, and they live in New York City with their two Brittanys.

We have 806 guests and no members online