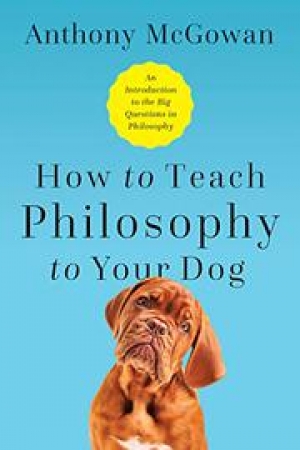 HOW TO TEACH PHILOSOPHY TO YOUR DOG

Monty was just like any other dog. A scruffy and irascible Maltese terrier, he enjoyed barking at pugs and sniffing at trees. But after yet another dramatic confrontation with the local Rottweiler, Anthony McGowan realizes it’s high time he and Monty had a chat about what makes him a good or a bad dog.

Taking his lead from Monty’s canine antics, McGowan takes us on a hilarious and enlightening jaunt through the major debates of philosophy. Will Kant convince Monty to stop stealing cheesecake? How long will they put up with Socrates poking holes in every argument?

How to Teach Philosophy to Your Dog (Pegasus Books; 2/4/2020) is an introduction to the big questions in philosophy. In this uniquely entertaining take on morality and ethics, the dutiful duo set out to uncover who―if anyone―has the right end of the ethical stick and can tell us how best to live one’s life.

About the Author:Anthony McGowan has a BA, MPhil, and PhD in philosophy, and has lectured widely on philosophy and creative writing. He is one of the funniest writers around. As an author for children and young adults he’s won many awards, while The Art of Failing, a hilarious account of his life as a writer, was named an Observer Book of the Year. He lives in North London with his wife and two children.

“McGowan playfully explores philosophy in this amusing collection of imaginary dialogues conducted with his Maltese terrier, Monty. Readers who have never roamed the paths of philosophy before, or who could use a return trip, will appreciate this enjoyable tour from a friendly guide and his loyal companion.”

“Filled with sparkling insights, a joy from start to finish. In turns witty, brilliant and irreverent, McGowan explains nothing less than the meaning of life – to his dog. If only we were all as lucky as Monty to go for long walks with the author.”