Author of Owling, Mark Wilson will join Jon and Talkin' Pets on Saturday 10/26/19 at 5pm ET to discuss and give away his new book 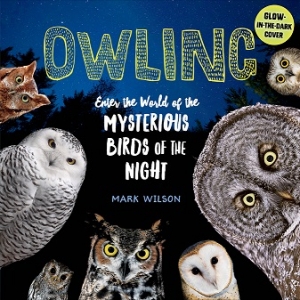 Uncover the Magic and Mystery of the Owl
Owls have long fascinated the minds and inspired the imaginations of children, from Harry
Potter’s Hedwig to Archimedes in the classic Disney film The Sword in the Stone. Their
huge, all-seeing eyes compel us to wonder what they see and what they know. But are
they really as wise as they seem? In fact, owls had to give up some valuable space in their
skulls to make room for those large eyes, and with only moderately sized brains, they aren’t
quite as enlightened as they may look.

This is but one of the hundreds of fascinating facts uncovered in Owling, a book that
takes kids aged 8–12 deep into the often hidden lives of these awesome predators.
With more than 100 stunning images from owl expert and award-winning photojournalist
Mark Wilson, Owling invites readers to take a close-up look into the habits and abilities
of these captivating raptors. Alongside cleverly explained lessons in owl anatomy,
physiology, and behavior, Wilson presents in-depth profiles of the 19 species of North
American owls, showcasing where they live, what they sound like, how to spot them,
and much more.
Owls are all around us — in the daytime and the night — and likely closer than we realize.
With sharp eyes, eager ears, and the knowledge gleaned from Owling, kids have the
opportunity to venture into this secret world where the owls are watching and waiting
for their arrival.
ABOUT THE AUTHOR
Mark Wilson is an award-winning wildlife photojournalist who has written about and
photographed birds for more than 35 years. He and his wife run Eyes On Owls, an educational
program that brings live owls to schools and community groups. He lives in Dunstable,
Massachusetts.

We have 476 guests and no members online