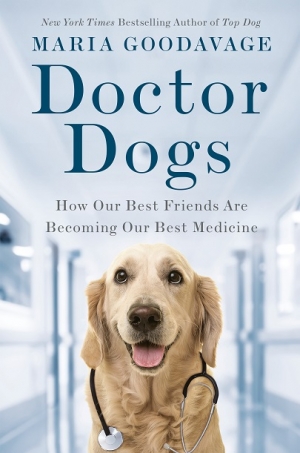 When members of Navy SEAL Team Six raided Osama bin Laden's compound on that now infamous night last spring, they didn't go in alone. They were joined by Cairo, the Belgian Malinois who captured America’s heart and imagination with his furry and heroic swagger. Now journalist Maria Goodavage, an editor and featured writer at the popular website, Dogster, goes behind the gated government facilities to discover the untold stories of military working dogs and handlers across all four services.

Goodavage, a former USA Today reporter, provides an unprecedented window into the world of these adventurous, loyal warriors. A detailed account driven by extensive “boots-on-the-ground” reporting, SOLDIER DOGS recounts the tales of dozens of incredible military working dogs, including the legendary Lars J274, a scrappy 15-pound Jack Russell terrier and seven-year veteran who sniffs out explosives on submarines, as well as Fenji M675, an IED-seeking dog on the treacherous front lines in Afghanistan. Moving beyond the schools where dogs and handlers first earn their chops, Goodavage speaks with dog-cognition experts about why dogs love nothing more than a mission with someone they trust—even if they have to rappel from helicopters deep in enemy territory.

Soldier dogs are an invaluable, limited-in-number asset to military operations, but some, like their human allies, return from missions too scarred from battle to ever resume active service. This occurrence has recently led military veterinarians to officially recognize canine post-traumatic stress disorder. Goodavage discusses canine PTSD in SOLDIER DOGS, where we meet Buck P027, a chocolate Lab suffering from this affliction.

Heartwarming and informative, this book is the perfect read for dog lovers, military enthusiasts, and anyone wondering how the dogs who share their homes and lives could possibly be related to these helicopter-jumping, explosives-seeking canine heroes.

Maria Goodavage, a former reporter for USA Today and the San Francisco Chronicle, is the news editor and a featured writer for Dogster.com, and author of three other dog-oriented books.

We have 659 guests and no members online