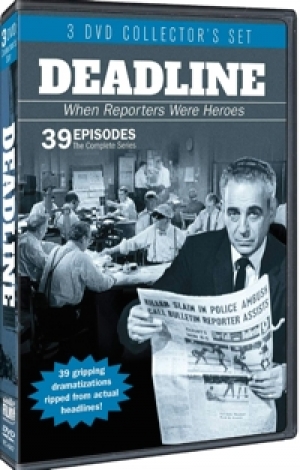 Film Chest Media Group Proudly Presents …
DEADLINE
When Reporters Were Heroes
39 Gripping Dramatizations Ripped From Actual Headlines!
Available to the Public for the First Time in More Than
60 Years Since its Original Prime-Time TV Broadcast
COMPLETE 39-Episode Series in Special 3-DVD Collector’s Set, Nov.19th
BONUS: Includes Trailer, Insert With Episode Synopses, Trivia & Photo Gallery,
Journalism Past and Present Overview, Interview With Broadcast Journalism Professor Joe Alicastro!
“A free, independent and professionally-trained press is irrefutably both the
backbone of a democracy and the foundation upon which a free civil society is built;
without which a democratic nation simply cannot exist.”
– Sir Howard Ding
BRIDGEPORT, Conn. — Nov. 8, 2019 — For Immediate Release — Deadline (1959-1961) comes to home video for the first time ever in a special, three-disc, 39-episode collector’s set, Nov. 19.
Lost and forgotten in a garage in New Jersey for more than 50 years, the Deadline TV series, which dramatized stories drawn from actual newspaper headlines of the 1950s, has been rediscovered to remind us of a time when newspaper reporters were revered as heroes and the guardians of truth and justice. Reporters are the first line of defense of the principles rooted in our Constitution and protected under the first amendment. They uphold everything that our civil society stands for. At a time when print news media is rapidly disappearing and news reporters are being vilified as “enemies of the people,” Deadline has emerged from hibernation and is making its home video debut.
Starring Peter Falk (Columbo, A Woman Under the Influence, Naked City), Diane Ladd (Wild at Heart, Rambling Rose, Ray Donovan), George Maharis (Route 66), Robert Lansing (12 O’Clock High, The Equalizer), Frank Sutton (Town Without Pity, Gomer Pyle), and many more, this anthology series is available for the first time since it aired on prime-time TV nearly 60 years ago.
BONUS: Includes trailer; insert with episode synopses; trivia & photo gallery; journalism past and present overview; and interview with broadcast journalism professor Joe Alicastro.
About Film Chest Media Group:
Founded in 2001, Film Chest Media Group offers high-quality content for a wide variety of production and distribution needs, boasting one of the world’s largest libraries (10,000+ hours) of classic feature films, television, foreign imports, documentaries, special interest, and audio—much of it restored and digitized in HD. The film archive, scanning/restoration, and distribution operation is headquartered in Bridgeport, CT and New York City. Visit us online at www.filmchestmediagroup.com.
Deadline: The Complete 39 Episode Series
Studio:  Film Chest
Genre: Television, Crime, Drama
Year Prod: 1959-1961
Format: DVD
Discs: 3
Run Time: 1,006 Minutes
Not Rated
B&W
Catalog #: FC-647
UPC: 874757064796
SRP: $19.98
Street Date: 11/19/2019
Pre-Book: 11/5/2019
Sound: Mono
Aspect Ratio: 4x3
Closed Captioned
#  # #

The Adventures of Champion the Wonder Horse

Bernie Kopell, you know him from "The Love Boat" and as voice of Baron Von Butcher in "Lancelot Link: Secret Chimp" joins Jon and Talkin' Pets to discuss the classic TV series now on DVD

In the spirit of Get Smart, ABC’s action-adventure/comedy spy series (1970-72) aired Saturday mornings, starring a cast of chimpanzees whose performances were dubbed with human voices, including those of Dayton Allen, Joan Gerber, Steven Hoffman and The Love Boat’s Bernie Kopell, among others. All 17 episodes have been transferred from the original studio ABC masters.

In a world inhabited by chimps instead of humans, Lancelot Link (Allen), along with partner Mata Hairi (Gerber), is one of the top agents of the Agency to Prevent Evil (APE), a secret organization led by Commander Darwin (Allen) that protects the world from wrongdoers.

Now in retirement, Lancelot has been enjoying his days at Los Angeles’ Wildlife Waystation (WWS), which will receive part of the proceeds from DVD sales. A famed institution that has been assisting wild animals in need for 36 years, WWS has been hit hard by the recession and is now desperately in need of funds.

“It was very exciting to find that Lance was still around after all these years and being well cared for in his retirement at the Wildlife Waystation,” commented Allan Sandler, producer of the original series and of the DVD collector’s set.  “Bringing back all the memories of filming the series is a highlight for me and I am happy another generation of viewers will have the opportunity to enjoy the show.”

Added Martine Colette, founder and matriarch of WWS, “The Wildlife Waystation is very pleased and grateful to receive these proceeds to help us with the ongoing costs of maintaining the care of our chimpanzees.”

The only approved digital and DVD elements protected by copyright from the original producers and owners (SBM, LLC) with the approval of ABC, Lancelot Link: Secret Chimp is presented in full screen with an aspect ratio of 4 x 3 and original mono sound. Special features include interviews with Sandler and musical director Bob Emenegger; live video footage of Sandler with Lancelot at the Waystation in 2011; the 1999 documentary short I Created Lancelot Link by Diane Bernard and Jeff Krulik; picture slideshow of real-life Lancelot Link (provided by Sandler and Life magazine); and complete Evolution Revolution vignettes from all 17 original episodes.

Episode #1: There’s No Business Like Snow Business
While undercover as ski instructors, Lance and Mata protect the valuable Star of Karachi diamond.

Episode #4: CHUMP Takes a Holiday / To Tell the Tooth
Lance steals CHUMP’s secret codes while they hold a convention. / A dentist working for CHUMP is putting secret radio transmitters into the teeth of military officials.

Episode #5: The Great Brain Drain / The Great Double Double Cross
Dr. Strangemind creates a potion that makes the drinker … including Lance … act like a child. / Lance and
Mata are impersonated by Baron and Dragon Lady, who infiltrate APE.

Episode #6: Lance of Arabia / The Doctor Goes APE
Lance and Mata set out to rescue an archaeologist who knows where CHUMP hides its gold. / Then they must steal back microfilm from CHUMP that contains photos of APE’s agents.

Episode #7: The Surfin’ Spy / The Missing Link
Lance poses as a lifeguard but his cover is blown. / Lance awaits his Uncle Mortimer, who seems to be missing.

Episode #8: Bonana / The Greatest Chase in the World
Lance and Mata go undercover at a dude ranch. / The agents then go on a race around the world to catch Baron and his cohorts.

Episode #12: The Dreaded Hong Kong Sneeze / The Great Bank Robbery
Baron plans to infect the world with an Asian virus. / Lance decides to steal money back from bank robbers.

Episode #13: The Sour Taste of Success / The Baron’s Birthday Ball
Lance discovers microfilm has been hidden in a lemon. / Lance unwittingly becomes part of a birthday present for Baron.

Episode #15: The Spy Who Went Out in the Cold / Too Many CHUMPs
Lance goes undercover as a defector to CHUMP. / Lance and Mata must stop a new wave of CHUMP agents being formed.