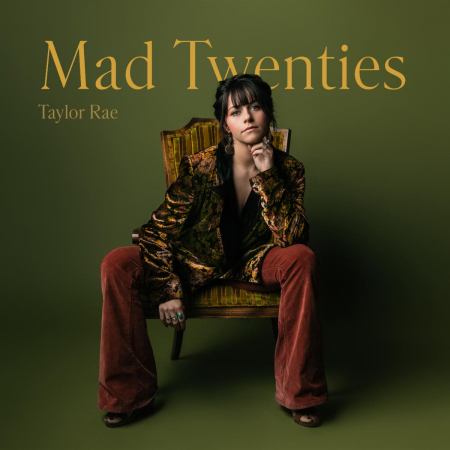 “This album is an accumulation of everything I’ve been through in my 20s so far. I’ve come to a place of eternal gratitude for each lesson and each moment during that time - the good and bad.” – Taylor
Nashville, TN (August 4, 2021) – MAD TWENTIES proves it’s impossible to pigeon-hole this California to Texas transplant – Taylor Rae is fearless in her exploration of musical genres and of the human condition. This openness to both creative and personal evolution has resulted in a captivating and commanding, 12-track debut album that brings a magical new voice to the masses. Emotionally raw, lyrically polished and delivered with pure vocal mastery, MAD TWENTIES and Taylor Rae make for compelling listening.
A largely chronological concept album, the project charts the progress of a romantic relationship. The disc opens with “Window,” a song inspired by a plant medicine psychedelic-experience – and then ably crosses boundaries and a range of emotions on its way to its closing ode: the raw, wake-up call of “Taking Space.” Overall, the disc shares the who, what, when, where and why of Taylor’s largely lived twenties. The B3-infused joyride (and new single) that is “Home on the Road,” reveals the Blues/Jazz influences of her youth while the dreamy “Fixer Upper” highlights a sweet Folk feel. Energy emanates from the rhythmic hypnotics of “Never Gonna Do” and Taylor ably brings a Rock opera presence to “Forgiveness.” While clearly intimate, MAD TWENTIES is neither self-indulgent, nor ego driven. After all, love and music are universal languages.
Album Track List
1.   Window
2.   Home on the Road
3.   Fixer Upper
4.   Sink or Swim
5.   Letting You Go
6.   Never Gonna Do
7.   5:25
8.   Just Be
9.   Something Familiar
10. Forgiveness
11. Wait and See
12. Taking Space
All Songs Written by Taylor Rae, © TaylorRaeMusic (ASCAP)
The new single from MAD TWENTIES, “Home on the Road” is based on Taylor’s memories of a long drive from California to Colorado in a 1979 step van. “It was hot, and the van kept overheating,” she recalls. “We had no money for repairs or a tow, and I remember sitting at a rest stop in our underwear, waiting on the van to cool off enough to drive the next 20 miles, drinking warm Heinekens and thinking that one day I’d write a song about the experience.” The track premiered on Americana Highways. Fans can pre-save “Home on the Road” now and radio can access via Airplay Direct.
Recorded at OmiSound Studios in Nashville, MAD TWENTIES was produced by William Gawley [Taylor Hicks (American Idol) Taylor McCall (BMG)] and engineered by Bryce Roberts (Old Crow Medicine Show, Willie Nelson, Merle Haggard). Taylor played acoustic guitar throughout and was joined by A-listers Dave Francis on bass (Maura O’Connell, Luke Combs), Wayne Killius on drums (Luke Bryan, Blake Shelton, Big & Rich), David Flint on guitar/mandolin (Highway 101) and Chris Nole on piano/keys (Faith Hill, The Oak Ridge Boys, Don Williams).

Powered by insightful, poetic and deeply personal lyrics, Taylor Rae’s music is propelled by a voice that, while wholly unique, could best be described as a sizzling folk, jazz and blues hybrid of Norah Jones and Grace Potter. The singer calls her musical style soul and roll: “It's not really soul music; it’s not really rock ‘n’ roll. It's a blend of all the roots genres that come from the earliest days of American music,” she explains.

Born in Santa Cruz and raised in nearby Ben Lomond, Taylor Rae Vencill’s eclectic musical journey took her first from California’s Central Coast to Los Angeles. Then, in 2018, she relocated to Austin, which, like her birthplace, offered the space and freedom to be true to herself both as an artist and an individual. Throughout her career she has remained nomadic, traveling countless miles to grace a plethora of stages from iconic Santa Cruz venues Moe’s Alley, Kuumbwa Jazz and the Catalyst, to Hollywood’s prestigious Hotel Cafe and the second stage at legendary Austin nightspot Stubb’s. Taylor has shared the stage with a variety of artists including Brandy Clark, The Stone Foxes, Kristian Bush and Reggae musician Mike Love. In 2017, Taylor won Santa Cruz NEXTies Award for Musician of the Year.

The natural surroundings of her youth have provided limitless inspiration for Taylor’s craft, as have myriad musical influences ranging from Bonnie Raitt and Carole King, to Simon & Garfunkel and Steely Dan, among others. Taylor wrote her first song at age 8, taught herself guitar at 12, and played her first paid gig by age 15.

With her debut album, Mad Twenties, Taylor delivers 12 original tracks exhibiting a sophistication and maturity beyond her years. Helmed by producer William Gawley, the musical styles run the gamut from acoustic folk to Led Zeppelin-tinged rock and roadhouse blues, while also incorporating jazz and psychedelic influences. A largely chronological concept album, Taylor’s incisive lyrics similarly cover a broad emotional landscape, with a blossoming – then withering – romance charted from start to finish in stunning confessional detail. The gently rolling opening cut, “Window,” inspired by a psychedelic experience, affords the first inviting glance into the real-life relationship on which the majority of songs are based, while the sweetly romantic first single, “Fixer Upper,” offers an optimistic view forward. The paths of touring musician and romantic partner converge in the grease-streaked blues of “Home on the Road.” Taylor’s vocal prowess for searing blues-rock is demonstrated in the electrifying “Forgiveness,” as well as in the raw, edgy and politically charged “Never Gonna Do.” Both represent a brief but compelling detour from the album’s autobiographical approach. “Taking Space,” a darkly bittersweet epilogue to the love story, closes out the collection.

“Recording the album was very cathartic; it reflects my own personal journey of self-actualization, awareness and growth,” admits Taylor, “now I look back on this experience with gratitude.”