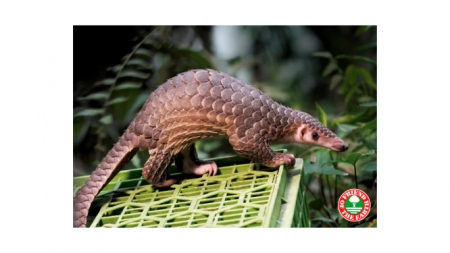 Special EARTH DAY Webinar “Pangolins: probable
origin of COVID-19 and most trafficked endangered
mammal” 22nd of April 2020
Dear Madam/Sir,
Friend of the Earth is pleased to invite you to the free of charge webinar on
“Pangolins: probable origin of COVID-19 and most trafficked endangered
mammal”
This webinar can be of interest to:
- media professionals, journalists
- environmental conservation groups, NGOs
- government officials
- pharmaceutical companies
- companies’ sustainability and environmental managers
- bloggers, influencers and many more.
During this half an hour session, Patrick Boehler (editor of The Pangolin
Reports) and Paolo Bray (Founder and Director at Friend of the Earth and
Friend of the Sea) will cover the following subjects:
Earth Day & Pangolins Pangolins’ Biology and distribution
Threats and IUCN Redlist status Illegal trade of pangolins
Claimed pharmaceutical proprieties of pangolins’ parts
Wet wildlife markets, coronavirus and pangolins
Conservation initiatives to protect pangolins.
Sign up to the webinar here
if this link doesn't work try
https://meetingdemo.zoho.com/meeting/register?sessionId=1022622844
This webinar will take place on 22nd of April 2020 at 03:00 pm, CET +1 (06:00
am San Francisco; 09:00 am in New York; 02:00 pm in London; 03:00 pm in
Johannesburg; 08:00 pm in Bangkok; 09:00 pm in Hong Kong; 23:00 pm in
Sidney).
Participation is free of charge.
Friend of the Earth certificate of attendance will be issued to all participants.
I f you cannot attend the live session, sign up anyway and we will send you a
recording.
You will also have the opportunity to pose questions to the speakers during the
webinar.
Please, feel free to share this email with any interested colleagues.
Best regards
Newma Mateus Barbosa - Marketing
friendoftheearth.org
Facebook Twitter Linkedin Youtube
FRIEND OF THE EARTH (www.friendoftheearth.org)
Friend of the Earth is a project of the World Sustainability Organization, providing certification of products
and services which respect the land habitat and species. Food products,textiles and fashion from
sustainable agriculture and farming can be certified Friend of the Earth, following audits to verify compliance
with strict sustainability requirements. Audits are carried out by qualified auditors of independent and
nationally accredited certification bodies. Over a thousand companies have products certified by WSO
certification programs in over 70 countries. Friend of the Earth also deploys its own conseervation projects
and campaigns to protect endangered species and habitats.

New Petition Asks Chinese and Vietnamese
Governments to Enforce Pangolin Trade Ban
Goal is to stop poaching almost-extinct scale-covered mammal used in traditional Chinese
medicine and prized as a food delicacy.
Friend of the Earth, the preeminent worldwide certification for agriculture and
land-based ecosystems, has initiated an online petition requesting that the
governments of China and Vietnam enforce a ban on the trade in pangolin parts.
The scale-covered mammal has been hunted nearly to the point of extinction to
feed a lucrative marketing trafficking in pangolin parts for use in traditional
Chinese medicine. Pangolin are also considered a delicacy in China and
Vietnam, the two countries that bear the most responsibility for the illegal global
trade in pangolin scales and meat.
“This harmless, ant-eating mammal is now endangered due to the black
market,” said Paolo Bray, Director of Friend of Earth “Unfortunately,
international legislation is not sufficient to protect the species because the laws
have not been enforced. This is, in part, due to a lack of political will and a lack
of funds. Local populations are also not aware or engaged in the drive to
conserve these unique animals. Our hope is that the petition will demonstrate a
worldwide interest in saving the pangolin, which will drive action on the parts of
the Chinese and Vietnamese governments.”
The Pangolin is believed to be the world’s most trafficked mammal. Poachers in
Africa are paid about $2 for each pangolin they catch. At the buying end of
the market, in China and Vietnam, a kilo of pangolin scales can sell for more
than $750, according to Pangolin Reports. The scales are falsely marketed as
having medicinal properties that can cure a variety of ailments.
The monetary incentive has led to innumerable pangolins being taken from the
wild. The IUCN SSC Specialist Pangolin Group estimates that, despite the
reduction in numbers over the past decades, a pangolin is illegally taken from
the wild every five minutes. Habitat loss is also affecting pangolin populations in
both Asia and Africa. The primary cause is deforestation.
Of the eight species of pangolin, four (Phataginus tetradactyla, P. tricuspis ,
Smutsia gigantea, and S. temminckii) are listed as vulnerable, two (Manis
crassicaudata and M. culionensis) are listed as endangered, and two (M.
pentadactyla and M. javanica) are listed as critically endangered on the
International Union for Conservation of Nature Red List of Threatened Species.
Pangolins have a highly specialized diet, relying on ants and termites for their
nutrition. Though they are not closely related to anteaters, pangolins occupy a
similar ecological niche to these animals. They are important for controlling
insect populations. According to research, a single pangolin can eat upwards of
70 million insects a year. As such, pangolins have an important role in the
control of forest termites and without them, the balance of their delicate
ecosystems will tip.
Friend of the Earth will send all signatures from the petition to the relevant
decision-makers in the Chinese and Vietnamese governments and companies.
The organization will subsequently ask for feedback and updates on the
undertaken measures.
About Friend of the Earth
Friend of the Earth promotes sustainable agriculture and farming methods
through companies' certification and consumer awareness. It is a project of the
World Sustainability Organization, whose objective is the conservation of
ecosystems.
For more information about Conservation Projects visit
https://friendoftheearth.org/conservation-project/save-the-pangolins/
For moreinformation about the Petition visit
https://chng.it/LdmXD75n4w
friendofthesea.org
Facebook Twitter Linkedin Youtube

Paolo Bray has been engaged for the last 30 years in protecting endangered species and in environmental conservation activities.

He is currently Director of International Programs – Dolphin-Safe® project / Earth Island Institute and Founder and Director of World Sustainability Organization and the Friend of the Sea® certification programme.

Over his almost 30 years of experience in conservation, Bray has helped start and develop several certification projects. The Dolphin-Safe project has been the pioneer of all certifications of products from sustainable fisheries. Dolphin-Safe helped save millions of dolphins from being killed by tuna fisheries deliberately targeting also dolphins.

In 2008, Bray created Friend of the Sea, currently the major international sustainability certification programme for seafood, aquaculture, Omega3, shipping, whale and dolphin-watching, and other products and services to act on potential impacts on the marine habitat. It is the only independent certification, nationally and CE accredited, covering both fisheries and aquaculture.

Paolo Bray studied at the International Sevenoaks School of Kent, UK, and graduated in International Politics at Bocconi Economics University of Milan. Bray lived and travelled all over the world and his international and pragmatic approach to sustainability, and his dedication to conservation projects, helped to establish organisations aimed to achieve important and tangible environmental protection results.

He is often invited as speaker at the major FAO meetings and other institutes conferences.