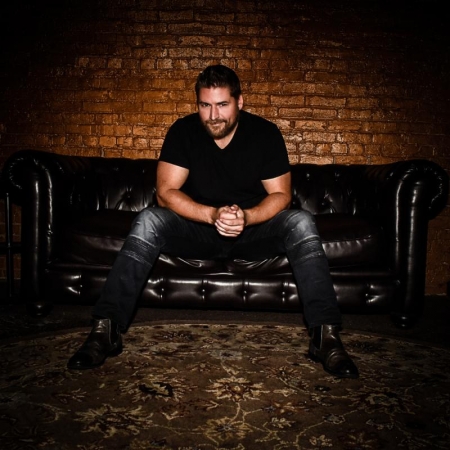 Event Raises Funds For New Nonprofit, #IAMNOTALONE
"A Good Time For A Great Cause"

Nashville, TN (November 6, 2018) - Singer/songwriter and philanthropist Jimmy Charles will lead a Cancer Survivors' March on Saturday, November 10, crossing the Cumberland River via Nashville's Pedestrian Bridge at 4 p.m. and on to The Anchor Fellowship (629 3rd Ave. South) for a pre-release album celebration for HARD WAY TO GO from 6 - 10 p.m. A fundraiser for the artist's new charity #IAMNOTALONE, the March is free and open to all cancer survivors and their supporters; admittance to the cocktail reception and Charles' performance at The Anchor requires a $50 donation per person.

All participants of the March will be filmed singing the chorus of Jimmy's "I Am Not Alone" for the upcoming companion video. The highly-acclaimed, award-winning firm of Saylors Brothers Entertainment, known for their work in television, film and music video formats (featured on/in MTV, BET, BBC, Hollywood Reporter, Variety, NY Times, Time Magazine and more), will shoot with drones and on-the-ground cameras.
All participants are asked to wear a t-shirt featuring the cancer organization of their choice OR a special #IAMNOTALONE t-shirt available for purchase HERE. Anyone who pre-orders a shirt can pick it up beginning at 3 p.m. in the Nissan Stadium Parking Lot "R." The lot has been reserved for the March and free parking is available from 3 p.m. to midnight on November 10. Filming will continue at the evening's performance, and attendees are asked to come and enjoy the great music, tasty food and have a good time for a great cause. "I'll be singing my new songs, as well as some fan favorites with my band," Jimmy notes. "That this all benefits #IAMNOTALONE is incredible, and I'd like to thank everyone who is marching, all of our helpers and all of our sponsors for their support."
Music is Jimmy's focus, but compassion and activism round out his world. A national ambassador and spokesman for ZERO Cancer since 2014, Jimmy is inspired by the cancer survivors he's met at the many Run/Walk events where he's performed, and by loved ones lost to the disease. "I've learned so much from them," he says. "Their stories might break my heart, but our journey together makes me whole."  The young singer/songwriter was named Outstanding Young Tennessean (2017). His music is available to radio via Play MPE and AirPlay Direct and fans can find "I Am Not Alone" on iTunes, Amazon and other popular e-tailers.
Stay social with Jimmy:
Website: https://www.jimmycharlesmusic.com/
FB:  https://www.facebook.com/jimmycharlesmusic
Twitter: www.twitter.com/jimmycharles92
Stay social with #IAMNOTALONE
FB: https://www.facebook.com/iamnotalonechallenge
Instagram: www.instagram.com/iamnotalonemovement
ABOUT JIMMY CHARLES
He's made a national name for himself with compelling original material and toured the country opening for Lady Antebellum, Montgomery Gentry, Kip Moore, Kacey Musgraves, Josh Turner, Merle Haggard and more since launching his music career in 2014. A Season 9 American Idol "Hollywood ticket" participant, he placed in the Top 50 of Nashville Star in 2013. The singer/songwriter found early success with his first single, "Whatever It Takes," and the power of his second release, "Superman" solidified his place in the spotlight. The single's companion video premiered on CMT, trending in the #1 spot for over a week, generating over 5,000 shares its first day on the site. His third single, "Bout Summertime" showcased his more adventurous and carefree side, landed him on the MusicRow Chart and set the stage for "I Am Not Alone." A native of Ocean City, Maryland, Jimmy graduated from Towson University. He played football and baseball, loves to fish, work out, play golf, and spend time at the beach. When he's not on the road touring, he enjoys playing with his bulldog Hank.
ABOUT #IAMNOTALONE
A 501(c)(3) national nonprofit that focuses on the cancer patient and their mental well-being, as well as finding a cure for the disease. The contract is a key part of the movement and involves the patient signing a contract with family and friends. This action creates a special moment between the survivor and their loved ones, allowing them to share their feelings, show their love and promise to always be there for each other.
#  #  #
Read 560 times
Published in News
Tagged under

We have 831 guests and no members online