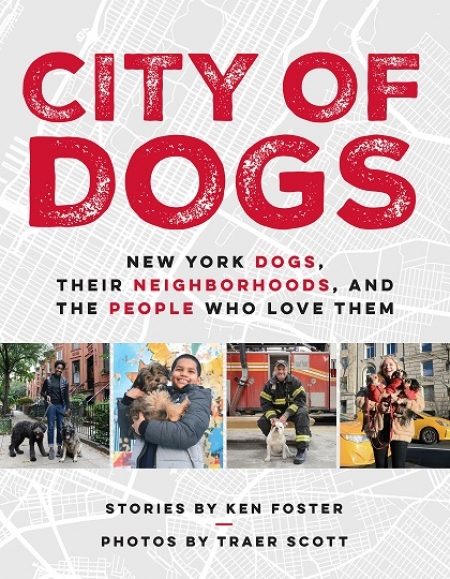 CITY OF DOGS combines moving stories with candid
images to reveal the multifaceted relationships canine
New Yorkers have with their human counterparts.
Enlivened with striking photography, this book pays
tribute to the five boroughs and the dogs who fill them
with loyalty, love, and open-heartedness.
As joyful equalizers, dogs cut through boundaries of social
class and bring people together. Encapsulating the
character of New York and its neighborhoods, Foster and
Scott capture a wide range, including:
• Famous writer and Brooklynite
Jacqueline Woodson, whose
beloved Toffee taught her how to slow down, while her puppy, Shadow,
keeps her active.
• The dogs of Homeland Security at JFK airport in Queens, who maintain
the safety of hundreds of thousands of people traveling each day.
• The Moschellas from Staten Island, who learned to embrace surprise
with the arrival of their triplet children and two dogs.
• Will from the East Village and his corgi, Hobbes, who has taught
him unconditional love and motivates him to spend nights improving
himself professionally with online classes.
• Alex from the Bronx, who owes his sense of purpose to his pit bulls,
Luci and Max.

This perfect holiday gift book uncovers 80 dogs’ different personalities—from the
showboaters to the shy—and the owners who adore them. Bestselling writer Ken Foster and
renowned photographer Traer Scott illustrate the marvelous effect these dogs have on
their urban kingdom.
Ken Foster is the author of several books on dogs, including: The Dogs Who Found Me;
the New York Times bestseller Dogs I Have Met: And the People They Found; and the
national bestseller I'm a Good Dog: Pit Bulls, America's
Most Beautiful (and Misunderstood) Pet. His writing has
appeared in McSweeney's, The Believer, the San Francisco
Chronicle, Bomb, Fence, and Bark.
Traer Scott is an award-winning photographer and
author of ten books, including the bestseller Shelter Dogs
as well as Nocturne: Creatures of the Night, Finding Home:
Shelter Dogs and Their Stories and the forthcoming
Radiant: Farm Animals Up Close and Personal. Her work
is exhibited around the world and has been featured in
National Geographic, Life, Vogue, People, and O: The
Oprah Magazine, and on The New York Times’s Lens blog.
Avery, an imprint focusing on health, wellness,
cookbooks, fitness, psychology, and popular science, is
best known for publishing cutting-edge, but accessible
books from the top experts in their fields. Founded in 1976, Avery quickly established itself as the most
successful independent publisher of health books in
the market. Penguin Group (USA) acquired it as an
imprint in 1999 with a strong commitment to continue
publishing respected, up-to-the-minute books with a clear
focus on helping people make the most of their lives.
The Penguin Group (penguin.com) is a Penguin Random
House Company.

More in this category: « Get ready for the next Westminster Kennel Club Dog Show at Madison Square Garden Buy Your Tickets Now! The IX Loro Parque Foundation Parrot Congress, a resounding success »
back to top

We have 495 guests and no members online