Summer of Red, White and MOO! Nat Geo WILD’s No. 1 Series The Incredible Dr. Pol Returns With a New Season This July Featured 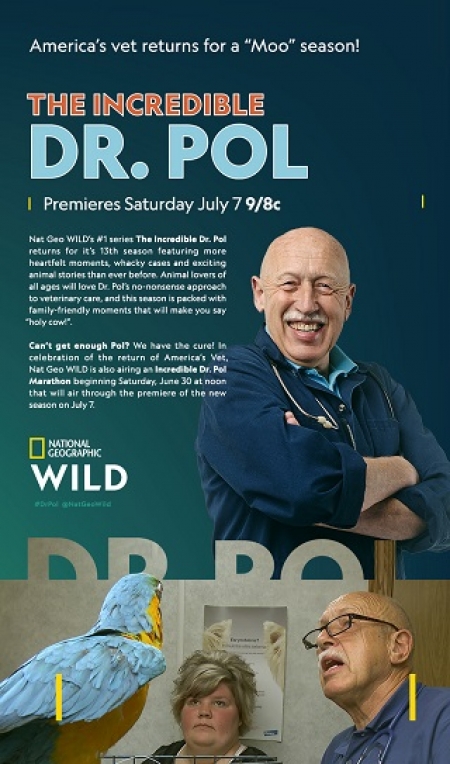 Summer of Red, White and MOO!

Nat Geo WILD’s No. 1 Series The Incredible Dr. Pol Returns With a New Season This July

(WASHINGTON, D.C. – May 30, 2018) Nat Geo WILD’s No. 1 series returns with an all new season of even more prolapses, pregnancy exams and problematic cases than ever before. There isn’t much that 76-year-old veterinarian Dr. Jan Pol, who the LA Times called “the no-nonsense, Dutch American doctor who can fashion a goat’s leg splint out of parts from an old apple barrel,” hasn’t seen or done in a half-century of practicing animal medicine, but every day presents new surprises as he and his staff at Pol Veterinary Services wrangle animals and tackle tricky cases at their clinic in rural Michigan. With some surprising cases, heart-warming moments and dramatic situations, this season of The Incredible Dr. Pol is sure to be a wild ride.

After 12 seasons, The Incredible Dr. Pol remains Nat Geo WILD’s No. 1 series and continues to break ratings records for the network. In its Saturday 9 p.m. ET time slot, season 12 of The Incredible Dr. Pol ranks in the top three most watched shows on ad-supported cable among P2+ with an average of 1.43 MM viewers so far (P2+, L+7), a 2 percent increase from its prior summer season. The series has been at or near 1.4 million viewers since season seven (2015) with a loyal fan base, driving the highest time shifted viewing on Nat Geo WILD and the most engaged (longest time spent viewing). Among all networks under 70MM homes, Dr. Pol was the No. 1 series in 2017. Among networks under 80MM, it was the No. 1 unscripted and No. 6 series overall in 2017.

It’s a healthy dose of cows, bow-wows and vows this week in central Michigan! A dehydrated dachshund receives intensive care at Pol Veterinary Services, while a horse with colic calls Dr. Emily 30 miles from the clinic. As Dr. Brenda helps a cow that can’t get back on her feet, Charles is orchestrating his biggest surprise yet for his parents’ 50th wedding anniversary.

This week on The Incredible Dr. Pol, there is trauma, drama and a piglet in peril that needs the entire clinic staff to join forces to save his life. The piglet, named Winston, is rushed into the clinic after his owners become worried about his sudden decline in health. Dr. Emily worries it’s tetanus, which is usually lethal in small animals like Winston. This becomes an all-hands-on-deck situation as the vets join together to help Winston pull through. Meanwhile, the clinic is busy with an array of interesting cases from bloated calves to cats with grubs and even an injured emu.

The Incredible Dr. Pol: May the Horse Be With You

It’s another whirlwind weekend as Dr. Pol, Dr. Brenda and Dr. Emily encounter everything from constipated cats to gassy horses — and even a surprise proposal! While Dr. Brenda deals with a constipated cat named Tom, Dr. Emily helps a horse with a bad case of gas. Meanwhile at the clinic, Dr. Pol trims a Shetland ram’s overgrown horns, giving the animal a chance at many more healthy years. The week ends with news of another addition to the Pol family. While vacationing in England, Charles surprises his girlfriend, Beth, by asking her to marry him! Once they return to the clinic, the newly engaged couple show off the bling to Doc and Diane. Looks like the Pol clan will have another case to work on: planning a wedding!

The Incredible Dr. Pol: Doc Got Run Over by a Reindeer

As the leaves change during autumn in Michigan, the crew at Pol Veterinary Services are falling into the same busy routine! An afterhours emergency has Dr. Pol on his toes when a case involving a baby reindeer turns into a three-day dilemma. Meanwhile, Dr. Emily must handle an emergency of her own when Bella the bulldog appears to be choking. And Christmas comes early for Dr. Brenda when she is tasked with a herd of Santa Clauses and their reindeer.

The Incredible Dr. Pol: New Cats on the Block

The staff at Pol Veterinary Services are seeing everything from poisoned puppies and sassy cats, to a visit from an old friend who needs some help, while Tater, the clinic cat, gets an adventure of his own. Dr. Emily treats a puppy that has been acting strange after eating a mysterious mushroom. Meanwhile, Dr. Brenda gets a visit from a patient with an elderly cat who hasn’t been behaving normally. Dr. Brenda notices the elderly cat seems lethargic, so she does some tests to figure out what’s wrong. In the midst of the craziness, the clinic’s three-legged cat mascot, Tater Pol, isn’t too happy with the two new cats that have moved in next door.

Summer is on its way out the door, but that doesn’t stop the clients of Pol Veterinary Services from rushing in! A busy week at the clinic has everyone from the clinic staffers to their furry friends seeking some R&R. Dr. Pol takes the weekend to trade in his stethoscope for a fishing pole as he and Diane take a mini-vacation out on the open water!

Sit! Stay! You're in for a barking good time this week on The Incredible Dr. Pol! From cut tails, to close calls, quill pulling and knee popping, the docs at Pol Veterinary Services are paws-itively pumped to help injured pooches. A pit bull comes in with a face of quills, a mutt named Murphy has a tail injury, and it’s an afterhours emergency when a client rushes in with her wounded pup, Sunshine, who was attacked by two dogs. Dr. Emily is up for the challenge and suits up to work on Sunshine’s gruesome bite wounds. Will Sunshine recover in time to celebrate his first birthday?

National Geographic Partners LLC (NGP), a joint venture between National Geographic and 21st Century Fox, is committed to bringing the world premium science, adventure and exploration content across an unrivaled portfolio of media assets. NGP combines the global National Geographic television channels (National Geographic Channel, Nat Geo WILD, Nat Geo MUNDO, Nat Geo PEOPLE) with National Geographic’s media and consumer-oriented assets, including National Geographic magazines; National Geographic studios; related digital and social media platforms; books; maps; children’s media; and ancillary activities that include travel, global experiences and events, archival sales, licensing and e-commerce businesses. Furthering knowledge and understanding of our world has been the core purpose of National Geographic for 130 years, and now we are committed to going deeper, pushing boundaries, going further for our consumers … and reaching millions of people around the world in 172 countries and 43 languages every month as we do it. NGP returns 27 percent of our proceeds to the nonprofit National Geographic Society to fund work in the areas of science, exploration, conservation and education. For more information visit natgeotv.com or nationalgeographic.com, or find us on Facebook,Twitter,Instagram,YouTube,LinkedIn and Pinterest.

More in this category: « Experience the Magic of Disney’s Beloved Flight of Fantasy: “Peter Pan” Soars Into the Walt Disney Signature Collection and you can win from Disney the Peter Pan DVD and figurine this Saturday 7/7/2018 on Talkin' Pets 5-8pm EST Listen to Talkin' Pets this Saturday 5-8pm EST and get a chance to win ANT-MAN & the WASP gift set from Marvel Studios »
back to top