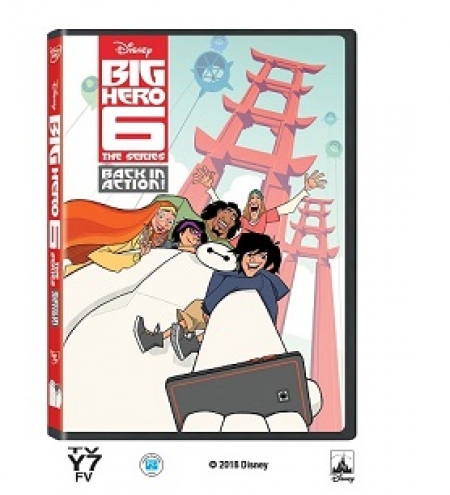 Tech Genius Hiro and His Lovable, Huggable Robot Pal Baymax
Are Back for More Adventures!

BIG HERO 6 THE SERIES – BACK IN ACTION!

Synopsis:                      The adventures continue for tech genius Hiro Hamada and his healthcare companion, the lovable, inflatable Baymax! Picking up right before the end of the film, Hiro thinks Baymax is lost forever, until he finds the chip Tadashi designed to create Baymax. Hiro immediately gets to work rebuilding Baymax, but Hiro’s overconfidence and impatience get him into trouble. The stakes are raised for Hiro, Baymax and their friends – adrenaline junkie Go Go, control freak Wasabi, chem whiz Honey Lemon and fanboy Fred – as they fight to protect San Fransokyo as the legendary superhero team Big Hero 6.

More in this category: « A 4th of July message from my dear friend Linda Blair Experience the Magic of Disney’s Beloved Flight of Fantasy: “Peter Pan” Soars Into the Walt Disney Signature Collection and you can win from Disney the Peter Pan DVD and figurine this Saturday 7/7/2018 on Talkin' Pets 5-8pm EST »
back to top

We have 1011 guests and no members online