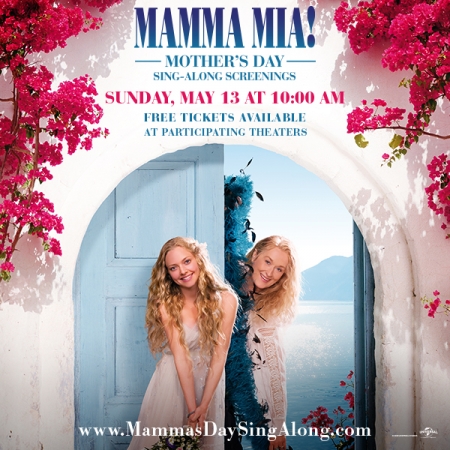 Offer Valid in 25 Theaters Across North America on Sunday, May 13

Guests of 10:00 A.M. Screenings of the Beloved Musical Comedy Will Be Among the First to Experience Exclusive New Footage from Mamma Mia! Here We Go Again

Universal City, CA, May 9, 2018—In anticipation of its upcoming Mamma Mia! Here We Go Again, Universal Pictures today announced that free sing-along screenings of the blockbuster musical comedy Mamma Mia! will be available on Mother’s Day, Sunday, May 13, at 25 theater locations across the U.S. and Canada.  Each guest who requests a ticket the day of the screening—at a participating location—will be given one free admission to the 10:00 a.m. showing, up to theater capacity.

Free tickets will be available on a first-come, first-served basis and may only be picked up at the theater box office starting at 9:00 a.m. on Sunday, May 13.  This offer is valid for the 10:00 a.m. showing of Mamma Mia! The Movie on May 13, at participating locations only.

“Since its debut as a smash-hit stage musical and evolution into a beloved feature-film adaptation, Mamma Mia! The Movie has brought joy to worldwide audiences,” said Jim Orr, President, Distribution, Universal Pictures.  “As the movie is an unabashed celebration of mothers and daughters, we felt that Mother’s Day is the perfect holiday to invite audiences back into the theater to experience the sing-along version…and to share exclusive footage of Mamma Mia! Here We Go Again.”

Meryl Streep leads an all-star cast in the feature-film adaptation of the beloved musical that has been seen by more than 30 million people in 170 cities and 8 languages around the world.  Bringing the timeless lyrics and melodies of iconic super group ABBA to movie audiences, Mamma Mia! originally opened in theaters on July 18, 2008.

An independent, single mother who owns a small hotel on an idyllic Greek island, Donna (Streep) is about to let go of Sophie (Amanda Seyfried), the spirited daughter she’s raised alone.  For Sophie’s wedding, Donna has invited her two lifelong best girlfriends—practical and no-nonsense Rosie (Julie Walters) and wealthy, multi-divorcee Tanya (Christine Baranski)—from her one-time backing band, Donna and the Dynamos.  But Sophie has secretly invited three guests of her own.

On a quest to find the identity of her father to walk her down the aisle, she brings back three men from Donna’s past to the Mediterranean paradise they visited 20 years earlier.  Over 24 chaotic, magical hours, new love will bloom and old romances will be rekindled on this lush island full of possibilities.

Inspired by the storytelling magic of ABBA’s songs from “Dancing Queen” and “S.O.S.” to “Money, Money, Money” and “Take a Chance on Me,” Mamma Mia! is a celebration of mothers and daughters, old friends and new family found.

Get ready to sing and dance, laugh and love all over again.

Ten years after Mamma Mia! The Movie grossed more than $600 million around the world, you are invited to return to the magical Greek island of Kalokairi in an all-new original musical based on the songs of ABBA.  With the film’s original cast returning and new additions including Lily James (Cinderella, Baby Driver), the musical comedy will open on July 20, 2018.

Mamma Mia! Here We Go Again is produced by Judy Craymer and Gary Goetzman, producers of the original film.  Craymer is also the creator and producer of the worldwide smash-hit stage musical.

As the film goes back and forth in time to show how relationships forged in the past resonate in the present, James will play the role of Young Donna.  Filling the roles of Young Rosie and Young Tanya are Alexa Davies (A Brilliant Young Mind) and Jessica Keenan Wynn (Broadway’s Beautiful).  Young Sam will be played by Jeremy Irvine (War Horse), while Young Bill is Josh Dylan (Allied) and Young Harry is Hugh Skinner (Kill Your Friends).  www.MammaMiaMovie.com