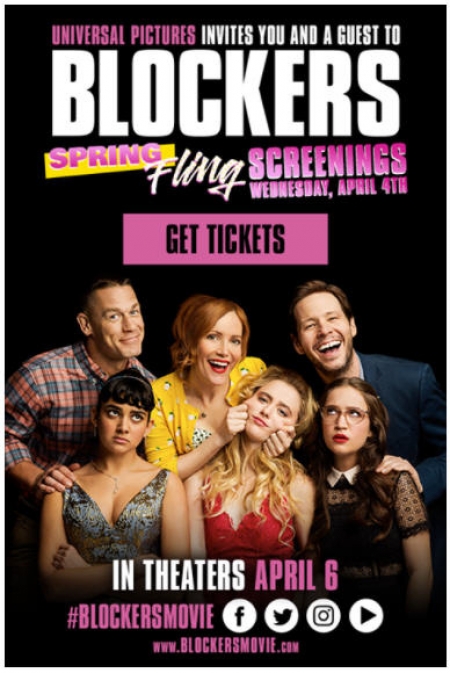 Offer Valid at 100 Theaters in 50 Cities Across the U.S. on Wednesday, April 4

Guests of 7:00 P.M. Screenings of the Comedy Will Be Among the First to Experience the South-by-Southwest Sensation

Universal City, CA, March 29, 2018—Universal Pictures, director Kay Cannon and the cast of Blockers, today announced that free “Spring-Fling” screenings of the new comedy will be offered on Wednesday, April 4, at 100 theater locations across 50 cities in the U.S. Guests who go to www.BlockersSpringFling.com and RSVP for a ticket—at participating locations—will be given one free admission to the 7:00 p.m. showing, up to theater capacity.

Free tickets will be available on a first-come, first-served basis and may only be claimed at www.BlockersSpringFling.com. Each guest must present a printed ticket and show a valid ID to receive admission. This offer is valid for the 7:00 p.m. showing of the film on April 4, at participating locations only.

“Ever since our first screening at South-by-Southwest we have been overwhelmed at how audiences have embraced the film,” said Cannon. “In keeping with the spirit of the story and how gratified we are by the response, Universal is spearheading a series of free “Spring-Fling” screenings. On behalf of our entire cast and crew, we hope everyone will love watching this film as much as we loved making it.”

For more information and a list of theaters offering the special screenings, please visit www.BlockersSpringFling.com.

When three parents discover their daughters’ pact to lose their virginity at prom, they launch a covert on-night operation to stop the teens from sealing the deal. Leslie Mann (The Other Woman, This Is 40), Ike Barinholtz (Neighbors, Suicide Squad) and John Cena (Trainwreck, Sisters) star in Blockers, the directorial debut of Kay Cannon (writer of the Pitch Perfect series).

We have 529 guests and no members online