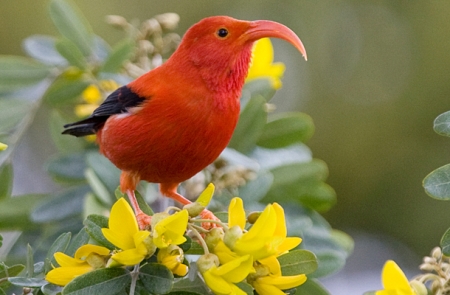 (Washington, D.C., March 22, 2018) The $1.3 trillion spending agreement reached by Congress this week contains good news for birds and bird conservation. Legislators increased funding for State of the Birds activities to $3 million, giving a boost to the conservation of endangered forest birds in Hawaii, including the creation of safe nesting areas. Congress also indicated that funding levels for work to support migratory bird conservation will remain at or be set above 2017 levels.

"This agreement boosts funding for critically endangered birds in Hawaii and supports programs essential to migratory bird conservation," said Steve Holmer, Vice President of Policy for American Bird Conservancy. “Our thanks to Senators Brian Schatz (D-HI) and Mazie Hirono (D-HI), and to Representatives Colleen Hanabusa (D-HI) and Tulsi Gabbard (D-HI), for their support and leadership to restore State of the Birds funding.”

Greater Sage-Grouse will continue to receive $60 million in conservation funding. However, the species is still exempted from listing under the Endangered Species Act in the new budget agreement — at a time when this iconic species is at greater risk than ever.

"The agreement leaves the Greater Sage-Grouse in peril by eliminating the safety net of the Endangered Species Act,” Holmer said. “Given the renewed threat to priority sagebrush habitat from oil leasing, this rider should be eliminated.”

Forest habitat conservation will see some positive gains under the spending bill. It includes a “fire funding fix” for the U.S. Forest Service, which will prevent over-budget fire-suppression efforts from being funded at the expense of other agencies’ conservation projects.

It also includes an extension of the Secure Rural Schools program that supports sustainable forest management in Northern Spotted Owl habitat, as well as rural development and restoration. However, the bill also features provisions weakening the protection of endangered species in federal forests by allowing development projects to proceed without review by the U.S. Fish and Wildlife Service.