Listen on your favorite radio station, Watch on Facebook Live @talkinpetsradio, Call & Win, Talkin' Pets this Saturday 3/3/18 between the hours of 5-8pm EST when you hear the song "He's A Tramp" and win from Walt Disney Pictures the gift box pictured Featured 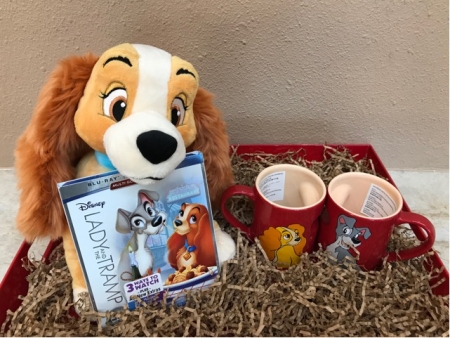 BURBANK, Calif. (Jan. 4, 2018) — This February, Disney’s cherished animated classic, “Lady and the Tramp,” joins the highly celebrated Walt Disney Signature Collection. Every member of the family will treasure this timeless tale—loaded with three versions of the film, classic bonus material and three all-new features—when it heads home on Digital and on Movies Anywhere Feb. 20 and on Blu-ray on Feb. 27.

As one of the greatest love stories ever told, “Lady and the Tramp” is sure to melt the hearts of generations with its beloved characters, brilliant animation, memorable music and sweet sentiment. The animated treasure tells the story of Lady, a lovingly pampered cocker spaniel, and Tramp, a freewheeling mutt with a heart of gold. Through the Signature Collection edition, viewers can relive the pair’s thrilling adventures, sing along with the film’s unforgettable songs like “Bella Notte,” and swoon over one of the most memorable movie moments of all time—the iconic scene in which Lady and Tramp share a plate of spaghetti and an accidental kiss.

“Lady and the Tramp” is the sixth title to join the Walt Disney Signature Collection, which includes groundbreaking films created or inspired by the imagination and legacy of Walt Disney, featuring timeless stories and characters that have touched generations. The film takes its place alongside “Snow White and the Seven Dwarfs,” “Beauty and the Beast,” “Pinocchio,” “Bambi” and “The Lion King.”

Classic Bonus Features on Digital Only*

ABOUT THE WALT DISNEY SIGNATURE COLLECTION:

The Walt Disney Signature Collection includes groundbreaking films created or inspired by the imagination and legacy of Walt Disney, featuring timeless stories and characters that have touched generations. Each release will offer special features for every member of your family plus a unique digital experience. To date, the collection includes “Snow White and the Seven Dwarfs,” “Beauty and the Beast,” “Pinocchio,” “Bambi” and “The Lion King.”

For over 90 years, The Walt Disney Studios has been the foundation on which The Walt Disney Company was built. Today, the Studio brings quality movies, music and stage plays to consumers throughout the world. Feature films are released under the following banners: Disney, including Walt Disney Animation Studios and Pixar Animation Studios; Disneynature; Marvel Studios; Lucasfilm; and Touchstone Pictures. The Disney Music Group encompasses the Walt Disney Records and Hollywood Records labels, as well as Disney Music Publishing. The Disney Theatrical Group produces and licenses live events, including Disney on Broadway, Disney On Ice and Disney Live!.

More in this category: « The Florida Aquarium’s coral reproduction success featured at World Aquaculture Society Conference Anne Wheaton author of Piggy and Pug will join Jon and Talkin' Pets 3/10/18 at 630pm EST to discuss and give away her new book »
back to top

We have 749 guests and no members online