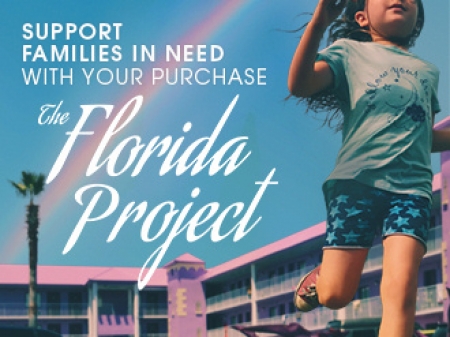 A24 will donate 5% of proceeds from first week digital sales of Sean Baker’s award-winning film The Florida Project to the Community Hope Center, an organization that assists families that are either homeless or living in motels along Osceola County's Highway 192 corridor, where the film was shot.

The Community Hope Center’s primary emphasis is serving the homeless and those living in motels and hotels. Through programs designed to restore dignity and self-sufficiency to those in need in Central Florida, the Center uses a holistic approach to case management, funds assistance, and life skills. The program—a collaborative effort between local churches, social service agencies, Osceola County, the city governments, and community businesses—is intended to provide gap services that other agencies are not currently providing. Find more information at http://hope192.com/

Set on a stretch of highway just outside the imagined utopia of Disney World, The Florida Project follows six-year-old Moonee and her rag-tag gang of friends. Moonee and her rebellious mother Halley live week to week at “The Magic Castle,” a budget motel managed by Bobby (Willem Dafoe), whose stern exterior hides a deep reservoir of kindness and compassion. With The Florida Project, Sean Baker gives life and a voice to a community rarely seen on screen. Through the eyesof Moonee, Halley, and Bobby, Baker has created a spellbinding and transformative portrait of contemporary lives lived in the margins. The Florida Project declares, boldly and proudly, that anywhere can be a Magic Kingdom—it just depends on how you see it.

Willem Dafoe’s performance in The Florida Project has been called a “career best” and earned him an Academy Award nomination for Best Supporting Actor. The Florida Project appeared on over 200 Top 10 lists and was named the Best Film of the Year by The New York Times.

The title is now exclusively available to own in digital HD before it is released on DVD and      Blu­‑ray. Buy the film between 1/30 and 2/5 on iTunes, Amazon, Google, Xbox, Playstation, Vudu, Fandango, Comcast, and Verizon to help support families in need.

More in this category: « Lora Dunn, Director of the Criminal Justice Program for the ALDF will join Jon and Talkin' Pets tp dicuss the Best and Worst States in Animal Protection Candace Fleming and Eric Rohmann author and illustrator of Strongheart: Wonder Dog ot the Silver Screen will join Jon and Talkin' Pets 2/10/18 at 630pm EST to discuss and giveaway their book »
back to top

We have 383 guests and no members online