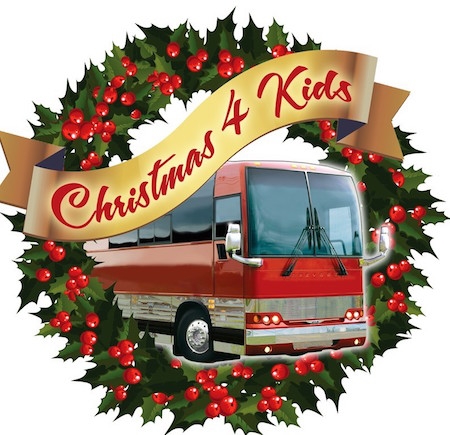 All proceeds go to the nonprofit organization, Christmas 4 Kids, that will supply Christmas shopping money to more than four hundred underprivileged children at the annual event. Dozens of artist buses are decorated with Christmas themes, providing an opportunity for fans to get an inside look at the artists’ home away from home. A donation of $5 for adults and $2 for children ages 2-12 gives the ticket-holder the chance to see more than 50 tour buses and meet artists and celebrities inside every bus, take photographs and get autographs.

Lewis Brice: With a sound rooted at the intersection of country, rhythm & blues and southern rock, Lewis Brice comes at you with high-energy stories, sounds that catch the ear and beats that make you want to move. Born and raised in Sumter, South Carolina, he grew up singing in church choir and praise bands. Throughout his career he has spread his music in front of attentive audiences and continuously grown a strong fan base while playing shows with many talented artists he admires such as Lee Brice, Randy Houser, Jerrod Niemann, The Cadillac Three, Dierks Bentley and many more.

Lewis made headlines with 2010's “Ordinary Girl,” co-written with Dallas Rogers, which made a small window on the Mediabase charts and reached #67 on the iTunes Country Music chart. He appeared in CMT’s first season of "Can You Duet,” coming in 8th place out of the thousands who auditioned. Additionally, Lewis took on the lead role in the 2014 ACM Song of the Year music video for “I Drive Your Truck,” performed by his brother Lee Brice.
For more information, please visit lewisbrice.com.

Paul Bogart: Though his songs are fresh and he himself is young, he is an old soul with a knack for capturing time-honored traditions and summing up classic sentiments in catchy, three-minute songs. Exuding sincerity and a rare, down-to-earth charm, Paul Bogart is, simply put, the epitome of traditional country music. After nearly a decade of writing, playing and touring, Bogart has begun pulling in big numbers in every arena, literally. Whether it’s the main stage at the AQHA World Championships with thousands in attendance or the social media scene with almost 4 million fans reached through his YouTube tribute, “Cowboy Ride,” Bogart’s songs have connected with America’s Heartland in a real, tangible way that modern country has perhaps missed. For more information on Paul Bogart visit www.paulbogart.com.

Scooter Brown Band: After 4 years and 3 months, 2 tours overseas with 1 tour of combat in Iraq as a United States Marine, Scott “Scooter” Brown traded his guns in for guitars and hit the road. The Scooter Brown Band was formed and began playing mainly in and around Houston, Texas. Along with their growing notoriety came their first radio single "Apology." Other regional radio releases were soon to follow and include "Whiskey Talkin", "Soldiers Christmas Eve", "Feels Like Home,", and "Summer Song". The band released several independent albums, strengthening their chops in the studio, however they truly shine in their live show. SBB has toured the country and opened for some of their biggest influences including Charlie Daniels Band, Travis Tritt and the Marshall Tucker Band, just to name a few. For the last year the band has been building a new era in their career, gearing up for the release of their newest project American Son -- defining modern southern rock. For more information, please visit scooterbrownband.com.

Amanda Winter: From a very early age, Amanda Winter has been wowing audiences with her small size and larger-than-life vocals. Her life growing up revolved around country music.  Amanda Winter is no stranger to the uncertainty that life can bring, growing up in the foster care system, her main focus remained on her love of music. She made her move to Nashville in August of 2013, without knowing anyone, without a job out there waiting and with nothing more than everything that fit inside of her car. In May of 2015, Amanda released her very first Nashville EP, consisting of seven original songs, two of which she co-wrote.  Her first self-penned song “Little Girl…Big Dream” became an anthem for her life. A song to tell the world that no one can define you, if you really chase after your dreams, anything is possible. Growing up herself as a foster child, she continues to be an activist for children everywhere, and hopes to be living proof that it doesn’t matter where you come from, that you can achieve it all if you work hard and dream big. Make sure to follow Amanda on http://www.amandawintermusic.com

About 117 Entertainment Group
117 Entertainment Group is a multi-faceted entertainment firm specializing in management and publicity/marketing campaigns for musicians, events and brands. They represent the likes of Randy Travis, Jerry Lee Lewis, Chuck Negron, Bobby Bare, Lewis Brice, Lee Roy Parnell Paul Bogart and Scooter Brown Band, just to name a few. Zach Farnum has managed PR campaigns for an eclectic list of artists as well as high-profile events and festivals including A Heroes and Friends Tribute to Randy Travis, Charlie Daniels’ Volunteer Jam, Country Stampede, Tree Town Music Festival and more. He serves as a co-chair of the TJ Martell Foundation’s Young Professionals Council and was recently appointed to the board of directors for the Nashville Association of Talent Directors where he serves as Membership Chairman. Bev Moser has worked with country artists, television actors and celebrities, as well as book authors creating articles and reviews, conducting interviews and covering an endless stream of festivals and press conferences. Together at 117, the team brings a brand-driven approach to management, publicity and marketing campaigns and continues to be a go-to firm for multiple high-profile projects.

More in this category: « The Florida Aquarium and a London museum team up to advance coral restoration by spawning corals in a lab setting Linda Blair asks for emergency donations due to southern California fires »
back to top

We have 494 guests and no members online