BETHESDA, Md., USA – Oct. 13, 2017 – Alley Cat Allies will celebrate the international premiere of Global Cat Day on Oct. 16, 2017, as a day for people around the world to stand up for policies that protect all cats in their communities. Participants are signing a pledge on GlobalCatDay.org to support advocacy efforts for all cats, including the cats who call the outdoors their home. 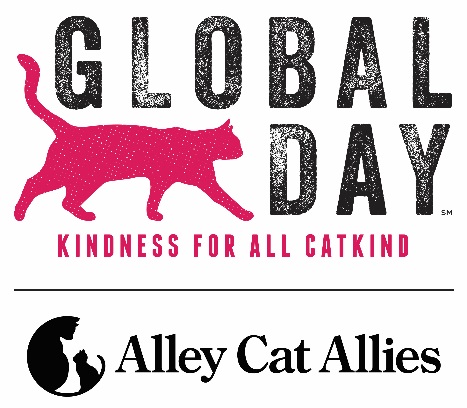 With the campaign already racing toward a goal of 100,000 people taking the pledge by year’s end, Alley Cat Allies president and founder Becky Robinson explained that the lasting impact of Global Cat Day will be a powerful message about protecting cats who live outside.

“Too often, local policies lead to cats being taken from the only home they’ve ever known – the outdoors,” Robinson said. “Community cats are no different from raccoons, otters or deer in that they are self-reliant animals who are totally comfortable outside with no need for human companionship. Global Cat Day is a turning point in helping more people to understand these essential facts about the cats living outside in their communities.”

“I pledge to be an ally to cats, including those who call the outdoors their home. I will advocate for compassionate policies that protect every cat in my community.”

Global Cat Day has evolved from National Feral Cat Day®, which Alley Cat Allies created on its 10th anniversary in 2001 to raise awareness about community cats, promote Trap-Neuter-Return (TNR), and recognize the millions of compassionate Americans who care for them. Because compassion knows no borders, international participation in National Feral Cat Day grew each year, reaching at least 20 countries with last year’s edition. That mark has already been eclipsed this year, with engagement for the inaugural Global Cat Day coming from more than 40 countries, from Australia to the United Kingdom, Belgium to Brazil, Saudi Arabia to South Africa and many more.

“It’s very exciting that interest in advocating for outdoor cats is coming from so many corners of the globe, because it’s more evidence that this is now truly an international movement,” Robinson added.

Follow all the excitement for Global Cat Day on social media with the #GlobalCatDay hashtag.

Alley Cat Allies, headquartered in Bethesda, Md., is the global engine of change for cats. We protect and improve cats’ lives through our innovative, cutting-edge programs. We are seen around the world as a champion for the humane treatment of all cats. Founded in 1990, today Alley Cat Allies has more than 650,000 supporters and helps tens of thousands of individuals, communities and organizations save and improve the lives of millions of cats and kittens worldwide. Its website is www.alleycat.org, and Alley Cat Allies is on Facebook, Twitter, Instagram, Google+ and YouTube.

More in this category: « China’s Beijing Qiaonyu Foundation Forges Historic Partnership with Panthera and WildCRU to Protect Big Cats and Their Landscapes Critically Endangered Pan’s Box Turtles Hatch at Turtle Conservancy - Zoos May be the Last Hope for the Turtles of China »
back to top

We have 793 guests and no members online