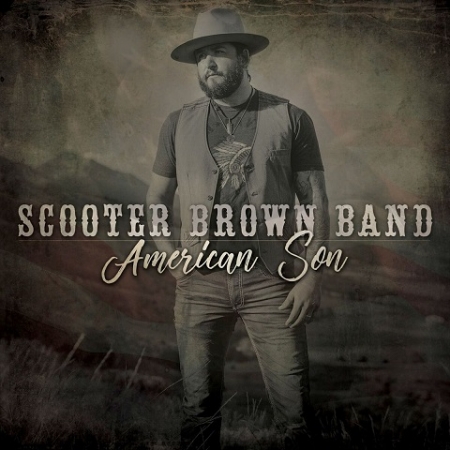 NASHVILLE, Tenn. (August 16, 2017) – Scooter Brown Band announced that they will release their first-ever nationally distributed album, American Son. The project will is being released by Red River / BFD  / Sony Orchard on Friday, September 8 and is now available for presale at www.scooterbrownband.com.

“This album sets the tone for what fans can expect from us on the road and on their radios. True country and southern rock music, what we were born and raised on,” said lead singer Scooter Brown.

The title track, “American Son,” features none other than one of America’s truest sons, Charlie Daniels, a southern rock and country icon that Scooter Brown has looked up to his entire life and sought advice from often in recent years. The Country Music Hall of Famer contributes his gritty southern drawl to the track like only he can, driving it home as one of the most anticipated songs on the album.  Nashville Country Club debuted the track earlier this week calling it “a gritty unapologetic track that has a rockin’ musical arrangement for the band’s Southern Rock appeal.” Fans can listen to the single on Spotify and Apple Music and purchase it on iTunes or Amazon.

The southern-rock revivalists, as they’ve become known, have been on the road for the past few years playing for fans around the country with 100 plus shows both headlining and opening for iconic acts like the Charlie Daniels Band, Travis Tritt, the Marshall Tucker Band and many more. Scooter Brown Band is managed by David Corlew and booked by APA Nashville.

About Scooter Brown Band
After 4 years and 3 months, 2 tours overseas with 1 tour of combat in Iraq as a United States Marine, Scooter Brown traded his guns in for guitars and hit the road. Scooter Brown Band was formed and began playing mainly in and around Houston, Texas. Along with their growing notoriety came their first radio single “Apology.” Other regional radio releases were soon to follow and include “Whiskey Talkin”, “Soldiers Christmas Eve”, “Feels Like Home,”, and “Summer Song”. The band has released a number of independent albums, strengthening their chops in the studio, however they truly shine in their live show. SBB has toured the country and opened for some of their biggest influences including  Charlie Daniels Band, Travis Tritt and the Marshall Tucker Band, just to name a few. For the last year the band has been building a new era in their career and are gearing up for the release of their newest project this Fall — defining modern southern rock.

More in this category: « Snow Leopards No Longer Considered ‘Endangered,’ But Scientists Urge Extreme Caution Eileen Smulson Founder & Director of Operation Blankets of Love will join Jon & Talkin' Pets 9/16/2017 at 5pm EST to discuss their efforts to help victims of Hurricanes Harvey & Irma and the fires on the West Coast »
back to top