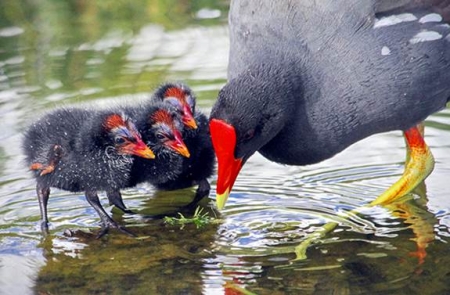 (Washington, D.C., August  17, 2017) Endangered ‘Alae ‘Ula(Hawaiian Common Gallinule, a subspecies of Common Gallinule formerly called Hawaiian Common Moorhen) are among the latest documented victims of feral cat predation on the Hawaiian island of Kaua‘i. The pair of breeding adults was attacked and killed while sitting on their nest in a national wildlife refuge in late April. With no adults left to tend the nest, the birds’ remaining three eggs and two hatchlings did not survive. The incubating parents of two more nests were killed by the same feral cat on April 22 and May 19, and six more eggs subsequently failed to hatch. The feral cat is still at large.

The attacks were captured on remote cameras installed by the U.S. Fish and Wildlife Service (FWS) in partnership with American Bird Conservancy (ABC). This predation by cats on endangered birds represents a major setback for conservation efforts and is a harsh reminder of the dangers feral cats and other invasive animals create for Hawai‘i's native species.

“Feral cats, whether they are dumped on the wildlife refuge by irresponsible owners or they find their way onto the refuge from nearby feral cat feeding stations, are having a very significant and tragic impact on Hanalei National Wildlife Refuge's endangered birds,” said U.S. Fish and Wildlife Service Deputy Project Leader Michael Mitchell. “Throughout Kaua‘i, natural resource managers are doing everything they can to save our native birds. But some species are running out of time, and extinction is forever.”

The recent attacks are among the latest in a long line of killings of endangered Hawaiian birds by feral cats, a non-native species. Unpublished data collected by FWS employees have documented at least 252 suspected cat kills of Hawaiian Common Gallinules, ‘Alae Ke‘oke‘o (Hawaiian Coots), Ae‘o (Hawaiian Stilts), Koloa Maoli (Hawaiian Ducks), and Kōlea(Pacific Golden-Plover) in Hanalei National Wildlife Refuge between 2012 and 2014. Seabirds are similarly at risk, especially while in the nest. Feral cats were suspected in the deaths of 22 Laysan Albatross chicksduring a 3-week period in 2015. Recently, a feral cat was caught on camera killing and dragging an endangered ‘Ua‘u (Hawaiian Petrel) out of its nest by the Kauai Endangered Seabird Recovery Project (KESRP), an incident that is unfortunately recorded with regularity in remote seabird colonies on the island.

According to KESRP Coordinator Dr. André Raine, “Feral cats are one of the worst of the introduced predators on the island of Kaua‘i — they are widespread throughout the island, are highly adept predators, are capable of killing large numbers of birds in a very short period of time, and regularly kill breeding adult birds, which makes their long-term impact on a breeding population even more devastating.”

“The continued losses of Kaua‘i's unique and endangered birds to cat predation are unsustainable,” said Grant Sizemore, ABC's Director of Invasive Species Programs. “With even wildlife refuges no longer safe from cats, the time has come to pass a comprehensive cat ordinance — such as that recommended by Kaua‘i's Feral Cat Task Force — to encourage the responsible care of pets and safekeeping of wildlife.”

The task force, which included stakeholders from animal welfare, conservation, and community members, submitted its recommendations to the County Council in March 2014. Those recommendations include setting a goal of “zero feral, abandoned, or stray cats” and implementing practical solutions such as sterilization and confinement as key strategies for addressing the cat, wildlife, and human health concerns associated with free-roaming cats. Those concerns include toxoplasmosis, an infectious parasitic disease that may be spread to humans and wildlife through cat feces and which has been linked to deaths in endangered Nēnē (Hawaiian Goose) and Hawaiian monk seals. A report prepared for the Hawai‘i Department of Health in 2000 suggested that feral cats are the “highest collective risk factor [for toxoplasmosis] and require further attention and action from a ‘holistic public health perspective.’”

Bottom photo: Remote camera image of feral cat preying on Hawaiian Common Gallinule nest, April 22, 2017. Cameras were installed by the U.S. Fish and Wildlife Service in partnership with ABC and are run by B. Webber.

More in this category: « PRATT INSTITUTE NAMED NEW WESTMINSTER ART CONTEST PARTNER Traveling With Your Pets: Dos and Don’ts »
back to top

We have 521 guests and no members online