Tamilee Webb, Buns of Steel, will join Jon and Talkin' Pets 8/19/2017 at 630pm EST to discuss and give away shirts and towels from Arctic Cool Featured 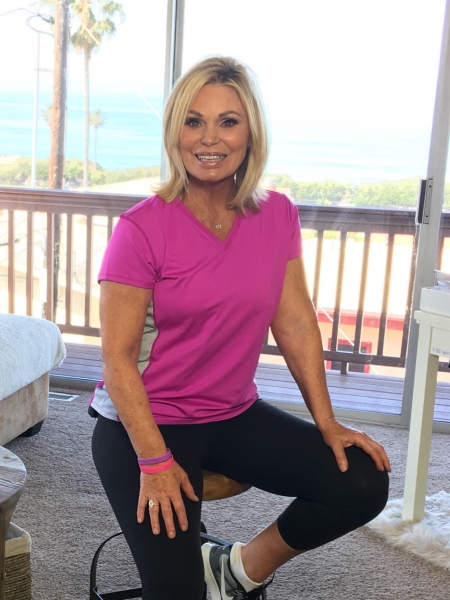 STAY COOL FOR SUMMER AND BEYOND.... WITH THE FASTEST GROWING APPAREL BRAND ON THE MARKET... @ARCTICCOOLGEAR

ARCTIC COOL, www.arcticcool.com, the fastest growing fitness apparel on the market today IS ALL THE RAGE RIGHT NOW. Lightweight, cool, and comfortable, this online fitness apparel brand has taken the apparel market by storm! ​… and now also coming out with accessories such as visors, and headbands, long-sleeve items, and children’s apparel!

They were recently seen on Mario Lopez and have also been championed by Fitness Icon, Tamilee Webb(www.tamileewebb.com), star of ‘Buns of Steel’ who is here with us today!

ABOUT TAMILEE: One of the most popular fitness icons of the 1990s, Tamilee Webb is best known for her role as the STAR of Buns of Steel. Having 21 titles, the series sold close to 14 million, and Tamilee became known as one of the greatest household names in fitness. In 2008, she was inducted into the Fitness Hall of Fame, and also has received numerous awards such as the IDEA fitness award for instructor of the year.

Tamilee is continuing her quest for fitness as she works on the following projects:

...And has partnered with the hottest fitness apparel brand in the market, Arctic Cool.

ARCTIC COOL, www.arcticcool.com, the fastest growing fitness apparel on the market today IS ALL THE RAGE RIGHT NOW. Lightweight, cool, and comfortable, this online fitness apparel brand has taken the apparel market by storm! ​

The brand has seen amazing digital traction as it is an affordable, lightweight, and solution-based brand that keeps the body cool while working out. The shirt will actually cool down to 30 degrees cooler, keeping the body cool during summer runs, menopausal sweats, and situations involving extreme heat ​using the #HydroFreezeX technology.

approximately 10 years old, 3 years old when I adopted her from Holly’s Garden Rescue http://www.hollysgarden.com/index.html. Izzie was picked up on the streets of San Bernardino CA, she was matted and her front right leg was mangled.  She was taken to a high kill shelter where she was then rescued by Susan of Holly’s Garden, after no one claimed her in 10 days.  She needed her leg amputated and to be spayed.  I had lost a dog to a coyote a month before and my second dog (Pug/Boston mix) was blind and depended on her.   After consulting with experts, I was advised to get another dog (not a puppy) that my blind dog would like.  That is when I went on Pet Finders and saw Izzie with big beautiful eyes.  My blinded dog loved her immediately which made it easy.  I had no idea that she was missing a leg when I saw her, not that it matter.  Three months afterwards, my blind dog passed or kidney failure and then it was just the two of us.  She went everywhere with me and enjoyed traveling and meeting people.  She just wanted love and food, lots of food.  This past March, Izzie got an ulcer in her left eye and it had to be removed.  She now is a 3 legged 1 eye dog that is so happy.

Born Oct 7, 2013.  Came to us before Christmas in 2013.  After four years of just me and Izzie, it was time to enhance our family dynamics with a funny breed and that is Boston Terriers.  He Keeps us laughing, always full of energy, sometimes too much and loves his sister. He enjoyed attending Agility course at six months to direct his energy. Today he attends Camp 4 dogs once a week to keep him socialized with other dogs.  He is a gentle spirit with lots of energy and ready to play at all times.

This little kitten was at one of our local shelters which I adopted for my Mother as a Christmas gift (yes she wanted a kitten).  However, the kitten had to live with us for three weeks before Christmas.  During this time, BrunoMars and her became best of friends and played together, slept together and I didn’t have the heart to separate them, so we kept her, named her KittyGaGa since we had been calling her ‘kitty’ and adopted another kitten a week before Christmas for my Mom.

ABOUT Arctic Cool:  www.arcticcool.com is the fastest growing US apparel company that incorporates cooling technology into it’s apparel. Arctic Cool is an American company, and is owned and operated from the United States.

ABOUT ARCTIC COOL: Arctic Cool developed #HydrofreezeX Cooling Technology for dynamic sweat wicking, dispersion, and supplemental evaporative cooling that occurs between the fabric and the skin. Hydrofreeze serves as the best of both fabric worlds while stepping onto a higher plane of apparel science.

The technology functions by using your body’s natural cooling process during high-energy activities. Sweat activates the fabric and is initially wicked away from your skin. Hydrofreeze then disperses the moisture throughout the clothing fibers, keeping all areas equally dry.

Keepin it Cool During the Summer: Arctic Cool The Hottest New Fitness Apparel Brand on the Market with #HydroFreezeX Cooling Technology & UPF50

The hottest activewear on the market is making national waves: Arctic Cool sells over 100K shirts to date and launches new long sleeve line and is endorsed by Star of Buns of Steel Tamilee Webb

HOUSTON, June 29, 2017 /PRNewswire-USNewswire/ -- With its official company launch on June 6, 2016, Arctic Cool (www.arcticcool.com) has been in the market for a year now and has sold over 100K shirts to date. Arctic Cool is helping athletes, influencers, and sports enthusiasts at large combat the summer heat through the release of its newest technology and active "cooling" shirt and technology, #HydroFreezeX.  Arctic Cool (www.arcticcool.com) developed #HydroFreezeX Cooling Technology for dynamic sweat wicking, dispersion, and supplemental evaporative cooling that occurs between the fabric and the skin. #HydroFreezeX serves as the best of both fabric worlds while stepping onto a higher plane of apparel science. The technology functions by using your body's natural cooling process during high-energy activities. Sweat activates the fabric and is initially wicked away from your skin. #HydroFreezeX then disperses the moisture throughout the clothing fibers, keeping all areas equally dry.

The brand has also been seen to aid in instances when individuals are working in extreme heat during the summer and also has been seen on celebrity influencers such as Mario Lopez, Star of Buns of Steel --Tamilee Webb (www.tamileewebb.com), Health & Wellness Author of the 5 Day Real Food Detox, Nikki Sharp (www.nikkisharp.com), RawFood and YouTube Celebrity, Kristina Carrillo-Bucaram of FullyRaw (www.fullyraw.com), fitness enthusiast and Hispanic personality, Maria Teresa Guerrero (www.laflacaguerrero.com), 5x Mr. Universe bodybuilder and fitness coach, Dewayne Malone (www.dewaynejmalone.com), and NFL athletes such as Charles James II.

For More information on the product, visit: www.arcticcool.com. Find us on social at @ArcticCoolGear

More in this category: « Important Message from my dear friend Linda Blair Author Shawn Flynn, will join Jon and Talkin' Pets 8/19/2017 at 5pm EST to discuss and give away his book "The Kitty Who Rescued Me After I Rescued Him" »
back to top