Good News for Brazilian Bird on the Brink Featured 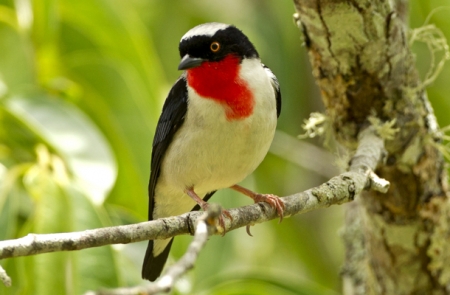 New Reserve May Stave Off Extinction for Cherry-throated Tanager

(Washington, D.C., June 5, 2017) The critically endangered Cherry-throated Tanager, which numbers as few as 30 individuals, has gained a much-needed refuge in Brazil’s threatened Atlantic Forest. The 4,171-acre (1,688-hectare) private natural heritage reserve, not yet named, protects essential habitat and provides a lifeline for the species.

The Cherry-throated Tanager went unseen for more than 50 years and was believed to be extinct in the wild until 1998, when it was sighted again in privately held, well-preserved forest patches in the Caetés region of Espírito Santo. Protecting every possible acre is important in Brazil’s Atlantic Forest, where only about 10 percent of original habitat remains.

SAVE Brasil worked with Grupo Águia Branca, one of the country’s largest transportation and logistics companies, to create this private reserve. SAVE has also been working with the state government to create a 10,625-acre (4,300-hectare) wildlife refuge adjacent to the private reserve, and American Bird Conservancy (ABC) supported SAVE on the public consultation process in 2016. ABC and SAVE’s support of the government on outreach for the wildlife refuge also helped in the creation of the private reserve.

“We hope that creation of the new reserve will accelerate the process of establishing the wildlife refuge,” said Dan Lebbin, ABC’s Vice President of International Programs. “With a total of nearly 15,000 acres (nearly 6,000 hectares), these two protected areas would contribute much-needed hope for the tanager’s survival.”

Cherry-throated Tanager occurs primarily in the forest canopy at elevations between approximately 2,800 to 4,000 feet (850 to 1,250 meters). Single individuals or groups of up to 10 birds can be found, occasionally associated with mixed-species flocks. The population may be as high as 250 but is more likely closer to 30 individual birds left in the world. Recent sightings have been of small groups of two or three tanagers observed at the same site.

As few as 30 Cherry-throated Tanagers are left in the world. Photo by Ciro Albano

SAVE Brasil (Society for the Conservation of Birds in Brazil) is a non-profit, non-governmental organization dedicated to the conservation of Brazilian birds and nature. Following a participatory approach, we work together with governments, civil society organizations, universities, business and communities to develop and implement strategies, programs, and actions that contribute to a better, healthier and more beautiful planet for animals, plants, and people.

We have 440 guests and no members online