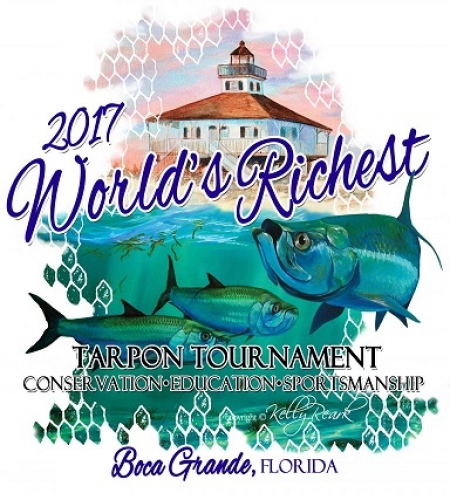 Nestled between Sarasota and Fort Myers on Southwest Florida’s Gulf Coast, the Punta Gorda/Englewood Beach area is a premier Florida ecotourism destination offering the best of Florida’s world-class fishing all in one place. With inshore mangroves, grass flats, open waters in the harbor, and the offshore action in the Gulf of Mexico, the area offers several different ways to experience Florida fishing at its finest. Of which, one of the area’s best-kept secrets is how great tarpon fishing is in Charlotte Harbor during the summer months, this year being no exception!

This May, avid anglers from all over of Florida (and across the globe) will visit Charlotte Harbor and Boca Grande Pass with hopes of reeling in the silver king at the The World’s Richest Tarpon Tournament. This year marks the 35th anniversary of the two-day tournament, which boasts $80,000 in prize money and is being held on Thursday and Friday, May 25-26. Festivities begin on Wednesday evening with the annual Captains’ Meeting, where captains and anglers gather to discuss the rules of the tournament and socialize before the competition begins. Fishing will take place on Thursday and Friday in Boca Grand Pass. Festivities will commence with an awards ceremony held downtown on Friday night.

The sport fishing fun and competition in Charlotte Harbor though isn’t just for the grownups this summer. Kids can reel in big fun and fish too at the Gasparilla Island Kids Classic Tarpon Tournament, which will be held Saturday, June 10. The world’s greatest kids fishing tournament for children ages 15 and under, not only will 100 percent of the entry fees be donated to charities helping other kids and families, but more than $10,000 in prizes will be awarded to participating captains and anglers. In addition to the tournament competition, there will be complimentary food and drinks, exhibits, and a family interactive art show.

Internationally renowned as one of the world’s top sport fishing destinations, Punta Gorda/Englewood Beach’s Charlotte Harbor sits on Florida’s second-largest marine estuary and is often referred to as the Tarpon Capitol of the World. Peak season for tarpon fishing is May – June; however, the destination is a year-round ecological breeding ground for numerous fish, such as Snook, Redfish, Grouper, Snapper, King Fish, Barracuda and Mackerel.

Throughout the year, more than 25 experienced fishing guides and charter services are available that cater specifically to the fly fishing angler and all other methods of fishing. Some of our top picks include: Captain Ralph Allen with King Fisher Fleet, Captain Josh Greer with XXL Outdoors, and Captain Les Hill.

More in this category: « Author of "How Can I Get Better", Dr. Richard Horowitz will join Jon and Talkin' Pets 5/06/17 at 5pm EST to discuss and give away his book dealing with Ticks and Lyme Disease News from Mercy For Animals »
back to top

We have 956 guests and no members online